Recology blazes a trail to zero waste with recycling and food composting programs.

In 2008, San Francisco reached a landfill diversion rate of 77 percent, the highest of any city in the United States. It still is.

The story behind that important accomplishment is the story of a trash company doing its best to render trash extinct — San Francisco-based Recology, Inc., formerly Norcal Waste Systems, Inc.

Owned 100 percent by its employees, Recology people don’t seem to believe in trash. “My father was a garbage man, and when I was growing up, I couldn’t understand why people threw all that stuff out,” says Mike Sangiacomo, Recology’s president and CEO.

Can a trash company thrive when its executives think people throw out too much trash? The numbers would seem to indicate that it can. 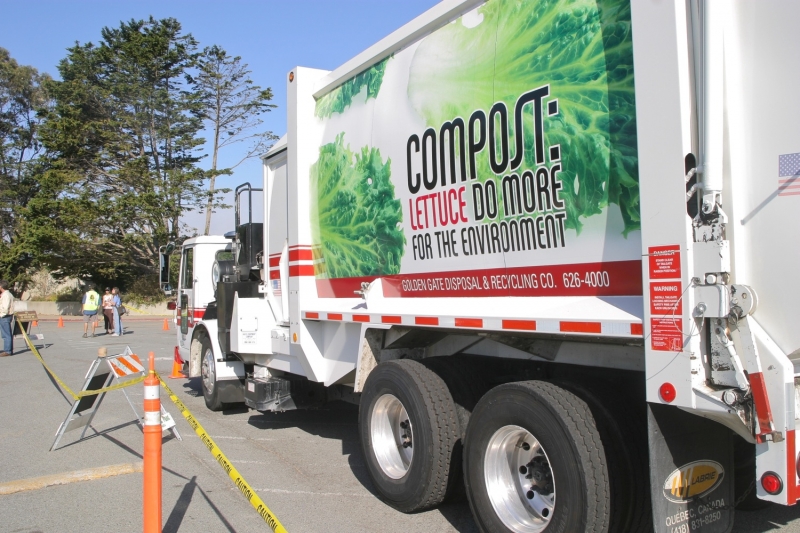 In 2010, Recology generated $539 million in annual revenues, up from $350 million in 2000. Today, the company employs 2,600 people and operates 1,300 collection trucks in more than 50 cities, mostly in Northern California, with several recently acquired municipal customers in Oregon.

The idea that people shouldn’t throw all that stuff out is exactly what San Francisco needed in 2002, when city officials set out to achieve zero waste by 2020.

The goal was set in response to a serious problem that threatened to send the city’s trash disposal costs spiraling out of control. “We were probably the first city in California to run out of close-in disposal capacity and begin exporting waste,” Sangiacomo says.

With no room for another landfill, city officials deemed it too expensive to transport trash to remote landfills and sought alternatives.

Recology provided one: Instead of exporting trash, the company would help the city pare down its waste stream through recycling and composting.

In 2000, San Francisco was already almost halfway to zero waste. It had to be. In 1989, a California law required local jurisdictions to divert 50 percent of their waste streams by 2000. A combination of existing programs plus creative, new programs, including food composting, drove the rate up to 77 percent. To date, the company has introduced more than 20 programs.

Recology-San Francisco, the local operating company, touches about 3,000 tons of San Francisco garbage per day, half of the city’s total. Other recyclers handle the rest.

Recology’s half is critical to getting to zero waste. It includes the toughest diversion chores: all residential and commercial putrescible waste — the compostable material — and all residential curbside recycling and trash as well as the lion’s share of commercial trash and recycling. Recology also collects most of the city’s construction and demolition (C&D) recycling and processes it in its dedicated C&D material recovery facility (MRF). 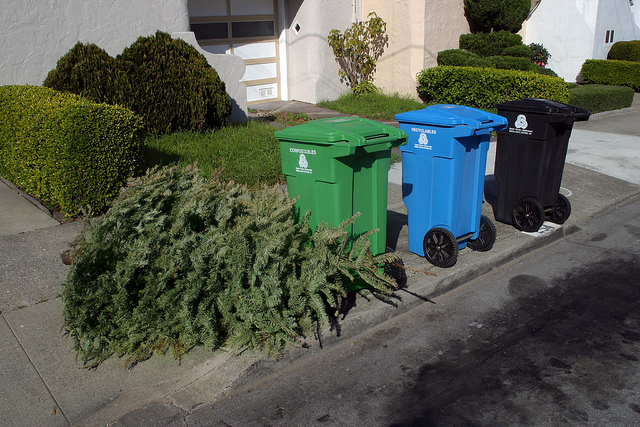 The company collects from 350,000 single-family customers, including 200,000 in single-family to five-unit structures, and 150,000 in multifamily structures with six or more units. Recology’s commercial collection accounts number 15,000.

Residents receive three color-coded containers: a blue 64-gallon cart for co-mingled single stream recyclables, a green 32-gallon cart for food scraps and other compostable waste, and a black 32-gallon cart for trash. Basic residential service costs $27.55 a month, a fee set by the city.  Residents who want larger recycling and composting carts receive them at no additional charge and no increased collection fee. Larger trash carts do incur fees.

Businesses use the color-coded containers, too, sized to their needs. Commercial customers can earn discounts of 50 percent or more by diverting more trash to composting and recycling.

On “Clean Team Saturdays,” residents can drop off items too big for regular bins. At the transfer station, Recology pickers scrutinize loads brought in by self-haulers. They pull items in good condition, have them reconditioned and deliver them to thrift stores.

A new program reduces the need for take-out food packaging. Called BYOC, short for “bring your own container,” it promotes reusable take-out containers.

Something Else to Chew On 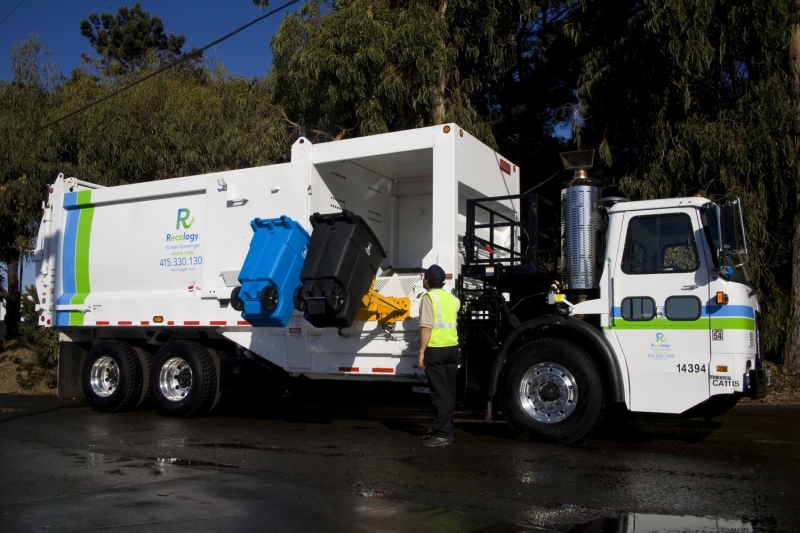 Recology rolled out a food scrap composting program in 2002, distributing green containers for food scraps, soiled paper and plants to residents and businesses. On the streets, automated compost collection trucks began following the automated split-bin co-collection trucks that pick up recycling and trash.

The program turbo-charged the diversion rate. In 2002, it surged to 62 percent from 52 percent. The rate climbed for six more years, reaching 77 percent in 2008.

In 2009, the city made recycling and composting mandatory and gained more ground. “The mandate increased composting from about 400 tons per day to 600 tons per day,” said Robert Haley, zero-waste manager with SF Environment, the environmental management department for San Francisco in an email. Those numbers have not been factored into a new diversion rate.

Days of Wine and Refuse

Outreach programs aimed at keeping people focused on recycling and composting are also part the zero-waste drive. The composting program helps mightily in this because the community is proud of the end product.

Recology’s compost collection trucks deliver material to Jepson Prairie Organics, a subsidiary of Recology near Vacaville, Calif. Jepson Prairie makes four compost blends developed by Bob Shaffer, a Honaunau, Hawaii-based agronomist who provides consulting services through Soil Culture Consulting. More than 200 vineyards in Northern California buy the blends and use them to feed the soil. Shaffer makes sure the compost fits the vineyard. 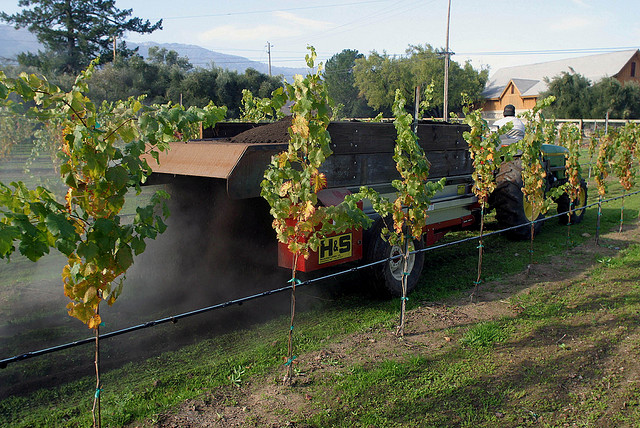 “We do soil analysis at the vineyards to learn what the soil needs,” he says. “Then we add minerals and other materials to the vineyard’s blend.”

The vineyards say the product reduces the need for agricultural chemicals and improves the quality of the soil. A number of wineries credit Jepson Prairie compost on their labels.

In a landfill, of course, food scraps decay and (unless captured or flared) release methane, a carbon-based greenhouse gas, into the atmosphere. Compost helps to sequester carbon in the ground.

Recology outreach activities credit San Francisco for the environmental benefits of compost, tapping into the community’s pride to keep the diversion rate moving up.

Composting for vineyards isn’t Recology’s only outreach program to take an unconventional approach. Spectacular 3D graphic renderings of garbage, recyclables and food scraps virtually leap off the sides of Recology collection trucks, giving onlookers a cutaway view of what might be inside.

Since 1990, Recology has sponsored an Artist in Residence program at SF Recycling and Disposal, the city transfer station, which is colloquially referred to as “The Dump.” More than 65 Bay Area artists have completed residencies in the program, which encourages conservation and promotes appreciation for the environment. For instance, in May, artist Paul Cesewski held an exhibition that created carnival attractions out of found and recycled materials.
In both cases, the goal is the same: keep composting and recycling on everyone’s to-do list.

San Francisco’s diversion rate stood at 77 percent in 2008. The 2009 figure, which city officials say is up slightly, had not been announced at this writing. San Francisco’s Haley says the reason for the delay in reporting the diversion rate is that it takes the state 18 months to process and release certain data needed for the calculation.

Haley also reports that the city plans to stop reporting diversion rates. “We want to focus on driving down the disposal number from now on,” he says. “So we’re going to start reporting the disposal rate. The state tracks disposal numbers by jurisdiction and can make them available within about six months.” 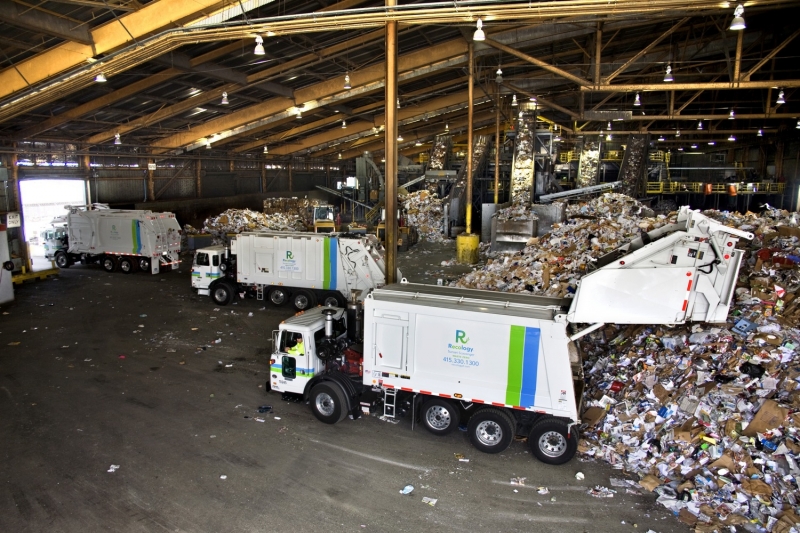 Where will future disposal reduction come from? “Analyses of loads being landfilled show that we’re still sending recyclables and compostables to the landfill,” Sangiacomo says.  “If we take that material out, we’ll get to 90 percent.”

Diverting those materials will involve identifying particular products and figuring out how to remove them, continues Sangiacomo. For instance, the concept of product stewardship might help. If manufacturers make products that frustrate recycling or composting efforts, governments may ask them to rethink their designs. “For instance, carpet is difficult to recycle,” Sangiacomo says. “Manufacturing with more uniform materials could solve this problem.”

Recology also works for 50 plus cities, mostly in Northern California, with a handful in Oregon. Every California customer satisfies the 50 percent diversion law, and many have surpassed it.

Yuba Sutter in north central California diverts 72 percent of its waste. “Yuba Sutter takes advantage of all the programs we offer,” says Sangiacomo. “Many cities we work with are satisfied with 50 percent and use fewer programs.”

Zero waste isn’t for everyone. Some find it too expensive. 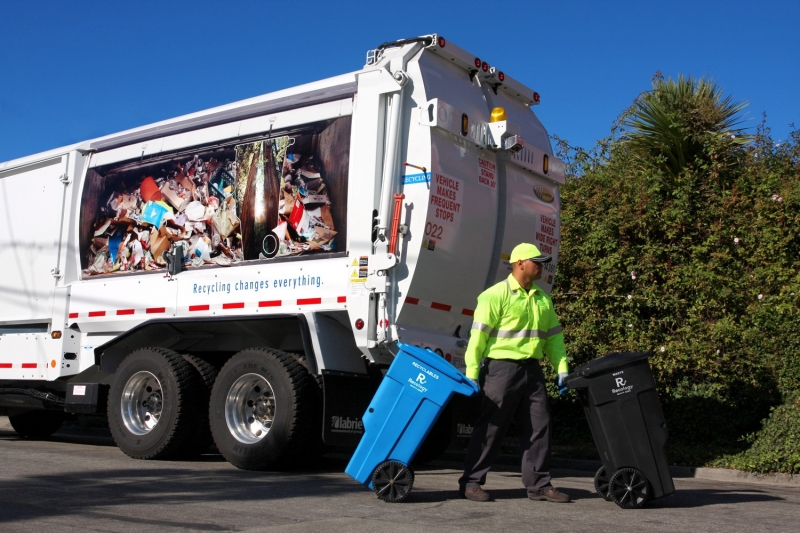 But one day, says Sangiacomo, trash may become too expensive. “I see no end to landfill tipping cost increases,” he says. Tighter regulations will continue to drive landfill operating costs faster than inflation. At some point, cities will look for alternatives, just like San Francisco looked for alternatives a decade ago.

It may be starting. Recology’s San Francisco facilities are crowded with visitors from across the United States and around the world who want to learn Recology’s techniques. Officials from Argentina, Australia, Brazil, Ireland, Italy, several countries in Southeast Asia and the U.K. have toured the facilities.

Seattle and Portland are copying elements of Recology’s composting and recycling programs. So are 300 colleges and universities across the country.

Every day, it seems, somebody else wonders why we’re throwing all this stuff out and goes to talk to Recology about it.

SIDEBAR: The Scavengers That Started Recology

Over time, the scavenger teams consolidated. In 1920, one consolidated group formed the Sunset Scavenger Co. which provided residential and commercial recycling and trash collection in mostly residential areas of San Francisco. 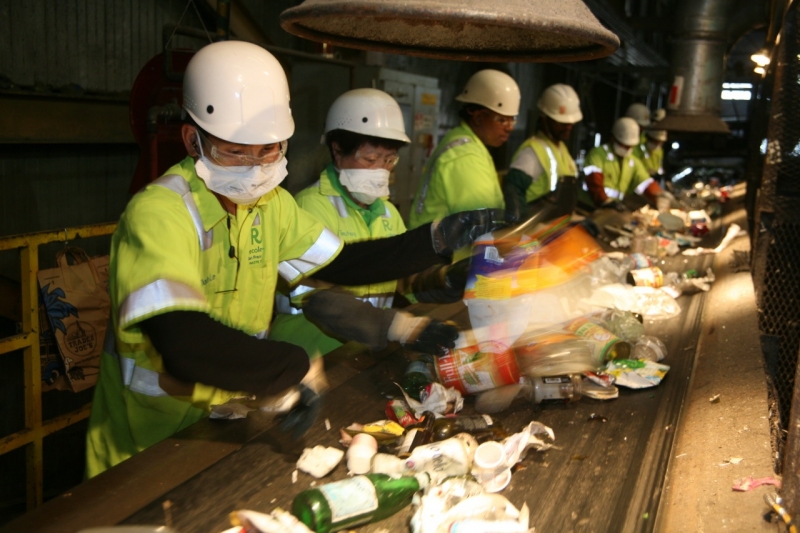 The following year, another group incorporated as the Scavenger’s Protective Association. That company serviced both residential and commercial customers in the city’s mostly financial and commercial districts.

SIDEBAR: A Challenge to the San Francisco System

The City of San Francisco has managed solid waste and recycling under a permit system for nearly 100 years. Each permit authorizes its holder to provide collection services to a certain residential area of the city. In 1921, a ballot initiative expanded the number of permits to 97. Two companies, both now part of Recology, held most, though not all, of the permits.

Then in 1932, a city ordinance expanded the permit system to include commercial collections and essentially capped the permits. From then on, the city would issue new permits, which would enable new collection companies to work in existing permitted areas, only if service was inadequate.

In the summer of 2011, a private group collected 12,000 signatures and succeeded in creating a ballot initiative that will challenge the existing system in a public vote next June. If passed, the initiative will radically alter San Francisco’s waste and recycling program. It would replace the permit system with a system requiring the city to enter into separate contracts for residential collections, commercial collections, transfer and transport, processing recyclables and disposal. —Mike Fickes

A Foothold in the Emerald City

In early October, Recology Inc. and Seattle-based CleanScapes merged their operations. CleanScapes serves about half of Seattle, as well as nearby cities of Shoreline and Des Moines. The company had 2010 revenue of $47.3 million and employs about 260. CleanScapes also provides exterior custodial services in Portland, Ore., and San Francisco. The deal is subject to regulatory approval

“Recology and CleanScapes are a great match,” said Mike Sangiacomo, president and chief executive officer of Recology, in a news release. “Both companies are committed to innovation and helping the communities we serve achieve unparalleled recycling rates. We also share a strong commitment to community; hiring from the communities we serve and supporting education, art and volunteer programs. We look forward to working with CleanScapes in the Northwest.”

Sangiacomo noted in an interview that the geographic expansion into Seattle also is valuable. “It’s one more place we can go into,” he says, adding, “We like the people they got,” and the intention is to keep the current staff. —Allan Gerlat, News Editor