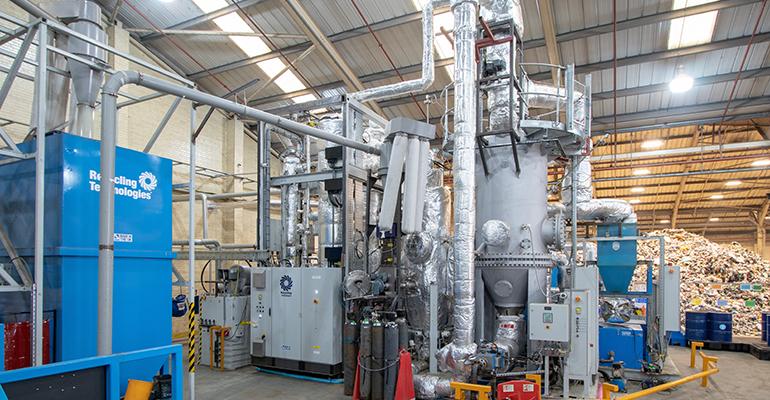 Feedstock recycling has become more globally applicable with places like the U.K. and U.S. looking at emerging technologies to recycle plastics.

Recycling Technologies converts plastic waste into a wax/oil product called Plaxx. The mixed plastics waste is shredded and fed into a chamber where the material is heated up in the absence of oxygen to break the waste plastic down into a vapor. This is distilled into Plaxx, which can be used in the manufacture of new wax and plastic products.

“As citizens, we all want to do more and take action on plastic waste,” says Adrian Griffiths, CEO and founder of Recycling Technologies. “As a result, the engagement in the trials by the shoppers has been very strong.”

Tesco has started collecting soft plastics that are difficult to recycle in 10 of its stores as part of a trial with Recycling Technologies. Customers will be able to return to trial stores everything from pet food pouches to shopping bags and crisp packets, all of which cannot commonly be recycled. 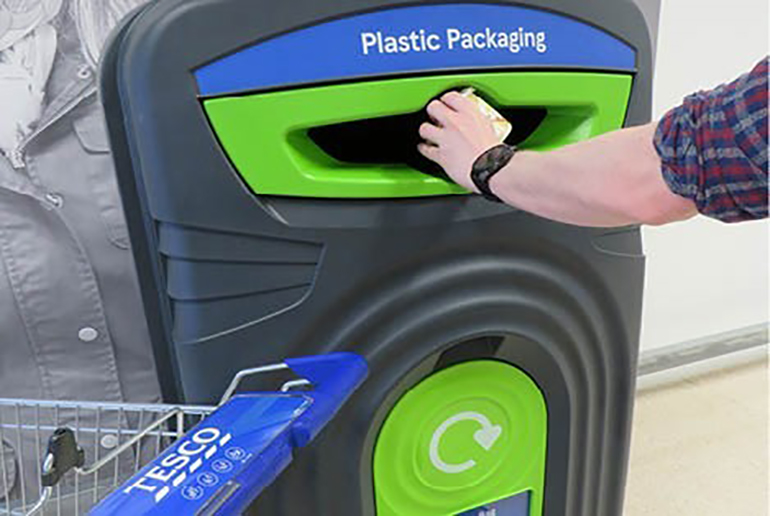 “Reducing and recycling plastics is such an important issue for us, for customers and for the future of our planet. That’s why we are working hard to reduce the amount of packaging in our stores and have committed that all remaining packaging will be recyclable by 2025,” said Sarah Bradbury, director of quality for Tesco, in a statement. “Our trial with Recycling Technologies will make even more of our packaging recyclable and help us reach our target. This technology could be the final piece of the jigsaw for the U.K. plastic recycling industry.”

The end goal of the trial is to show that the technology does exist for recycling these soft plastics and keeping them in the economy but out of landfill.

“Ultimately, the success of the trials will show the urgent need for the U.K. to deepen and broaden its waste recycling infrastructure across the U.K., with technologies for soft plastics recycling playing a part,” says Griffiths. “In the future, local authorities across the U.K. will be able to collect ‘all plastics in one bin’ at the curbside, making it very convenient for householders to do more because the technology will exist to genuinely recycle it here in the U.K.”

This partnership came about as part of Tesco’s efforts to make all its packaging recyclable, creating a closed loop by preventing packaging from going to waste.

“Recycling Technologies will await an analysis of the trial in the coming months and work with Tesco to assess plans going forward,” says Griffiths. “Tesco is one of many retailers who have committed under the U.K. Plastics Pact to four objectives, one of which is to make all its plastic packaging recyclable, compostable or reusable by 2025.”

Recycling Technologies plans to mass produce its RT7000 machine to recycle waste anywhere in the world, converting the hard-to-recycle plastics into oils for use in manufacturing new polymers.