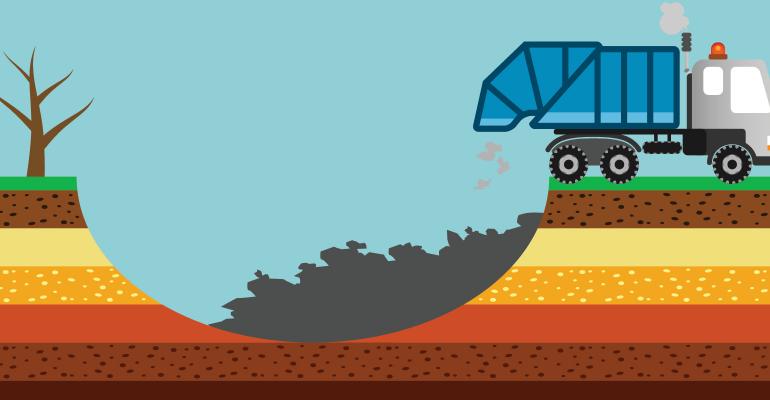 Here’s a look at how landfill companies can leverage the Internet of Things, remote monitoring and control technologies to make their day-to-day operations run more efficiently.

“The three technologies work together with remote monitoring generating the data, control technologies allowing remote and automatic control of equipment and systems, and the IoT is the information management system or brains to analyze and store system data on which system management decisions are based,” says Christopher Lund, senior vice president and owner of Gershman, Brickner & Bratton, Inc., based in Mclean, Va.

“These three technologies have the capabilities to revolutionize the landfill industry by reducing operations and maintenance cost and by reducing environmental liabilities and their associated costs,” says David P. Hostetter, regional manager for SCS Engineers’ Remote Monitoring and Control (RMC) Group, based in Long Beach, Calif. “Beyond this, the data collected by these systems has the potential to help further improve the operations of the landfills by helping landfill managers, operators and engineers to make more informed decisions.”

With proliferating IT analytics, cloud computing, smart devices and apps, IoT is rapidly connecting businesses, processes and people on a scale that was previously inconceivable. Research from McKinsey estimates that IoT applications could deliver a potential economic impact of as much as $11.1 trillion per year by 2025, notes Lund.

“IoT revolves around increased machine-to-machine communication,” he says. “Built on cloud computing and networks of data-gathering sensors, it delivers a mobile, virtual and immediate connection to conditions of the landfill. And it has the power to make all landfill equipment and systems ‘smart.’”

Lund says IoT is being utilized in multiple ways at landfills and is growing—from providing instantaneous compactor waste placement and waste density management data through GPS, drone mapping that includes not only topographic information for grading and stormwater management but also thermal imaging to correlate with gas well readings, and to leachate collection, removal and treatment.

Haney says that one of the biggest applications of this technology is the GPS monitoring systems on all of the heavy equipment.

“These systems monitor the operation of the piece of equipment and send email alerts in real time for a number of critical systems on these pieces of equipment,” she says.

For instance, there may be an alert that indicates a “high engine coolant temperature.” These systems also can alert companies to what machines need a preventive maintenance (PM) performed and which level and what supplies are needed to complete that work.

Remote monitoring is a growing application in the business, but currently, there are a number of sites that have an active gas collection system, says Haney.

“The regulations require that the flare be monitored every day. Landfills, unlike production facilities or plants, are not operable 24/7 and staff is not onsite at all times,” she says. “So many sites are beginning to utilize cameras that are integrated into monitoring software that can be remotely monitored to ensure that if anything happened to the flare, they would be aware and could respond to the situation.”

Three primary functions where remote monitoring is used at landfills include landfilling and compaction; leachate collection, removal and treatment; and gas collection and combustion systems, according to Lund.

“Remote monitoring is achieved on these systems by having remote sensors on the actual equipment, such as pumps or tanks, and having those sensors wirelessly communicate through the program logic control modules to a wireless modem communicating to the internet primarily through cell towers,” he says.

“These systems include but are not limited to blower/flare stations, pump stations, LFG wellheads, LFG to energy plants, air compressors, LFG probes, cameras, etc.,” he says. “Data is collected from these systems automatically and can be used to generate automatic alarms and reports, troubleshooting and reporting.”

Control capabilities are typically used for two reasons: to respond to off-hours issues with systems and to control multiple systems together. One example is a flare station shuts down unexpectedly; the client logs into the system and identifies what caused the shutdown, that no one is around the flare station, that it is safe to restart it and they remotely restart the flare, says Hostetter.

“In this example, all of the time and associated cost spent driving to and from the site is eliminated,” he says.

Control technologies are used to maximize airspace utilization through continuous real-time compaction monitoring provided to equipment operators for landfilling, Lund points out. They are also used to monitor leachate collection, storage and treatment systems to manage the performance of pumps, tank storage levels and effluent quality.

“Control technologies are particularly effective in inclement weather and storm event conditions that would necessitate continuous remote monitoring to react to failures in the systems bringing into operation backup and redundant systems when needed,” he says. “Control technologies also allow for set points to be established for automatic functioning of systems that do not require an operator to constantly manage and manually make controlled actions.”

Landfills are required to submit annual reports and have to include a calculation for airspace consumed and airspace remaining. Aerial topographic surveys have long been used to determine the topography of the site and the surveys from year to year and be compared to calculate total airspace used, soil consumed/stockpiled, etc.

“Drone technology is now being used to conduct these surveys. The drones are easier to deploy than an airplane. The clarity of the photos taken and the accuracy of the data captured is excellent. We are currently testing a new component of aerial technology utilizing thermal imaging,” says Haney. “The hope is that we can compare the thermal images, much like we do the aerial topography, as an indication of changes—potentially issues that may be occurring. Our site has been in operation for over 40 years, so to be able to look at the ‘heat signature’ of waste placed today versus waste that could be 20 years old is fascinating. The overall implications and application of this technology is yet to be fully determined.”

She says that the use of these three technologies allows operations to become more efficient, streamlined and robust.

“As with anything, change in ‘how we have always done it’ is a challenge,” she says. “There can be an initial economic impact that can be perceived as a negative, but once something has been implemented and the benefits are identified, the initial uptick in costs is often negligible to overall, long-term benefits.”

Lund says that one size does not fit all and these technologies can be introduced incrementally.

“When putting in new equipment and system hardware and controls, but not initially installing these systems, it would be important to have the planned capacity to expand, or add, these technologies at a future time,” he says.

“Like any other system, remote monitoring and control systems have to be adapted to fit each client’s specific needs,” he says. “They are not one-size-fits-all systems, so the challenge is to balance the system scope and budget, while taking into account the reduced costs that will result from the implementation of the system.”