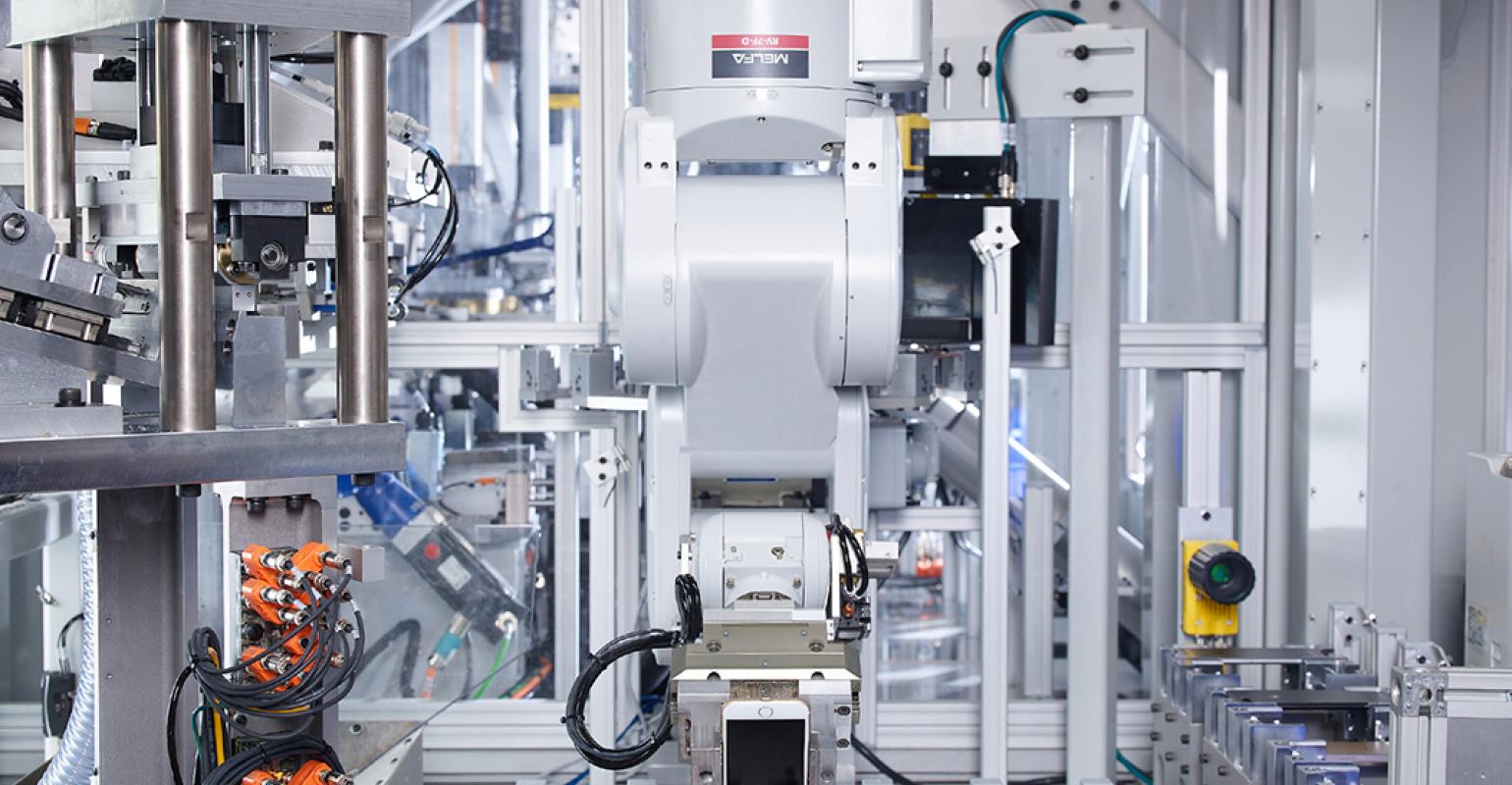 Apple has quadrupled the number of locations customers in the U.S. can send their iPhone to be dismantled by the company’s recycling robot.

Apple just announced a major expansion of its recycling programs, quadrupling the number of locations U.S. customers can send their iPhone to be disassembled by Daisy, its recycling robot. Daisy will disassemble and recycle select used iPhones returned to Best Buy stores throughout the U.S. and KPN retailers in the Netherlands. Customers also can turn in their eligible devices to be recycled at any Apple Store or through apple.com as part of the Apple Trade In program.

Apple has received nearly 1 million devices through Apple programs, and each Daisy can disassemble 1.2 million devices per year. In 2018, the company refurbished more than 7.8 million Apple devices and helped divert more than 48,000 metric tons of electronic waste from landfills.

“Advanced recycling must become an important part of the electronics supply chain, and Apple is pioneering a new path to help push our industry forward,” said Lisa Jackson, Apple’s vice president of environment, policy and social initiatives, in a statement. “We work hard to design products that our customers can rely on for a long time. When it comes time to recycle them, we hope that the convenience and benefit of our programs will encourage everyone to bring in their old devices.”

According to the company, Daisy is now able to disassemble 15 different iPhone models at the rate of 200 per hour, recovering even more important materials for reuse. Once materials have been recovered from Daisy, they are recycled back into the manufacturing process. For cobalt, which is a key battery material, Apple sends iPhone batteries recovered by Daisy upstream in its supply chain. They are then combined with scrap from select manufacturing sites and, for the first time, cobalt recovered through this process is now being used to make brand new Apple batteries. 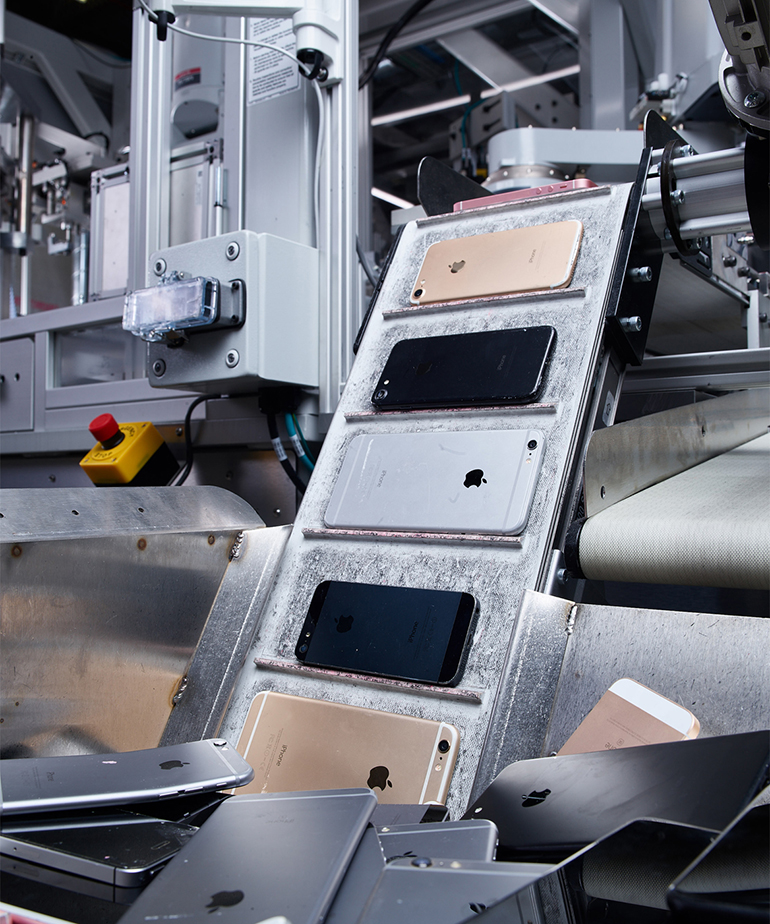 Apple also uses 100 percent recycled tin in a key component of the main logic boards of 11 different products. The company’s engineering of an aluminum alloy made from 100 percent recycled aluminum allows the new MacBook Air and Mac mini to have nearly half the carbon footprint of earlier models. Starting this year, aluminum recovered through the Apple Trade In program is being re-melted into the enclosures for the MacBook Air.

To further its research on recycling, Apple also announced the opening of its Material Recovery Lab dedicated to discovering future recycling processes. The new 9,000-square-foot facility in Austin, Texas, will look for innovative solutions involving robotics and machine learning to improve on traditional methods like targeted disassembly, sorting and shredding. The lab will work with Apple engineering teams as well as academia to address and propose solutions to today’s industry recycling challenges.

As part of its Material Recovery Lab, Apple has invested in large machinery typically used at e-waste recycling facilities. Daisy can take apart iPhones to recover materials such as cobalt, aluminum and tin, which are then recycled back into the manufacturing process. 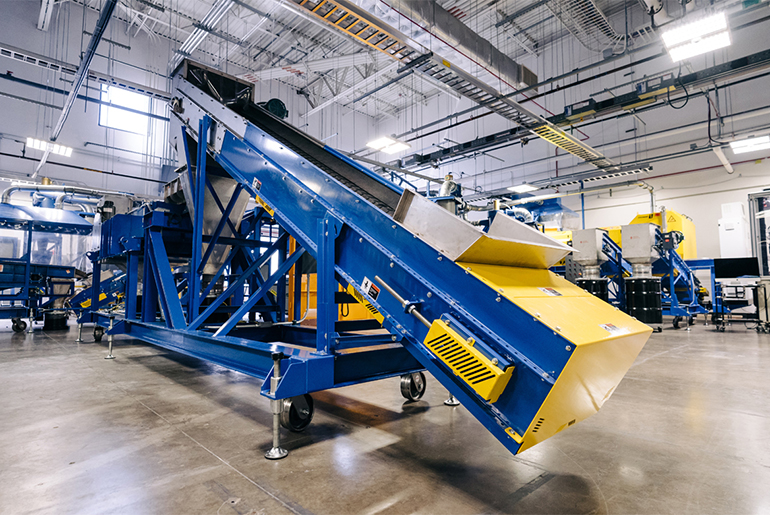 Apple said it continues to expand its programs to ensure devices are used for as long as possible. The number of Apple Stores and network of Authorized Service Providers has grown to more than 5,000 worldwide. Last fall, Apple rolled out a new method for optimizing iPhone screen repairs that allows thousands more independent shops to offer the service. Apple also launched a battery replacement and recycling program for all of its products.

On Earth Day, April 22, Apple released its 2019 Environment report, which contains additional information on the company’s climate change solutions, including its recent announcement that 44 of its suppliers have committed to 100 percent renewable energy for their Apple production. The company celebrated Earth Day with environmentally themed Today at Apple sessions at all Apple Stores and featured original stories and collections of apps and games on the App Store to help people honor the Earth and consider their role in the natural ecosystem. Apple’s Earth Day Challenge also encouraged Apple Watch wearers to complete any workout of 30 minutes or more to earn a special Earth Day Award and stickers for Messages.