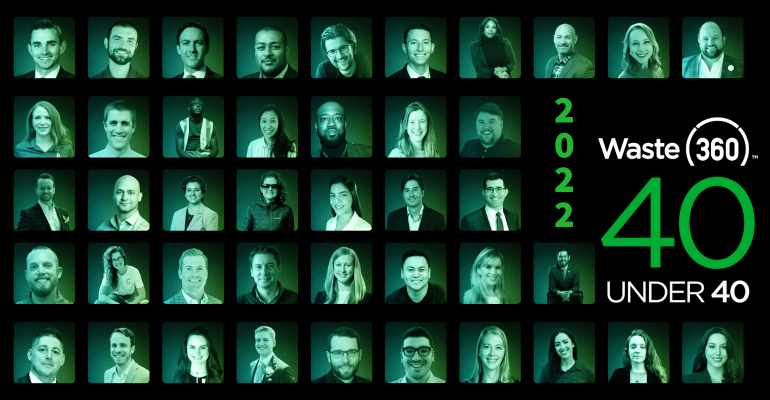 We are excited to announce the winners of the 2022 Waste360 40 Under 40 awards. This program recognizes inspiring and innovative professionals under the age of 40 whose work in waste, recycling and organics who have made a significant contribution to the industry. The winners are involved in every part of the waste and recycling industry, including haulers, municipalities, composters, recycling professionals, policymakers and product suppliers.

“Congratulations to this year’s class of Waste360 40 Under 40 award winners. Their innovative thinking is a testament to the immense talent in our industry,” said Liz Bothwell, Head of Content & Marketing and Waste360 NothingWasted! Podcast Host. “When selecting the winners, we were in awe of the outstanding work they are contributing to every sector of waste and recycling. We look forward to celebrating them at WasteExpo this spring.”

In addition to the 40 impressive young professionals who have won this year, Waste360 has recognized innovation with two additional winners of the Innovator and Changemaker Awards.

Ryan Melsert has been honored with the Waste360 Innovator Award, which recognizes innovators and forward thinkers who often use technology to better the industry. Melsert helped to form the startup American Battery Technology Company (ABTC) as Chief Technology Officer in 2019 and rose to CEO in 2021. Under his leadership, the company has progressed quickly toward completing its first pre-commercial plant and he received several U.S. patents for his technology. He also won BASF’s global Battery Recycling Circularity Challenge by demonstrating his lithium-ion battery recycling technology. Under Melsert’s leadership, ABTC was awarded a grant from the U.S. Department of Energy and the United States Advanced Battery Consortium LLC in partnership with USCAR (the collaborative technology company of Ford Motor Company, General Motors, and Stellantis).

Terrill Haigler, known as “Ya Fav Trashman" has been honored with the Waste360 Changemaker Award, which recognizes leaders who are creating real, meaningful, positive change for the waste, recycling and organics industry. Haigler is the first sanitation worker Instagram celebrity who has brought attention and recognition to the importance of sanitation workers as essential service providers. He worked to secure PPE for the sanitation workers of Philadelphia during the beginning of COVID when the city could not find enough to properly protect the sanitation workers.

Stay tuned as Waste360 will publish a series of in-depth conversations highlighting the winners’ lives and careers. You will be in awe of the work they are doing and will be proud to see that the future is bright with this class of young leaders.

Meet the winners in this gallery of the 2022 Waste360 40 Under 40 award recipients. Congratulations!