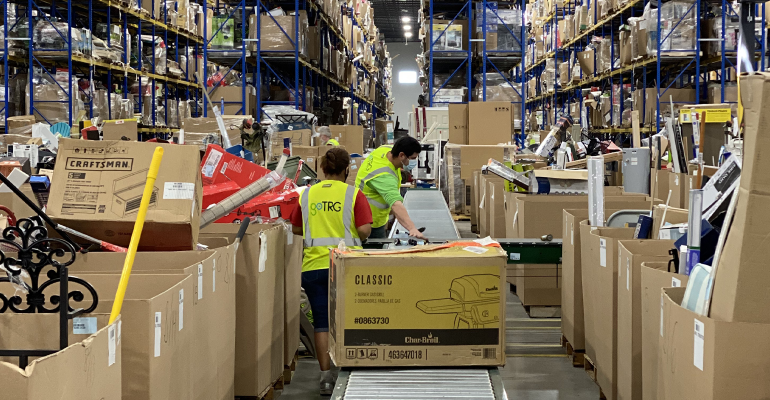 Each year about five billion pounds of returned merchandise ends up landfilled, according to goTRG’s data.

The Miami, Fla-based organization is among businesses working to keep these materials in circulation. It recovers and manages returns, distressed inventory, and overstock. And it processes these materials to prepare them for resale (and occasionally for first-time sales).

Merchandise is placed in one of two buckets: bucket one is perfectly working products; the second one is products that are used, damaged, or have missing parts that typically get refurbished.

“We have artificial intelligence technology that lets us make the best decisions on behalf of retailers, based on resell value, cost to repair, and cost of fulfilling items. Our goal is to add value while contributing to a sustainable planet,” says David Malka, chief sales officer goTRG.

With 12 facilities across North America, its clients are recyclers, large retail chains including Walmart, Sam’s Club, Home Depot, Target, and Lowes, as well as a few manufacturers.   The company also works with charities and education systems, sending products to them as donations. Collectively they have diverted 20-plus million pounds from landfill since 2015, with goTRG landfilling less than 1% of what it takes in, Malka says.

The company sorts damaged and nondamaged merchandise after confirming if it’s working. When products are damaged, workers determine if they are worth repairing or selling as is on secondary markets.

goTRG’s artificial intelligence technology scans items’ UPC, providing capability to search online at outlets such as eBay, Amazon, and Walmart for resale value. The system determines cost to sell online and to deliver to customers, taking the average shipping rate for that item using its dimensions. Ultimately a decision is made to sell to individual consumers, wholesalers, businesses, or local flea marketers. Or goods may be exported.

Another capability is to inform on what to do with returns. One major home improvement retailer uses the software themselves for this purpose. Associates scan returns and are prompted to place them on a given pallet, whether pallets destined to go to vendors or for donation. This enables them to disposition the items closer to the point of returns to minimize costs, instead of waiting until the products arrive at goTRG and disposition them then.

The company has been busy because retailers often do not want to dedicate time and resources to deal with what comes back to them. goTRG provides them an alternative to what has often become a common path for them: selling to liquidators. The problem says Malka is liquidators are not typically set up to refurbish or recycle; he says they throw out half of what they receive.

For retailers to take on returns themselves they would have to move them a few times to find a home for them. Returned online purchases would go to their stores or to return centers; at return centers they have to sort, consolidate, and sell as is.

[But] if they use goTRG’s technology they basically just get it to us and we control the best outcome for the product, eliminating unnecessary touches or freight. And we reuse everything that can be reused,” Malka says.

Electronics are the largest and toughest category. Each unit must be opened; the data is wiped, and goTRG tests the components.

“So, it’s a complex process. But with shoes for example, it’s more straightforward. We simply ask, is there value to be retrieved in fixing them, perhaps replacing laces, or should they be sold as is,” Malka says.

The company, which is R2 certified and works with R2-certified partners, uses electronic parts in other units. Items move on to recyclers if the hard drive has to be destroyed, and materials like plastic are extrapolated. Even foam is melted into cubes and sold to packaging companies to make new foam.

But there are few service models like goTRG’s and meanwhile, stockpiling returns, especially electronics, are contributing to a massive waste problem.

About 20,000 new digital devices are introduced each year, and most of them cannot be repaired, according to Gay Gordon-Byrne, executive director of Repair.org. The organization is working on standards to see that goods that are damaged out at retailers or manufacturers, especially electronics, get to consumers in usable condition. Manufacturers make this job hard, according to Gordon-Byrne.

“They are not selling diagnostics and parts, and many use proprietary screws or have proprietary components, so there are limits as to what can be turned into sellable used products.

So [if merchandise is damaged] it often becomes unrepairable by default. If you can’t fix a product you have to toss it, and this can happen before the warranty clock starts or at the retail location,” she says.

Changes are around the bend, she anticipates. So far 27 states are working on legislation to establish requirements of manufacturers whereby it would become easier to repair or refurbish basically anything with a chip.

goTRG is not as challenged to access what it needs to do repairs because of its relationships and volume that it processes. But it is working with repair.org (whose official name is Digital Right to Repair Coalition) to help develop refurbishing condition standards for used equipment so it’s easier for others to bring merchandise back to the market.

“We want to support [mitigation of] unnecessary landfilling just because [retailers] can’t get access to the parts they need,” says Fara Alexander, director of Brand Marketing and Communications, goTRG.

Meanwhile, goTRG is expanding its model, including with a program to empower retailers. It refurbishes their returns, and the retailers sell them themselves as certified refurbished.

“I see us doing more refurbishing where merchandise is sold by retailers. We’ve been approached by other retailers who are interested in this option. Some of them seem to like capturing that second sale,” Malka says.

The company is also trying to capture merchandise returned in its original packaging.

“We can sell brand new if we have authorization from the manufacturer and confirm nothing is wrong with the merchandise and it was not previously opened. When we have this option, we weigh it or sometimes open and reseal the box to be sure the customer is getting what they think they are,” Malka says.

Returns is a growing problem, and it has spiked because of ecommerce. Online returns are 10 times more than store returns. And this trend is not going to go away, according to Malka.

“Previously there wasn’t much pressure on the retailer or manufacturer to handle returns in the most sustainable and economical way, nor were scaled resources available to help them,” he says.

“Because returns have grown to monstrous numbers … these retailers and manufacturers have to partner with a returns management solution provider, but also make sure that this partner uses the most innovative tools to help them make the best decision and prevent merchandise from going into landfills and instead [see that they get] back in the hands of consumers.”