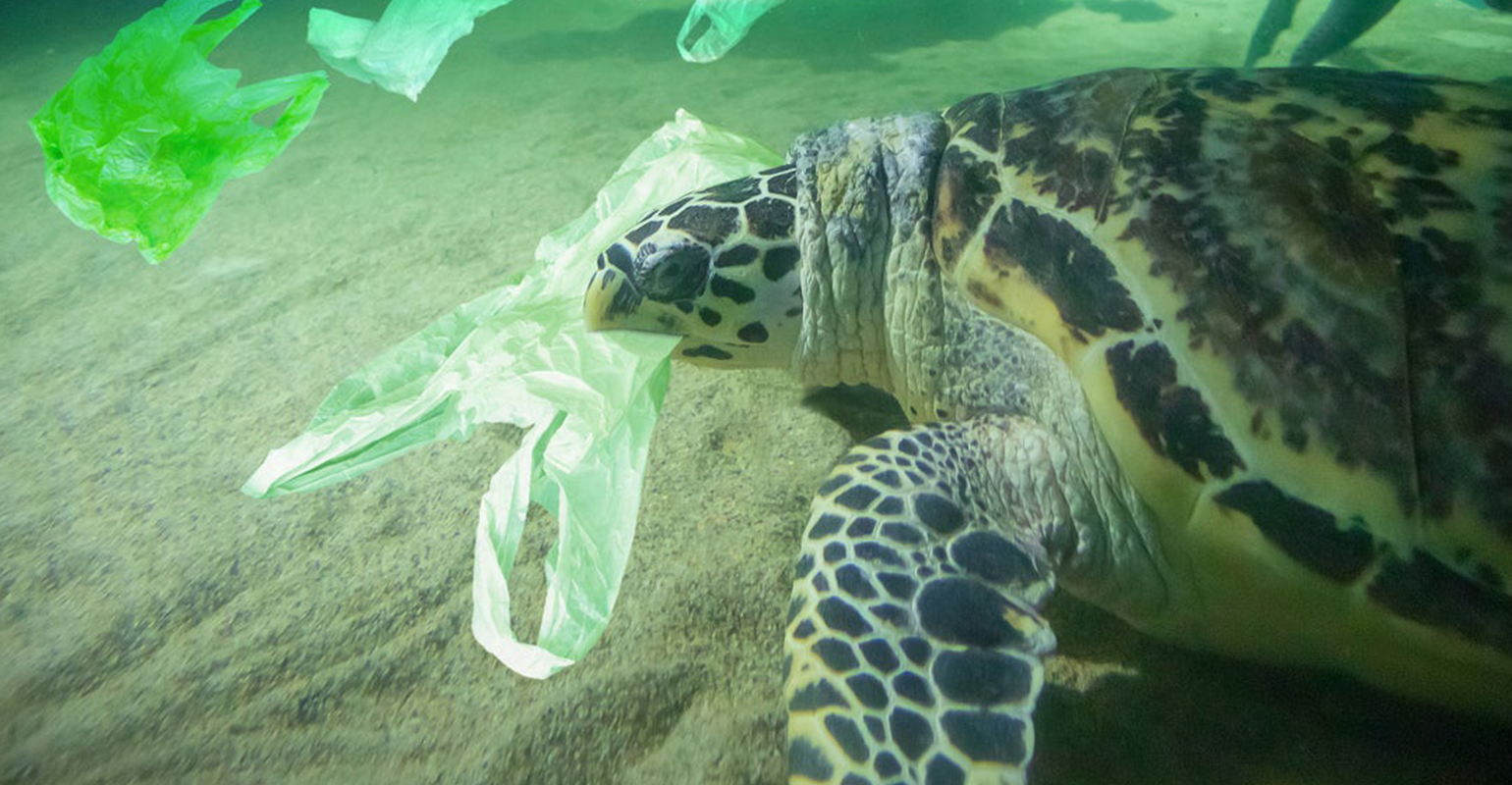 The practice of wearing face masks in public has been the norm around the globe for over a year. Worldwide that adds up to usage of roughly 129 billion face masks and 65 billion gloves every month, estimates the Centre for Environmental and Marine Studies at the University of Aviero in Portugal. Most are disposable and, some of it, like other single-use plastics, obviously ends up as litter in the environment.

Global nonprofit Ocean Conservancy is trying to quantify how much personal protective equipment (PPE)—masks, gloves and sanitizers—are adding to ocean and ocean-bound trash, and released a report with figures, though believes its findings are a vast underestimate. The numbers came from the organization’s last International Coastal Cleanup, which drew 80% less volunteers due to COVID-19.

It’s a beginning, and Nicholas Mallos, senior director of Ocean Conservancy’s Trash Free Seas program, shares the early data; plans for follow up; and why the organization is watching this waste type closely.

Here are some key findings from Ocean Conservancy’s latest International Coastal Cleanup, held the second half of 2020, as well as data from a follow up survey:

Also of note: 30% of the cleanup volunteers did not record PPE data since it was not added into the app as a category until after some of the cleanups had happened, further suggesting the figures do not come near reflecting the magnitude of the problem Mallos believes.

Ocean Conservancy will produce more numbers during its upcoming cleanup in September 2021 to get a larger global snapshot.

“We expect about a million volunteers and based on what we saw from a small sample last year we expect to see PPE as a prominent form of pollution. It’s likely to be in the top 10 or even top five debris types found in our International Coastal Cleanup,” he says.

Environmentalists and others paying attention to plastic waste, particularly in oceans, have a few concerns. Top is that disposable PPE is made from several plastic polymers, which tend to break down into microplastics, known to be problematic.

“We know plastic microfiber and microplastics are the most abundant form of ocean pollution and that very small plastic and fiber pieces can be ingested by the marine food chain. For instance elastic bands in face masks shed about 173,000 individual microfibers.

Not only do these small plastic pieces pose risk to marine life, but there’s concern about the transfer of microplastic to humans through the marine food chain,” Mallos says.

Then there are wastewater infrastructure concerns brought to light by some local, domestic governments and voiced internationally by authorities who correlate sewer system blockages and overflows with noticeably higher volumes of disposable wipes.

According to Mallos, data suggests there will be an increase in PPE in waterways over the coming year and an estimated 20% increase year over year. This is based largely on a trend whereby even before the pandemic more people were wearing PPE daily. He surmises the trend will continue as extra precautionary measures.

“We will likely see a decrease in the use of PPE, but it’s not going away. And we’ve seen that even where good waste management systems exist plastic waste finds its way onto beaches and into oceans, and PPE is no different.

“We need adequate infrastructure to ensure ways for anyone anywhere to properly dispose it.”

Volusia County, FL coordinates International Coastal Cleanup events at its beaches, though this year the effort was scaled down significantly due to COVID-19.

The county has about 36 miles of shoreline, all beach property.

“We are a coastal community that borders the Atlantic Ocean and St. Johns River. And we are finding increased volumes of PPE waste in these waterbodies,” says Jennifer Winters, County of Volusia Protected Species activity manager.

In general, she says, the region is seeing a lot more PPE, particularly masks, along beaches, parking lots, and roadways, all that connect to water bodies.

“I recently went out on a marine mammal stranding response and saw a used plastic glove floating in the water in front of this hurt manatee. It’s alarming to see an animal already in distress; then when you see plastic trash floating around him it’s an additional blow to circumstances,” Winters says.

The county is encouraging reusable PPE through outreach programs such as Adopt a Beach and is getting the word out at other special events.

Volusia also has an environmental center with marine life-theme educational programs, and lately works PPE into its messaging.

But the programs are done less in person now.

“We’re doing virtual classes, so we still get the message out, but it’s not as direct as being in the field,” she says.

What does Winters see as the greatest challenge? The overwhelming amount of PPE needed this past year and reaching people about how to properly manage these short-lived materials, which exacerbate a pre-existing problem.

“It took us off guard. There was no forethought to how to protect people from COVID while being responsible as far as waste management. Now we are trying to minimize use of gloves and other PPE to when we know it to be necessary. And we are encouraging people to wear reusables when possible.”

Nonprofit Alliance for the Great Lakes does community engagement in the Midwest and New York and leads waterway cleanups in those regions.

Tyrone Dobson, the Alliance’s senior volunteer engagement manager, says it’s early to assess the presence of PPE, but is anticipating it will just add to trash they’ve been seeing for years.

“We see a lot of cigarette butts, food wrappers, and other single-use plastics litter on the beach. And I see habits continuing,” Dobson says.

The season just began in late March and the Alliance is ramping up after a slower year last year.

“I anticipate people will make their way back to the beaches this year. Our volunteers supplement cleanup efforts of Parks and Recreation departments – and our support will definitely be needed with PPE litter.”

The Alliance collects data around waste that it shares with researchers, and Dobson is curious to see what comes from this dive into PPE.

“It will be interesting to see how this new data type will impact future studies on the environment. I look forward to seeing what trends Ocean Conservancy finds and how they compare to findings of other studies, and I’m happy that the data we collect will help further environmental research studies in the future.”

Ocean Conservancy’s report includes recommendations for governments and industry. Among them are:

For government to provide “robust” funding to ensure that “all relevant agencies,” including the U.S. Environmental Protection Agency and National Oceanic and Atmospheric Administration, have resources to help address waste management challenges and cleanup needs associated with PPE.

For businesses and or governments the report recommends to:

Mallos adds this advice for individuals:

“When possible, make sure to dispose of your PPE at home or in secure containers, and snip the loops off ear masks to lessen entanglement threats to marine life. You can also help clean up PPE in your neighborhood and record your findings on Ocean Conservancy’s Clean Swell app.”  [free download at Apple app store and Google Play for Androids]

But ultimately, he calls on governments and the private sector to “take strong action.”

“There are solutions that state and local governments can adopt. State level policies that phase out single-use plastics, particularly those that frequently appear as litter on beaches and waterways (including plastic bags, foam food and beverage containers, and straws), can go a long way in reducing the strain on our waste management and recycling systems,” Mallos says.  He goes on to advocate for Extended Producer Responsibility legislation, which is intended to hold manufacturers responsible for addressing waste from their products and packages, and to subsidize local recycling and waste management programs.

“The pandemic has laid bare our reliance on single-use plastics and how our waste management systems are struggling to keep up.  PPE serves as a visible microcosm representing our long-time problems with plastic pollution.”