Waste is a Design Flaw: How Designers Can Help NYC Become a Zero Waste City 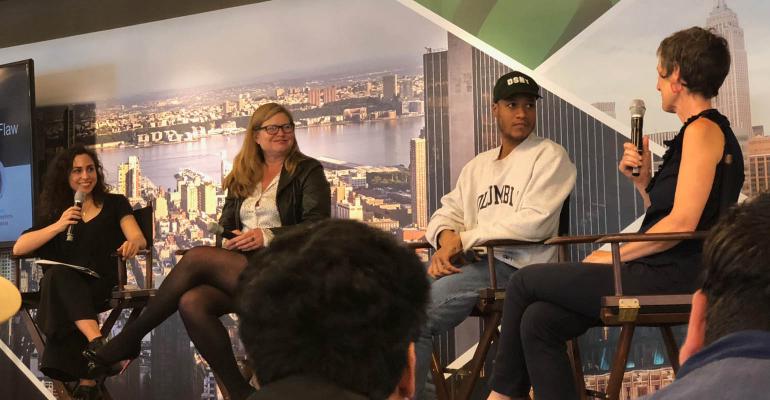 At a NYCxDESIGN event, a panel discussed creative solutions for reducing waste and designing with end of life in mind.

At a NYCxDESIGN event yesterday, Kathryn Garcia, commissioner of the New York City Department of Sanitation (DSNY), Heron Preston, well-known designer and designer in residence for DSNY, Clare Miflin, architect and member of the American Institute of Architects New York Chapter (AIANY), and Jessica Lax, director of competitions for the Van Alen Institute, discussed the role that designers play in New York City’s waste ecosystem and highlighted some creative solutions for reducing waste and designing with end of life in mind.

“At DSNY, we are always looking to connect with folks in the beginning stages when they’re thinking about building spaces and designing products,” says Garcia. “Often, designers are thinking about what’s easiest for the client or consumer, but we want them to begin thinking about the end of life for products and buildings during the early stages of the design process so that waste is included in that thought process.”

When buildings were first being developed in New York years ago, many department stores had their own individual incinerators in them, according to Garcia. But now, the waste and recycling materials from those department stores are being transported out of the stores and into facilities and landfills across the nation so waste is often out of sight, out of mind.

“Historically, it has always been about making waste disappear because people don’t want it back,” comments Garcia. “People are used to dropping their trash at the curb and not thinking about it again … but we used to save up scraps to make unique, trendy patches to repair our clothing. Now, it’s almost always cheaper to buy something new than it is to repair something. It’s our duty to help people once again see the value of creating something new out of what people are throwing away and encourage people to think about what they are throwing away and if there’s another option other than discard.”

One of the designers making a statement about the problem of waste in the world and in the design industry is Preston, who previously worked with musician Kanye West and turned used DSNY uniforms into fashionable outfits for New York Fashion Week in 2016.

Preston began designing with waste and end of life in mind when a friend came to him with the idea of applying his design innovation to a “wicked issue.” That wicked issue just so happened to be waste, and after seeing a massive amount of pollution in waters while traveling, Preston decided to hit the ground running with his friend’s idea.

Preston, who has always been inspired by workwear and uniformed, reached out to DSNY a couple years ago with his idea of using second-hand uniforms to create t-shirts and bags. DSNY loved the idea, and together, they designed creative and unique accessories and clothing items.

“We can protest and fight about a number of issues, but when it comes to the environment, people feel like it’s challenging and don’t always know how to approach the subject,” comments Preston. “Everyone thinks H&M is the most sustainable retailer because they market it the most and talk about it the most, but it’s really brands like Eileen Fisher that are leading the way. It all comes down to communication, and getting all retailers, vendors, factories, etc. involved. There are so many moving parts, and there is no one way to make a brand sustainable, so we need to look at the lifecycle of products and what options are out there to make a large impact.”

When it comes to designing buildings, the panelists agreed that waste needs to be part of the design process. Residential and commercial buildings need to have designated places for waste and recycling materials, and to help designers and architects craft those spaces, Miflin helped initiate and lead the development of the AIANY Zero Waste Design Guidelines. The guidelines address the crucial role the design of buildings and cities play in achieving circular material and economy loops.

“Right now, one of the biggest issues is figuring out how to design buildings for organics,” states Miflin. “We have been able to use chutes for waste and recycling, but those just won’t work for organics. Organics make up about 34 percent of the waste stream in the city, and we need to design our buildings to make organic waste easier to manage for both residents and businesses.

To get designers and architects thinking about designing with waste in mind, Miflin and others are teaching those in the architecture and design field about the AIANY Zero Waste Design Guidelines and inviting them to utilize an online calculator to figure out how much waste is in their architectural project.

“New York City has a goal of achieving zero waste by 2030, and in order to reach that goal, we need to work with every industry to reduce waste where possible,” says Garcia.

Before the event ended, Garcia announced a new design competition for DSNY’s corner litter baskets. The litter baskets, which have had the same design since the 1930s, have some challenges. They are heavy for sanitation workers to lift, especially when filled with waste, they allow liquids to easily spill out and they make waste easily accessible to vermin.

“There are about 23,000 litter baskets in New York City, and we are looking forward to seeing what innovative and creative designers people can come up with to improve the design and durability of these baskets,” comments Garcia.

More information about the design competition will be announced soon.