To many of us, the annual conferences that had long been held by the National Recycling Coalition (NRC) of old soon began to run together in our memories. But, for me, 19 years later, one will always stand out.

That was the conference that the NRC held in Pittsburgh in 1996.

Back then, the internet, the same place on which you’re reading this article, had barely broken into use. Netscape’s user-friendly browser had appeared just the year before, but it still took 30 seconds to load one page via dial up. There was no broadband in common use, let alone Google, Twitter, Facebook, YouTube, Digg, Huffington Post or Gawker. Indeed, people still read newspapers and magazines on an ancient artifact called paper, a close relative of papyrus, which had been the mainstay of curbside recycling programs back in the day.

Back there in Pittsburgh, where the NRC was holding its annual conference, a small conclave of the new generation of then-youthful recyclers held a meeting of their own in a side room to meet a visitor from New Zealand. They had largely come of age in the counterculture ‘60s, and then, through the ‘80s and early ‘90s, gravitated to recycling as a practical way to actualize their dreams. Together they listened in rapt attention as Warren Snow recounted the story of the new but growing movement to zero waste on the last settled Pacific Island nation.

Because the post-Earth Day/post-Mobro garbage barge generation of recyclers were idea people fixated on a sustainable world, and were not, per se, businessmen, they weren’t wedded to protection of any particular company’s fortunes. For, to focus on overall sustainability meant recognizing that recovery and reuse of some discards, as was being done, only touched the tip of the iceberg.

Ignored was the fact that upwards of 90 percent of the discards (and use of energy) occurred in extraction and manufacture—the upstream of the products—only some of which got recycled. It was a process that was further complicated and confounded by poor designs.

Snow’s new idea of zero waste struck at the heart of recycling’s limitations. Its grand goal was guide people and companies in changing their lifestyles and operational practices to imitate sustainable natural cycles, where all discarded materials are designed to become resources for others to use. This meant designing and managing products and processes to systematically avoid and eliminate the volume and toxicity of waste and materials, conserve and recover all resources, and not burn or bury them.

Next, the U.S. zero waste movement soon joined hands with like-minded activists of their generation around the world to form a global zero waste organization in 2002 called the Zero Waste International Alliance (ZWIA).

True, zero waste did, at first, sound cosmic in its conceit. However, the underlying power of its message quickly came to be seen in the number of national brand companies coopting (and, yes, sometimes distorting) the phrase in their sustainability advertisements.

Most recently, ZWIA has upended traditional concepts about the storied Integrated Waste Management Hierarchy that the Environmental Protection Agency (EPA) had published just before that NRC Pittsburgh conference. Years before that, as the Mobro barge raised questions about landfill capacity. In 1989 the EPA issued an Agenda for Action that first included the idea of an Integrated Waste Management Hierarchy, which took on many variations before reaching the common one today. 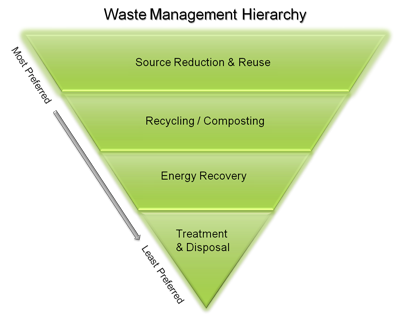 The EPA’s basic idea was to attempt to suggest–but not mandate–that, even though landfilling was most common in the marketplace because it appeared cheapest, other options to handle discarded materials were preferable. These included source reduction, recycling and composting, and even waste-to-energy.

ZWIA has taken that thought further to fully reflect principles of sustainability. 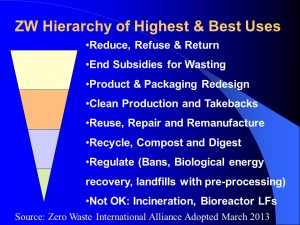 No longer is deference given to the fact that heavily subsidized market prices favor landfilling. Now the only discards to be acceptable in landfills are non-recyclable inert material, which follows the model of the 1999 European Commission Landfill Policy, and reuse, repairs and redesigns are given much more prominent roles.

Will landfills become to be seen as obsolete today as newspapers?

I don’t pretend to know. But, I plan to enjoy watching the show to find out. Nothing less could make me happier.

Peter Anderson is president of RecycleWorlds Consulting, executive director of the Center for a Competitive Waste Industry, and project director for the multi-state Plastic Redesign Project.