Vanguard Renewables and Partners Tap into Dairy Biogas for RNG 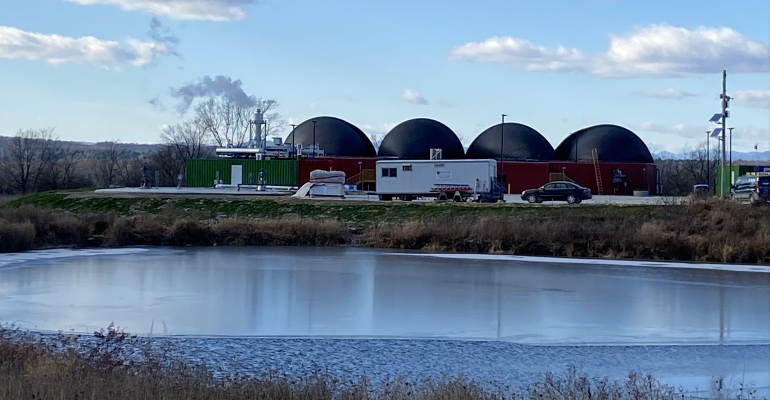 As the renewable natural gas (RNG) market evolves, there’s been an uptick in two project types: one is RNG produced from dairy farm manure; another is RNG from manure that’s co-digested with food waste. RNG project developer Vanguard Renewables is investing in both market options, with six anaerobic digester (AD) projects under construction at farms in Colorado, Georgia, and Nevada, to make either electricity, heat, or transportation fuel. And it’s growing its network to pump up its feedstock supply while helping farmers cut greenhouse gas emissions.

The co-digested material is converted to RNG for electricity and heat. The higher-dollar, manure-only projects make output that goes to California for transportation fuel.

Vanguard has buy-in from Richmond, VA-based utility, Dominion Energy, who will sell this renewable product around the country. Additionally, 72 farms in 11 U.S. states have come on board who see these ventures as a way to not only cut emissions, but better manage massive tons of cow manure while increasing their income, says John Hanselman, chairman and CEO of Vanguard Renewables.

Vanguard is reaching the agriculture sector through an alliance with Dairy Farmers of America (DFA), which is the largest dairy co-op in the U.S. with 8,000 family farms as members.

“Farms all over the U.S. are looking to convert manure into RNG. In the next 36 months we will have food waste co-digestion systems in each of the top 25 metro areas of the U.S.,” Hanselman says.

To scale further, Vanguard just launched an alliance with foodservice industry partners to capture food waste and feed what can’t be eliminated into the farm-based ADs.

In the North East most of the RNG is used for thermal energy to make electricity or for heating and cooling buildings.

RNG from the manure-only projects all goes to California, which is looking at this lower-carbon alternative as it scrutinizes emitters of greenhouse gases, including animal waste.

Manure-only and co-digestion projects each have their place in the market because the resulting products from each have very different price points.

Vanguard says it can make food waste biogas at half to one-third the cost of biogas from manure only. This cheaper renewable is catching on among buyers who have made a voluntary commitment to break away from fossil fuel. Those who pursue the higher-dollar product do it to meet regulatory obligations.  There are pluses and drawbacks with either type of project.

Manure is faster to collect and process than food waste. But it contains less energy since the cow has already digested the food, so these projects must be fairly large-scale to pencil out. To put energy value in perspective, food waste has two to five times the gas potential based on chemistry analyses, according to Hanselman.

But once food is added to the equation the operations are more involved.

“Farmers already collect manure, and we just process it through anaerobic digesters. But with food waste we have to create relationships with waste haulers, food manufactures, hospitals, colleges, and universities. We have to collect it and get it to the farm, which is much more cumbersome,” Hanselman says.

DFA markets milk from thousands of dairy farms across the U.S. and also provides financial and other support to farmers. As part of that service, it is involved in AD.

“It’s a relatively new opportunity for farmers, and we help them get access to quality information and trusted partners,” says David Darr, senior vice president and chief Strategy and Sustainability officer for Dairy Farmers of America.

Until just a few years ago, dairy farmers wanting to set up an AD had to finance, build, and operate it themselves.

“Vanguard provided a paradigm shift in this space where they were willing to invest in, own, and operate anaerobic digesters on dairy farms. DFA has worked with Vanguard for five years and now has the most active pipeline for these projects it’s ever seen, nationwide and across a range of farm sizes,” Darr attests.

Dairy farms do not have compliance requirements for methane emissions but still look to reduce their environmental footprint, and some see AD systems as a worthwhile investment to get there.

“We would rather have the market drive adoption and interest than have policy or regulation be the drivers… We are excited and optimistic that hundreds of dairy farmers will be able to participate in programs like this to further reduce their environmental footprint and increase diversity and their revenue streams,” Darr says.

Dominion Energy is partnering with Vanguard to develop a nationwide network of dairy RNG projects – a partnership worth about $200 million.

In this venture, Vanguard will design, develop, and operate the ADs while Dominion will own the projects and market to consumers, including other public utilities, among other commercial and industrial customers such as colleges, universities, and transportation companies.

For Dominion Energy, like DFA, RNG has been a vehicle to sustainability. The utility’s ultimate goal is net-zero carbon and methane emissions across its natural gas and electric operations by 2050.

“Few technologies are capable of doing so much good, so broadly across the economy. It provides clean energy for consumers, reduces farm emissions for the climate, and gives an economic boost to family farmers,” says Ryan Childress, Dominion Energy’s director of Gas Business Development.

Childress points to strategic partnerships as crucial for success, especially with new technology.

“Vanguard is the ideal partner because of their expertise with anaerobic digestion in the dairy sector and their strong relationship with the Dairy Farmers of America. Thanks to Vanguard’s pioneering leadership, we’re now able to develop dairy renewable natural gas projects for the first time on a nationwide scale,” he says.