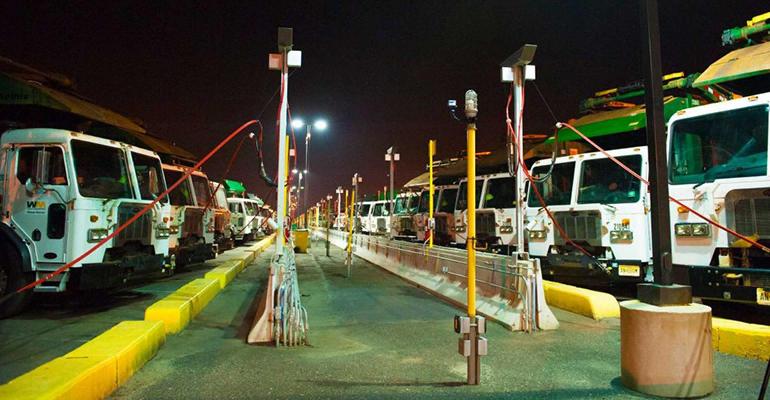 Ventures to make transportation fuel from biogas are attracting big investment dollars while creating tens of thousands of jobs, and these renewable natural gas projects (RNG) keep rolling out. In the past year the industry developed more RNG facilities than during its first 30 years (between 1982 and 2011). Though it has a long way to go to enjoy a robust market share, and it faces barriers along the way.

A bulk of the output goes to California, incentivized by the state’s low-carbon fuel standard (LCFS), which is driving more projects across the country than the U.S. Environmental Protection Agency’s Renewable Fuel Standard program, according to Patrick Serfass, executive director of the American Biogas Council.

Today, the LCFS pays $200 per metric ton of carbon dioxide reduced, a rate that’s been fairly stable, at least for the past couple of years.

Still, there are barriers, namely high costs as a result of clean up requirements and demand for other uses of RNG such as for power.  How competitive this product is for transportation depends largely on incentives, attests Rosa D. Faus, a researcher at the Institute of Transportation Studies at UC Davis.

Faus goes on to say “RNG for transportation fuel provides great opportunity if developers can make it work economically, but these fuels often constitute a small drop in the bucket compared to the large energy demand in transportation. There are some great niche applications (such as to fuel refuse trucks in solid waste operating facilities) but it is unlikely that RNG will become a mainstream fuel.”

Johannes Escudero, CEO, Coalition for Renewable Natural Gas, says there is RNG potential to replace between 13 and 20% of current conventional natural gas consumption (for heating, cooking, and transportation combined).

While the activity is mainly in California, only two of the now operational gas injection projects are actually housed there for reasons that come down to policy and money.

“For some reason, interconnection costs in California are 10 times higher than anywhere else in North America, which presents a huge barrier in California. Those high costs are stunting market growth in that state. So, projects are injecting into pipelines all around the country and transporting it to California, which counts against the carbon score since distribution generates some emissions,” says Serfass.

The other hurdle is meeting stringent gas specs, which adds expense associated with buying and operating equipment. California’s tight restrictions on CO2 content of gas can add millions of dollars to a project.

Another challenge in California is 75% of natural gas vehicles are already fueled by RNG.

“We need more RNG vehicles there and across the country. At some point RNG supply will exceed demand from the transportation sector unless more of them are deployed,” says Escudero.

“You have to look geographically to consider demand, amount of resources, cost of conversion, access to grid, and cost of pipeline to take to another location if you can’t use it on site.  These things are location specific that influence how people invest,” she says.

In the past nine years, the Coalition for Renewable Natural Gas has made some headway in bringing policy change at federal, state, and provincial levels.

“When we began in 2011 almost all RNG was used to make electricity.  Now more than 80 percent is used as transportation fuel due to market demand created largely by the Renewable Fuel Standard and state policies,” says Escudero.

At the state level, in addition to California's  LCFS, Oregon's Clean Fuels Program creates direct financial incentives for the production and use of low- and negative-carbon biofuels, including RNG, though the Oregon market is small. Other states are exploring and/or pursuing similar programs, including New York, Washington State, and Colorado with Washington and New York’s efforts more developed.

With help from carbon credits, RNG sourced from dairy and swine manure are gaining momentum. These projects provide opportunity not only to reduce vehicle emissions, but to reduce farm emissions, largely through modernizing manure management practices.

When considering carbon reductions from both vehicles and farm processes, the project can actually be carbon negative, based on life cycle analyses approved by the California Air Resources Board.

Around the country, biogas project developers are looking for mostly dairy and swine farm partners that have open manure lagoons, though some target poultry farms as well.  And the most lucrative projects target the larger farms with the highest emissions because they are where you have opportunity to have greater impact, says Serfass.

For now, transportation pricing for RNG continues to be in flux to a degree, and with that flux comes uncertainty. What the next administration will bring is still not fully clear.

The Trump administration gave a lot of exemptions to small refineries that undercut the market after demand has been set, which threatens investments already made in projects under construction, say industry stakeholders. Though President-Elect Joe Biden has expressed great interest in advancing renewable energy.

Representatives from The Coalition for Renewable Natural Gas  met with Biden’s Biofuels team but Escudero is guarded in commenting on what the future holds, stating only, that “We met to provide a primer on RNG, and the role that the federal RFS has played in the growth of our industry, but we do not know who Biden would appoint to lead EPA if his election victory is certified.”

Matt Tomich, president of Energy Vision believes the new administration may pursue a national low-carbon fuel standard or similar, as signaled by Mary Nichols at the California Air Resources Board.

“Nichols is thought to be a frontrunner for EPA administrator, but a lot may depend on the outcome of the Senate races in Georgia,” Tomich says.

As others have done, he points to the opportunity for fleets to reduce greenhouse gas emissions, up to 100% or more at an often reasonable price point. RNG could also address a steep organic waste problem.

But, Tomich says, “Our concern is that the scale of our petroleum reliance is immense, and that prescriptive policies—such as those prematurely promoting electrification only, and the elimination of the internal combustion engine—further delay the transition to clean alternatives and inhibit the growth of proven, scalable solutions like RNG that can displace significant volumes of diesel in the next decade plus.”