Energy Vision Awards Those Working to Ramp Up RNG Adoption 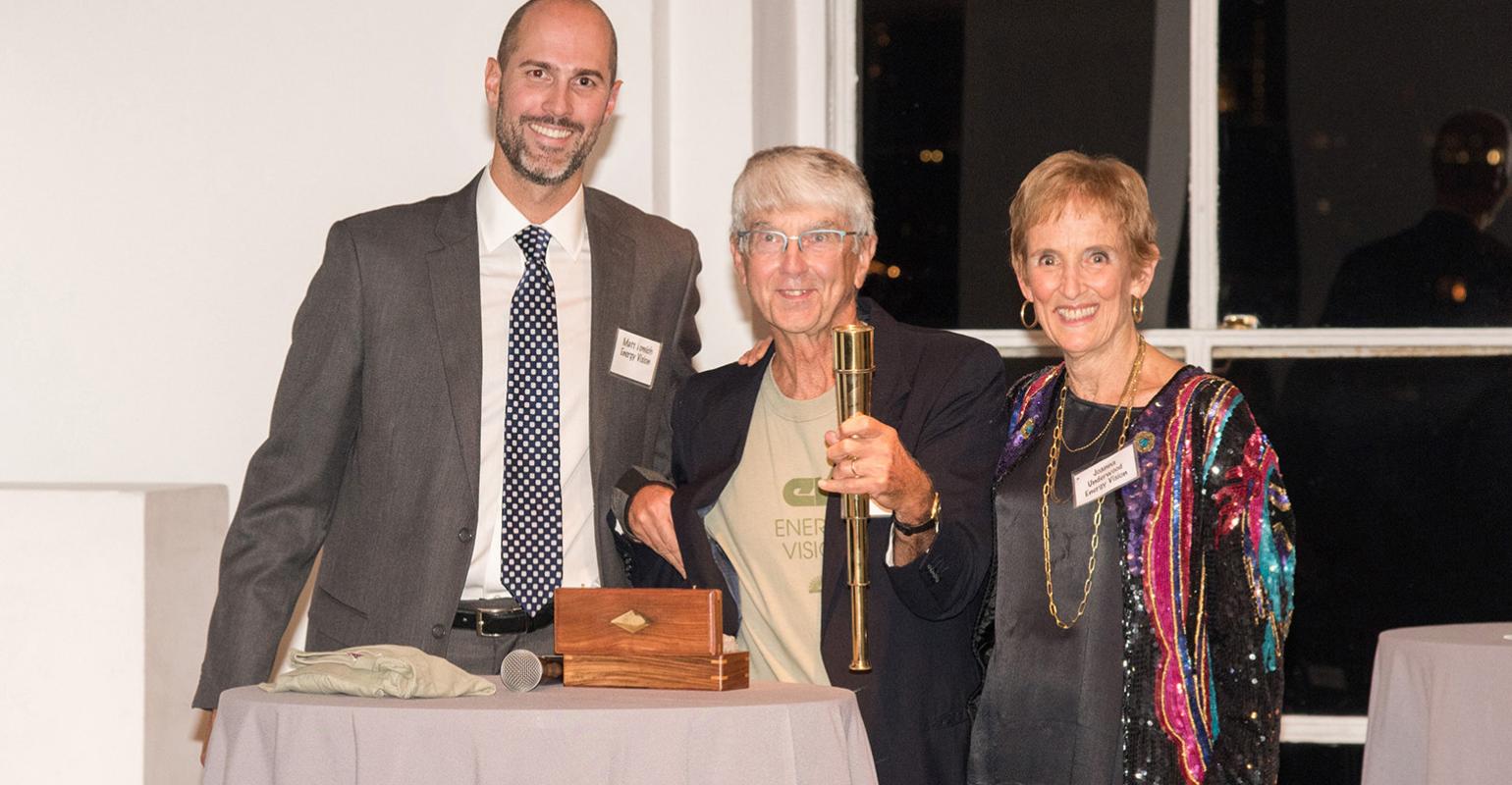 During its annual awards reception in Manhattan, N.Y., Energy Vision, a national nonprofit that researches and promotes sustainable low-carbon energy and transportation strategies, honored business and government leaders and health and alternative energy advocates whose work is helping ramp up adoption of renewable natural gas (RNG) made from organic waste. The 2018 Energy Vision awardees include:

RNG is made by capturing and refining methane biogases emitted as organic wastes (from communities, food processing and agricultural operations) decompose. Argonne National Labs and the California Air Resources Board have independently verified that over its lifecycle, RNG made from manure or food scraps processed in an anaerobic digester is a “net carbon-negative” transportation fuel. That’s because the greenhouse gases (GHGs) captured in producing RNG are greater than the GHGs emitted by the vehicles burning it.

At the same time, using RNG instead of diesel eliminates carbon-intensive emissions from heavy-duty vehicles. The bio-solids left in digester tanks after the gases are extracted can be used as high-quality compost and soil amendments, eliminating the need for chemical fertilizers.

A new Intergovernmental Panel on Climate Change (IPCC) report emphasizes the need for carbon-negative strategies that can remove carbon dioxide from the air to limit warming to 1.5 degrees Celsius.

“The new IPCC report finds we may have dire consequences by 2040 unless we make drastic changes quickly,” said Energy Vision Founder and Board Member Joanna Underwood as she introduced the awardees. “But the good news is, RNG is a carbon negative strategy ready to go now, and we are working to grow the waste-to-fuel industry. Over 30,000 U.S. buses and trucks are already running on RNG. Unfortunately, none of them are in New York City. One of our top priorities is our campaign to get New York City to stop running all its thousands of trucks and buses on diesel or biodiesel and adopt RNG.”

“Diesel exhaust is nasty stuff,” said Landrigan in a statement. “It’s a complex mix of gases and particulates, potent respiratory irritants and metabolic toxins. These include proven human carcinogens such as formaldehyde and soot. Exposure to diesel exhaust leads to more asthma, more respiratory tract infections, more missed school for children and more heart attacks and lung disease for adults. Recent studies have linked it to chronic kidney disease, diabetes and pre-term births for pregnant women. One new study posits an increased risk for Alzheimer’s disease. These chemicals waft through the urban air and make us all sick. The alternative New York City proposes is ‘cleaner diesel’ but that’s like proposing ‘safe asbestos’—there’s no such thing. There is no place in our environment with children and other living things for diesel. Getting rid of it in New York City is the right thing to do.”

Toronto, the fourth largest city in North America, could serve as a model. “The city of Toronto is setting the pace for a sustainable future on many fronts,” said Energy Vision President Matt Tomich in a statement. “In 2002, it began diverting residential organic waste from landfill through its Green Bin program and processing it through innovative pre-processing and anaerobic digestion technology. Next year, in partnership with Enbridge Gas Distribution, Toronto will begin producing renewable natural gas from Green Bin waste, which can be used to fuel the majority of its collection fleet."

The Kroger Co. is another model of sustainability including RNG adoption. Starting in 2016, RNG has fueled 40 tractor-trailers in Kroger’s Fred Meyer grocery chain, displacing half a million gallons of diesel annually—the first commercial truck fleet to adopt RNG in the Pacific Northwest.

“Zero Hunger | Zero Waste is our bold social impact plan to end hunger in our communities and eliminate waste in our company by 2025,” said Nick Cortolillo, senior director of manufacturing for Kroger, in a statement. “It’s only the first anniversary of Zero Hunger | Zero Waste, and our goal is to eliminate all waste across our more than 2,700 stores, 42 distribution sites and 36 manufacturing facilities, distribute edible food and find productive uses for the rest. In 2017, we donated 325 million meals and have established a goal to accelerate our donations to provide 3 billion meals by 2025.”

“For 30 years, we had a wastewater treatment plant at our manufacturing facility in Greensburg, Ind., but now we’ve replaced that system with an anaerobic digester that converts waste into electricity, covering 30 percent of our electrical need for the plant,” added Cortolillo. “We’re also getting our suppliers more involved, including the major supplier of our raw milk in Indiana. Their onsite digester produces renewable natural gas to fuel their fleet of 46 milk delivery trucks.”

Finally, Energy Futures’ Cannon was given a lifetime achievement award for conducting groundbreaking research into alternative fuels since the 1970s, including the seminal 1989 report Drive for Clean Air, the first independent report comprehensively analyzing alternatives to petroleum-based road fuel. Over the past four decades, Cannon has consulted for clients in 30 U.S. states and 20 countries.

“1971 was not a very good year, but it was a good opportunity,” said Cannon as he accepted the award. “Out of the pits of the Vietnam War came the largest body of environmental legislation ever hatched by any country at any time. It was a revolution in the environmental field, which we were a small part of. Maybe today is similar. Maybe there are young people out there who are idealistic and out of this difficult time can help ignite the next revolution and the next exciting step.”