This horse-drawn Road Grader, purchased by John Jennings several years ago, was used at one of the landfills in central Florida to grade the road leading into the landfill. It had been sitting there many years until they finally sold it to Jennings.

The Mack Dunn Coal Truck was ordered in 1927 by Dunn Coal and Oil of Federal Street in Chicago. It's said that the truck, which is unrestored, is the only original survivor. The truck was used to deliver coal during the winter months, bringing ash and rubbish back to the landfill after the coal was delivered. During the summertime, the truck was used to deliver cold mix asphalt for paving work. The truck was purchased by Waste Pro Chairman and CEO John Jennings in 2013, and it's the most expensive museum truck investment to date.

(Left to right) The 1946 Chevy Truck with a dump bed was used on a farm in Kansas up until a few years ago. Recently, it was used in movie "Fences." It has a wrap on the front of the truck with movie makeup, and it will eventually have a garage body mounted onto the chassis. Next to that is the 1949 International KB6 with a dump bed, the 1948 Dodge B-Series with a Garwood dump body, the 1959 Chevy Viking 50 with a dump body and the 1937 Ford Leach Refuse Getter.

The 1952 Chevy Leach Packmaster and 1946 Chevy Truck with a dump bed were used for the movie "Fences." They were original restored vehicles, but were aged for the purposes of filming.

The 1926 GMC Flatbed Truck is a representative of the collection truck that Michael Jennings worked on when he came over as a 17-year-old from Ireland in 1930.

The 1987 Mack RD685SX Leach 2RII 25 Yard Rear Loader has a Gold Mack Bull Dog on the hood, which indicates that the truck has an all-Mack powertrain.

One of the museum’s showpieces is a 1948 Dodge with an open Gar Wood Industries Inc. body that was once owned by John Jennings’ father, Michael Jennings. 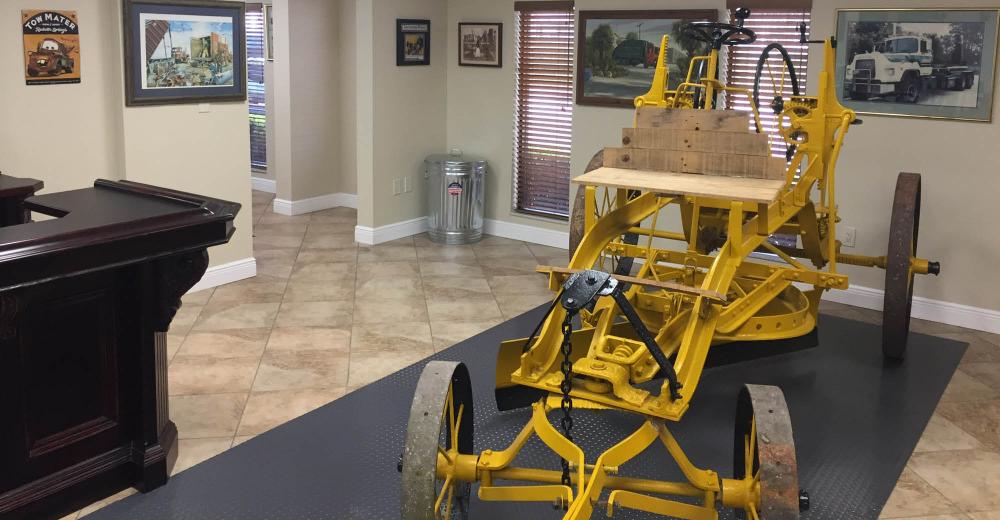