Behind the Wheel: A Look at Mack’s LR Electric Truck for DSNY 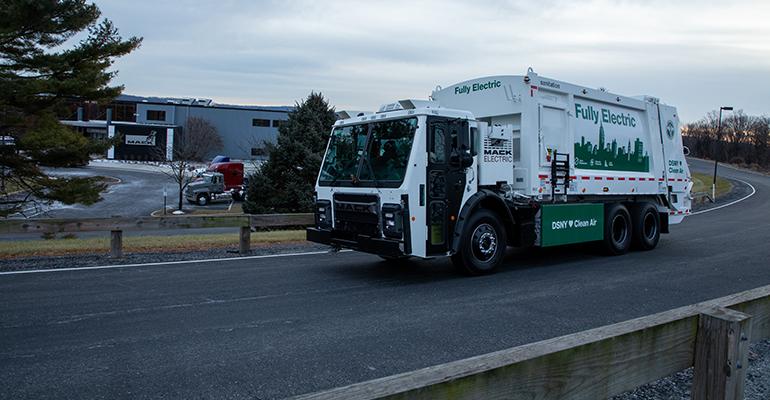 Start Slideshow ›
DSNY will begin real-world testing of the truck in Q2 2020 in Brooklyn, N.Y.

At a Mack LR Electric ride and drive event last week at Mack’s Customer Center in Allentown, Pa., journalists and City of New York Department of Sanitation (DSNY) officials put the Mack LR Electric model as well as a Mack diesel truck to the test on Mack’s test track and skid-pad, which simulated the real-world stop-and-go driving found in refuse applications. The truck, which is a fully electric version of the Mack LR refuse model, was first unveiled in May 2019 and will begin real-world testing in Q2 2020 in Brooklyn, N.Y.

“The Mack LR Electric demonstrates Mack’s leadership in powertrain innovation, bringing clean, quiet propulsion to the refuse application, which is one of the toughest in heavy-duty trucking due to the harsh operating environments and number of starts and stops during a shift,” said Jonathan Randall, Mack Trucks senior vice president, North American sales and marketing, in a statement. “As we begin Mack’s 120th anniversary this year, we look forward to testing our latest powertrain innovation with DSNY as they put the LR Electric through a rigorous test.”

DSNY is the world’s largest sanitation department, collecting more than 12,000 tons of refuse and recyclables each day throughout the city's five boroughs via 2,346 vehicles, 99 percent of which are Mack. The department has made the move to implement compressed natural gas, electric vehicles, biodiesal and dimethyl ether over the years, however the LR Electric will be the first battery electric refuse vehicle in its fleet.

“New York City has a goal to reduce our greenhouse gas emissions 80 percent by the year 2035. DSNY along with our more than 6,000 vehicles will play a major role as we push toward that goal,” said DSNY Deputy Commissioner Rocky DiRico in a statement. “We’re looking at all kinds of technologies to help us achieve that reduction. We’re especially proud to be the first Mack customer to test the LR Electric model.”

DSNY will base the Mack LR Electric demonstration model at its Brooklyn North 1 garage and test it on a local collection route. Several vehicle performance metrics will be evaluated by DSNY, including operating range, payload capacity, regenerative braking performance and the overall functionality of a fully electric refuse vehicle in its operations.

Although DSNY vehicles are also equipped to handle snowplow duty during winter months, this model won't be used for that additional duty initially. As the technology advances, the hope is that the battery technology will allow the truck to eventually be able to collect and plow as needed.

The Mack LR Electric is outfitted with a copper Bulldog hood ornament and powered by Mack’s integrated electric powertrain. It features two 130-kilowatt (kW) motors that deliver a combined 496 peak horsepower and 4,051 pound-foot of torque available from zero revolutions per minute. A two-speed Mack Powershift transmission harnesses that power and puts it to the ground through Mack’s proprietary S522R 52,000-pound rear axles. The truck features four NMC lithium-ion batteries (Lithium Nickel Manganese Cobalt Oxide) that are charged via a 50kW, SAE J1772-compliant charging system. All accessories on the Mack LR Electric model are electrically driven through 12-volt, 24-volt and 600-volt circuits.

While DSNY will test the first Mack LR Electric truck, a second vehicle will be tested by Republic Services in North Carolina later this year. Testing by DSNY is expected to take about a year, and more information about Republic Services' testing will be announced at a later date.

Flip through this gallery to view a selection of images from the ride and drive event.