Working as a production secretary during 2008 filming of the Coen Brothers’ “A Serious Man” in Minneapolis, Shannon Schaefer Bart saw numerous opportunities to make the production more sustainable. With the studio’s blessing, she was able to divert 11 tons of waste during the 10-week shoot. Soon after, Bart founded EcoSet Consulting, which helps commercial film productions minimize their environmental footprint.

“A typical three-day shoot in Los Angeles with 70 to 100 people can generate up 2,000 lbs. of waste,” says EcoSet Executive Director Kris Barberg in an email interview. “If set walls and construction elements are being discarded on a project, that total is much higher. We estimate that U.S.-based commercial productions generate more than 18 million lbs. of waste annually.”

Barberg says EcoSet functions as a production department solely focused on waste reduction: “When we’re engaged by advertiser, creative agency or production company, we pre-determine the environmental priorities and solutions for the project. Then during pre-production, our coordination team communicates with various members of the production to orchestrate the logistics of waste prevention and diversion and other practices like implementing solar and renewable energy.”

Once shooting begins there are one or two EcoSet staffers on set at all times, according to Barberg. Among other duties, they ensure proper handling of food and compostable waste, a huge part of a production’s waste stream.

Source reduction on set starts with using refillable steel water bottles instead of single-serve plastic bottles. Barberg says the company has prevented the use of 60,000 plastic water bottles during its three years in operation, plus whatever was avoided through the continued use of the steel bottles after each production wrapped.

“If floor protection is needed in a location, we recommend renting reusable rugs versus disposable fiber-based layout board,” says Barberg, identifying other source reduction opportunities. “EcoSet connects with the caterers and ask them to use washable cutlery and dishes for lunches instead of disposables. When disposables are used, we make sure they are plant-based and can be composted.” 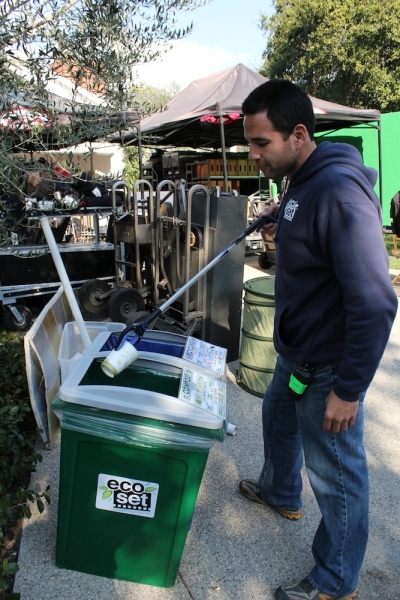 The firm also reaches out to waste services firms. “We partner with local haulers in the cities where we work, and EcoSet collects and sorts the materials on set based on what the specific hauler can recover,” says Barberg.

“Quite often on standard shoots, items like batteries, electronic waste, film scraps, paint and other hazardous chemicals are discarded because there is no time or infrastructure built in for proper disposal,” says Barberg. EcoSet does the legwork to ensure that these materials are diverted, averaging a diversion rate of 85 to 95 percent on shoots it oversees.

“The commercial production industry is slowly beginning to transition to better practices,” says Barberg. “We’re proud to be a leader in this movement.”

Learn some of the more unorthodox methods EcoSet uses to divert waste and unique items it has repurposed by reading the full-length interview with Kris Barberg, “Shooting for Zero."