HomeFleets & TechnologySafetyAs OSHA Issues Vaccine Mandate, the Waste Industry Continues to Battle Labor Shortage
Recent
Machinex Upgrades West County Resource Recovery in California
May 27, 2022
EREF Hosts Record-Breaking Charitable Auction, Proceeds Directly Support Scholarships and Scientific Research
May 27, 2022
This Week in Waste: Top Stories May 23 - May 28
May 27, 2022
Landfill Emissions Measurement: What We Know, What We Need to Know
May 27, 2022
POLL
SWANA & Oceans Caucus Foundation Host Congressional Briefing on Recycling
May 27, 2022
Collaboration Leads the Way in Connecticut to New Extended Producer Responsibility Law for Management of Discarded Residential Gas Cylinders
May 27, 2022
An Uber-Style Service for Curbside Recycling
May 26, 2022
S&B Selected as Contractor for New Hope Energy’s Advanced Plastics Recycling Unit
May 26, 2022
All COVID-19 News Related to the Industry
brought to you by 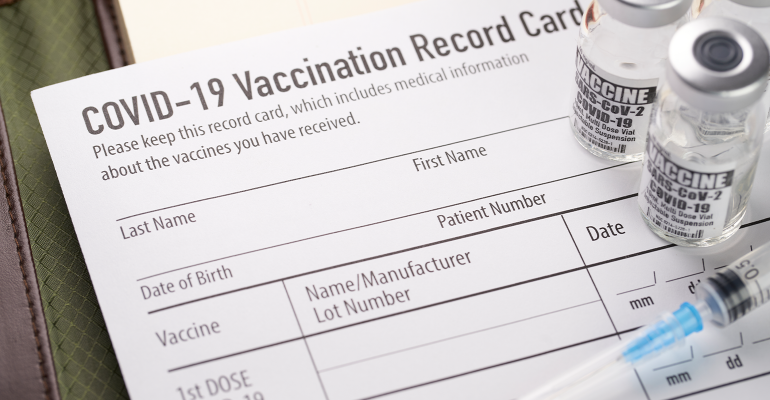 The new ETS, which goes into effect on November 5, requires employers with at least 100 workers to adopt a mandatory vaccination policy. Companies not enacting a vaccine mandate must enact mandatory testing for unvaccinated employees on a weekly basis as well as require face coverings.

“NWRA appreciates the work of OSHA and our federal partners to keep our industry and the nation’s workforce safe during this global pandemic. Our staff is fully vaccinated, and we have encouraged the waste and recycling industry to do the same,” said NWRA President and CEO Darrell Smith in a statement following the announcement. “The industry and the country do not need a waste crisis.”

David Biderman, executive director and CEO of SWANA, echoed a similar sentiment: “SWANA urges all solid waste employees to get vaccinated, and for private sector and public sector employers to encourage their employees to do so. We have seen what happens in various communities when there are not enough workers performing collection, and more than 1,000 unvaccinated Americans continue to die each day.”

The polarizing issue of a vaccine mandate has caused an interruption in trash collection in New York City, where 9,000 workers were on unpaid leave for being unvaccinated. Mayor Bill di Blasio's mandate, which was announced on October 20 and took effect on November 1, caused backlash among municipal workers. As of that date, 1 in 6 sanitation employees still had not received their first dose of the COVID-19 vaccine.

Prior to the ETS announcement, municipalities shared their insight about how COVID-19 has played a part in operations, particularly with battling labor shortages.

"We've encouraged staff to get the vaccine, but then we've done a lot of cross training that we haven't done in the past," said Jaren Scott, executive director of Utah-based Trans-Jordan Cities, at WASTECON. "We're able to get other people to know multiple positions. It's vital that we can do many things. So, that's been very, very important."

If a Trans-Jordan employee has been vaccinated, they are asked to leave immediately and spend three days at home until they return a negative test. Workers who are unvaccinated are quarantined for 10 days from the date of the last contact with somebody that has had symptoms. Scott reported that between 60 percent and 65 percent of the company had been vaccinated as of the beginning of November.

The company launched an incentive program mirroring the state of Utah's initiative. Fully vaccinated staff receive up to $250 to get vaccinated and an additional $50 when a booster shot is completed.

Walter Barrett, organization manager for San Antonio's Solid Waste Management Department, reported that roughly 6,500 employees out of the city's 12,000 employees have submitted vaccination documentation. He attributed the 54 percent vaccination rate to an incentive program that was launched in August.

"Back in August, when the incentive program actually started, if you were fully vaccinated, you received $300," Barrett explained. "If you got vaccinated prior after August, it was a $200 incentive. Now that incentive is down to $100."

In Clearwater, Fla., city workers did not have to comply with a vaccine mandate, nor has an incentive initiative been enacted. However, procedures placed unvaccinated workers on unpaid leave if they tested positive.

"We coordinate when somebody reports that exposure or tests positive," said Earl Gloster, director of solid waste, City of Clearwater. "Our coordination goes through our city's emergency manager, and we do tracing through that process. And same scenario. They have 10 days off if they haven't been vaccinated."

The newly announced OSHA ETS will likely change the face of how the public and private sector addresses COVID-19 vaccines, and it could be costly. Under the new standard, employers are required to provide paid leave for workers to get the vaccine, with special considerations for those who need to recover from side effects.

Businesses must comply with the new provisions outlined in the ETS within 30 days as of the date of publication in the Federal Register and comply with testing requirements within 60 days. Employers who choose not to comply may face "significant" fines, according to OSHA.