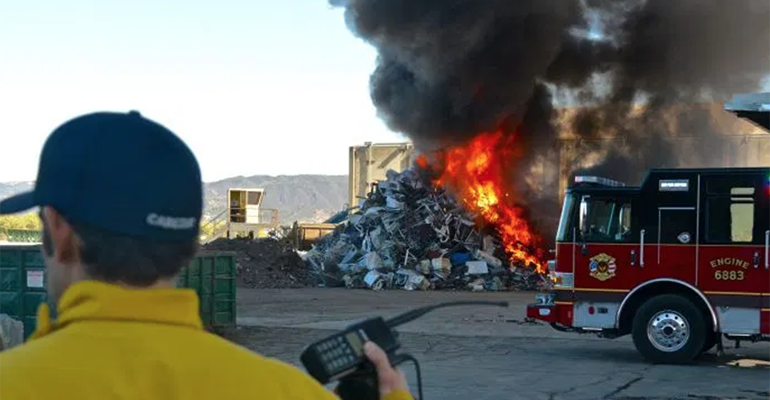 October 2019 saw the lowest number of reported fires since October 2016.

Can we celebrate? Considering that in July, August and September of this year we have experienced record high numbers of fire incidents, I remain cautiously optimistic and hope for November's and December’s numbers to follow suit. As Lou Brown, the fictional manager of the Cleveland Indians, so famously belted out in the cult hit “Major League,” “We won a game yesterday. If we win one today, that's two in a row. If we win one tomorrow, that's called a winning streak.” 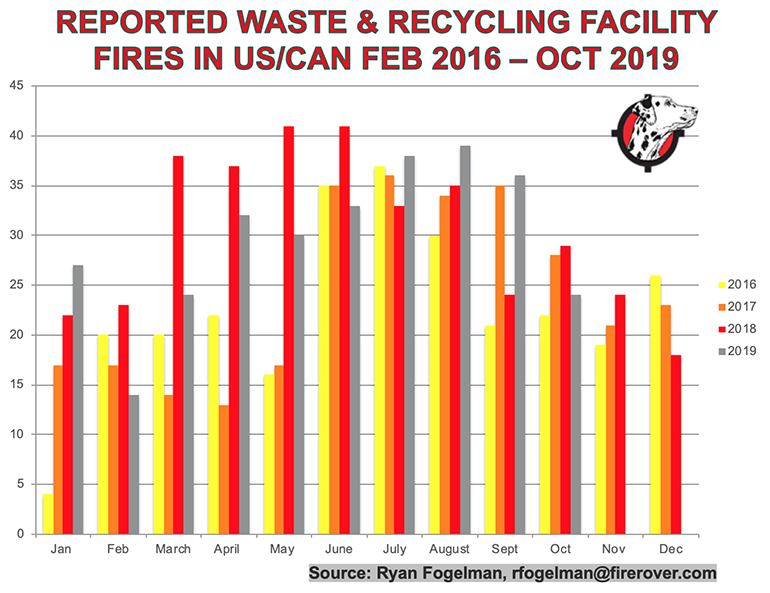 During the past 12 months, the waste and recycling industry has experienced 339 reported facility fires in the U.S. and Canada. Based on reasonable assumptions, we can extrapolate that 1,800-plus facility ﬁres have occurred during that time, which, based on the number of facilities reported by the Environmental Research & Education Foundation, is more than 40 percent of the industry. I define “reported facility fires” as any fire that has been reported by the media that occurs at a waste or recycling facility in the U.S. and Canada. Typically, the fires reported by the media are larger fires that require fire professionals to arrive on scene and have effects the public can witness. 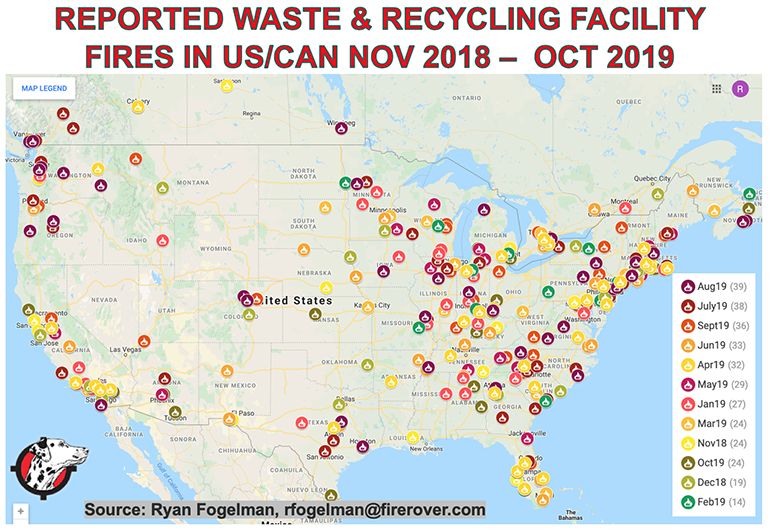 In my position with Fire Rover, I am fortunate to be on the frontlines helping my clients mitigate their risks through innovating the way the waste and recycling industry prepares and combats risk of fire. Not only do I get to interact with my clients, but I am fortunate to work with the top firefighting professionals in the country to develop solutions that properly and most effectively fight a fire incident.

I have defined the approach I take when helping my clients as “stratactical.” I focus not only on developing and strategizing the proper fire safety plan, but I also focus on executing on tactics that can make a real difference between suppressing a small fire or hot spot and going back to work versus the alternative of burning down an entire operation.

Most of us in the U.S. and Canada are not aware, but in 2015 in the U.K., the Environment Agency issued the Fire Prevention Plan (FPP) Guidance document. The guidance document was prepared by the Waste Industry Safety and Health Forum with input and support from Environmental Services Association, the Chief Fire Officers Association, Chartered Institution of Wastes Management and other interested groups.

Since 2016, there has been a requirement for any waste and recycling facility to have a formal FPP in place in order to get environmental permits or variances. The FPP was developed with the following three core objectives:

These core principles made sense when operating under traditional firefighting capabilities available at the time, but I would suggest these principles need to be updated to the approach I have been pushing since 2016. Specifically, that four hours’ time is too generous and that we need to hold success and failure at extinguishment “upon the fire professionals’ arrival.” The fire professionals should come onsite to perform final extinguishment only after a sprinkler system has been set off, a deluge system has been activated or an early thermal detection and response system, like the Fire Rover, has done its job.

We do not have a regulatory agency as they do in England. We are only held to the local jurisdictional standards that typically follow National Fire Protection Association-suggested rules and guidelines. Along with local jurisdictions, the motivation to improve fire planning in our waste and recycling facilities has to come from within, along with a healthy push by the insurance companies forced to mitigate their insured risks.

I listened to John E. Schumacher, a vice president from Assurance, present at the 2019 Paper & Plastics Recycling Conference a couple weeks ago. He was very clear that insurance companies, which used to “check the box” when it came to satisfying safety requirements during their audits, are now demanding a much more robust plan from their insured. They expect the companies they insure to take a proactive approach to mitigating their fire risk. What was clear from Schumacher’s presentation is that when it comes time for renewal, every waste and recycling facility in the industry needs to do all they can to “lower their operations risk profile” to get the best package from their insurance company(s).

The fact is having fires is OK as long as you can catch and safely suppress them before they become a major fire incident. There are several industries that have inherent fire risk in their operations. These industries typically have some sort of protection that makes this risk manageable. The approach that I recommend to my clients when asked for advice on how to lower their operations risk profile is as follows: 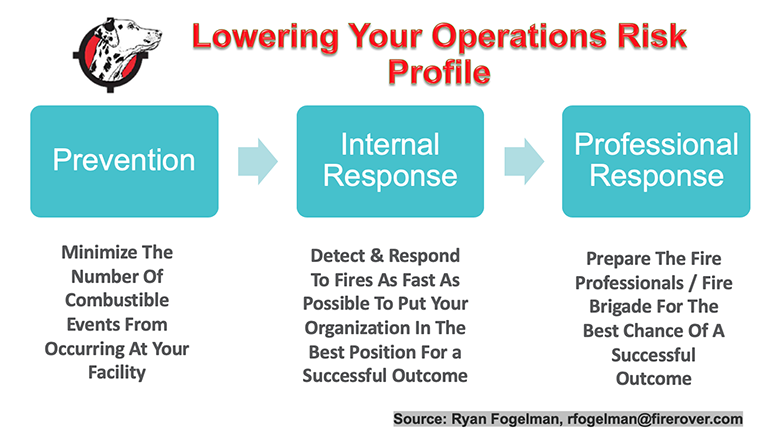 Prevention. The most important part of fire prevention is to develop a plan of attack. Prevention is the basic blocking and tackling and should include all components of minimizing the potential number of events that can occur at your facility. Examples of this include having limits on size and height of your in-feed and feedstock piles; regularly cleaning the facility so it is free of dust that can combust; developing a disciplined hot works program; clearing your working floor; keeping proper pile separation so fire professionals have room to maneuver; having the proper fire protection in place commensurate to the amount of material being processed at your facility; identifying aerosols or propane tanks during presort; safety training of employees; and, last but not least, educating the public on properly disposing non-hazardous material in the waste and recycling stream. For more specifics around the “Combinational Approach” to fighting waste and recycling facility fires, take a look at my article on how to reduce the fire risk profile of your waste and recycling facility.

Internal Response. This is key. I typically tell folks that early detection is the key to catching and mitigating a fire early. The goal is not just to catch a fire when there are flames but to understand that there are situations where hot spots can be cooled before they flame. Overlaying smoke analytics into detection is imperative as it helps when we are dealing with deep-seated fires where smoke is the first sign. The faster we can detect a fire and apply an environmental cooling agent to the affected area, the better the chance the firefighters will arrive on scene with the fire fully suppressed or under control.

The goal is to set the trip wire as early in the process as possible. This can be done through top-grade thermal detection in combination with smoke and other analytics and, most importantly, a highly trained agent able to weed through false positives in an effort to fight only the incidents that need fighting. This is a key point that anyone can purchase a top-grade thermal camera, but just like most hardware and software are not off-the-shelf solutions, neither are these highly sophisticated pieces of equipment. To work properly in our highly active environments takes investment, skill, training and experience. Just as I would not know the first thing about running a recycling or hazardous materials facility, I would suggest leaving the highly specialized skill to the experts.

Professional Response. Another extremely important part of the internal response is to prepare the professional response. Investing in having the proper equipment for the fire department onsite can be a huge timesaver. Even going as far as attached and rollout hoses so the firefighters can immediately start applying suppressant to the affected area can make a huge difference. Investing in a compressed air foam system can save valuable time for the fire professionals as well, as they can fight a fire within less than a minute of arrival.

Most importantly, having an active relationship with your local fire department is imperative. They are the folks who will decide whether or not they actively fight the fire or take a defensive position where they do their best to contain the fire to the immediate area. The truth is that the goal of the fire department is to ensure that all of their department members make it home to their families. Fighting waste and recycling fires is hard enough when the fire department has a relationship and is familiar with the facility, exits, equipment, piles and storage amongst every other factor. Fighting these fires with all these factors as unknown would bring trepidation to any rational fire chief.

Ultimately, as an industry, we need to make a choice. We need to focus on dealing with the inherent risk of fires we encounter by developing processes and solutions that catch and suppress fires as quickly as possible. We spend so much time of our time and resources on educating the public of the hazards of improper recycling in an effort to get these hazards out of the recycling stream. The issue that we face is that education only focuses on one piece of the problem. We see these hazards in construction and demolition, metal recycling, municipal solid waste processing and more. Don’t get me wrong, educating the public on their unintended effects is important, but in my opinion, we can get more bang for our buck investing in safety processes, plans and technologies that truly mitigate the fire risks before they have a chance to become a major incident.

If you are interested in learning more, you can view my latest session from the “Charging Into The Future of Lithium-ion Battery Workshop.” I will also be presenting on the Impacts of Fire Incidents on Organizational Costs at the 2019 Hazardous Waste & Environmental Response Conference being held in Mississauga, Canada, on November 25.

Ryan Fogelman, JD/MBA, is vice president of Strategic Partnerships for Fire Rover. Fogelman is focused on bringing innovative safety solutions to market, two of his solutions have won the distinguished Edison Innovation Award for Industrial Safety and Consumer Products. He has been compiling and publishing the “The Reported Waste & Recycling Facility Fire In The US/CAN” since February of 2016, the “Waste & Recycling Facility Fire Annual Report” and speaks regularly on the topic of the scope of fire problems facing the waste and recycling industries, detection solutions, proper fire planning and early stage fire risk mitigation.