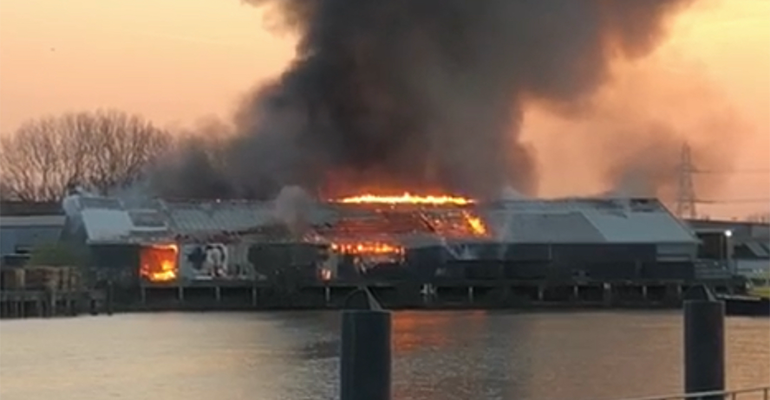 Due to the amount of fire incidents in the waste and recycling industry, insurance companies are rapidly leaving the sector.

During the past 12 months, the waste and recycling industry has experienced 346 reported facility fires in both the U.S. and Canada. Based on reasonable assumptions, we can extrapolate that 1,800-plus facility ﬁres have occurred during that time, which based on the number of facilities reported by the Environmental Research & Education Foundation (EREF), is more than 40 percent of the industry. There was also one death and 13 injuries reported during that time. 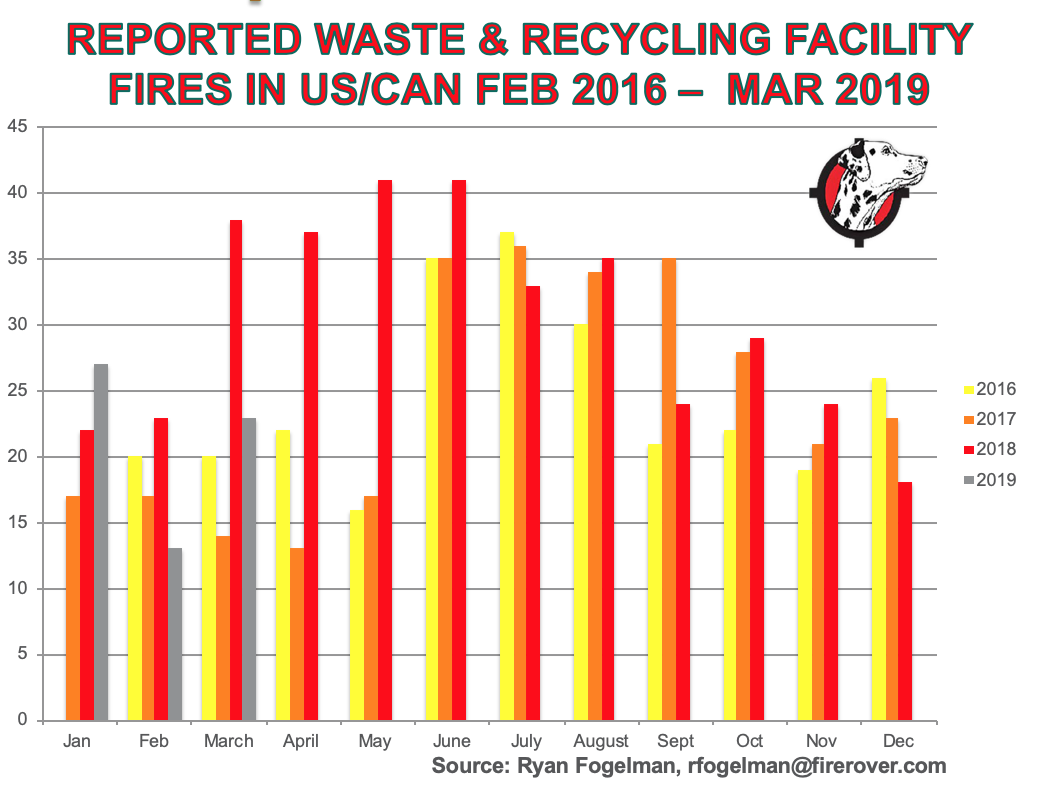 After coming off a February low of 13 fire incidents, we experienced 23 reported fire incidents in March. The numbers are down from last year’s spike in fires but still more than we incurred in 2017 and 2016. I am anxious to see if the trends hold true for April, May and June. 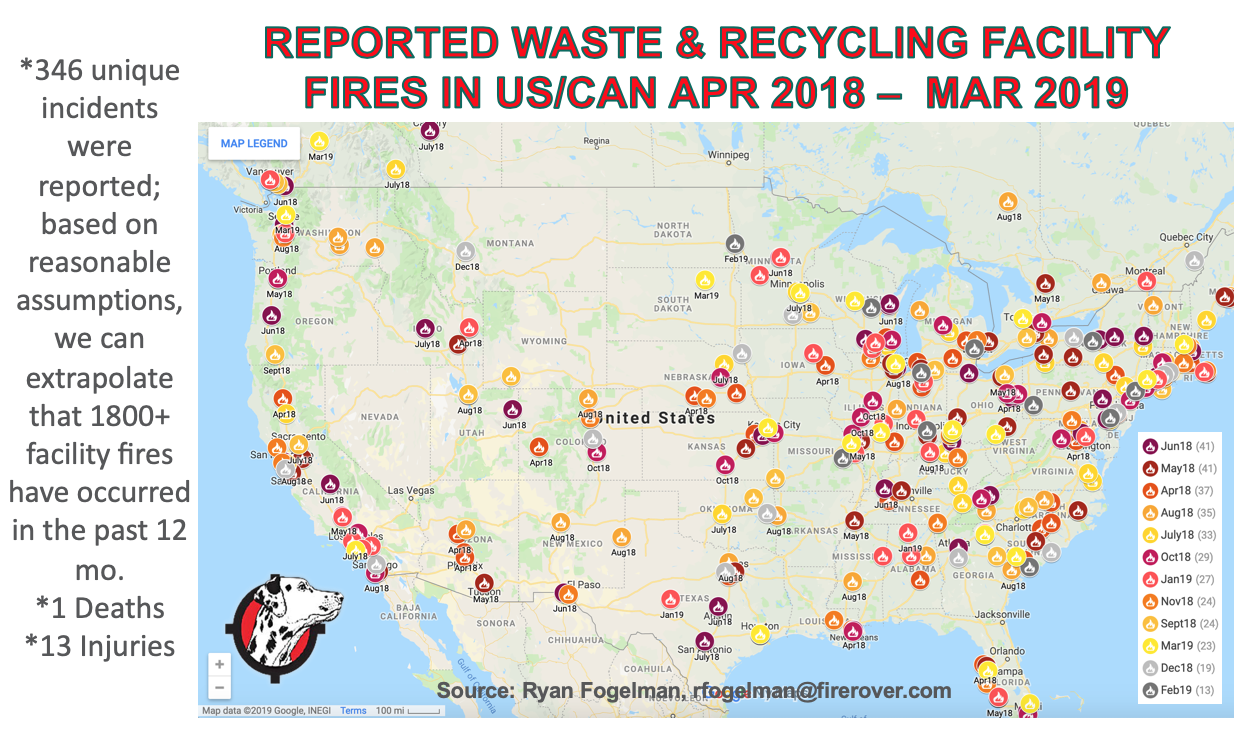 As most of you reading this already know, I have been collecting the publicly reported waste and recycling facility fire data since the beginning of 2016. Interestingly enough, I recently sat in on a presentation with Nathan Brainard from the Insurance Offices of America (IOA), who has been collecting private data from the insurance companies that he sees leaving the market at a rapid clip. As you can see from the chart below, Brainard’s number of incidents is eerily similar to the publicly reported number. The only difference that I see is that his numbers also include landfill fires. 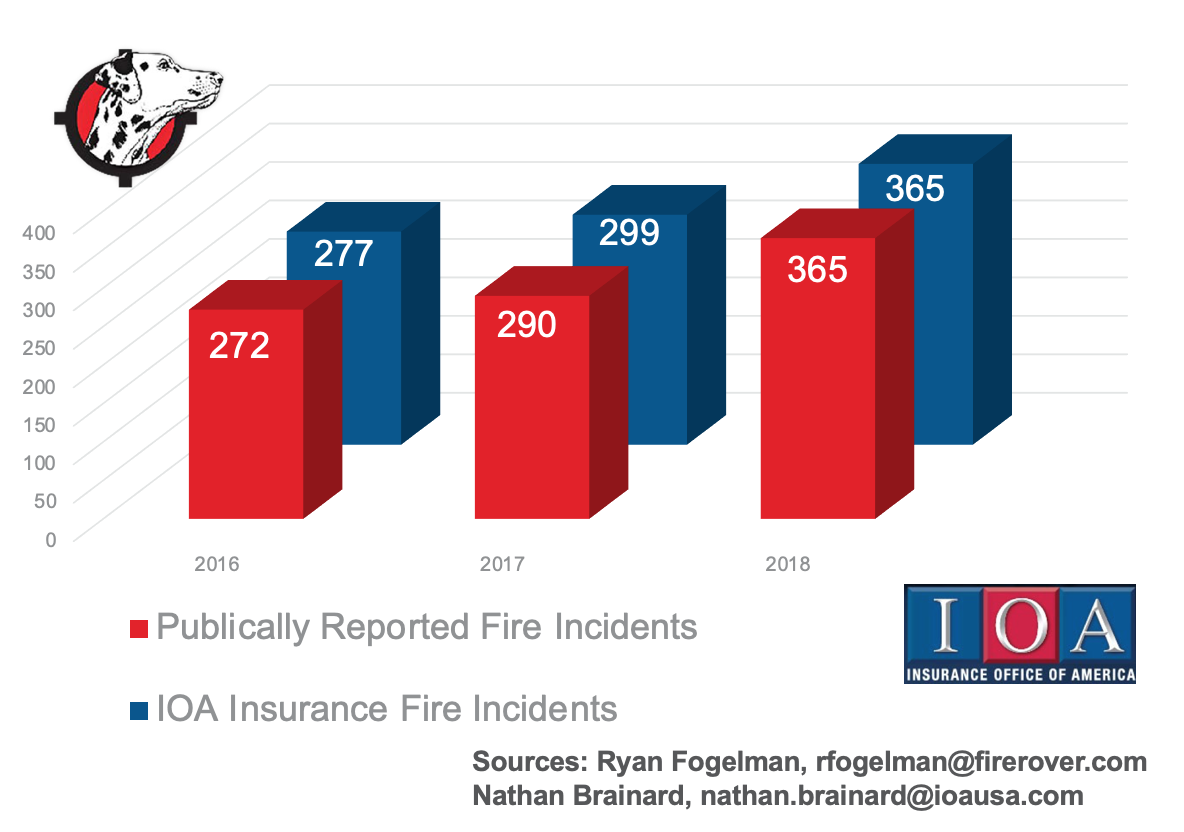 Although the numbers are similar, the real story in Brainard’s data is consequences to the industry we are seeing due to these fire incidents. Insurance companies are hightailing it out of the sector. Check out Brainard’s chart below that describes the number of insurance carriers (Domestic, International & Program). The industry, which as little as three years ago had almost 50 insurance options, now has less than 10. 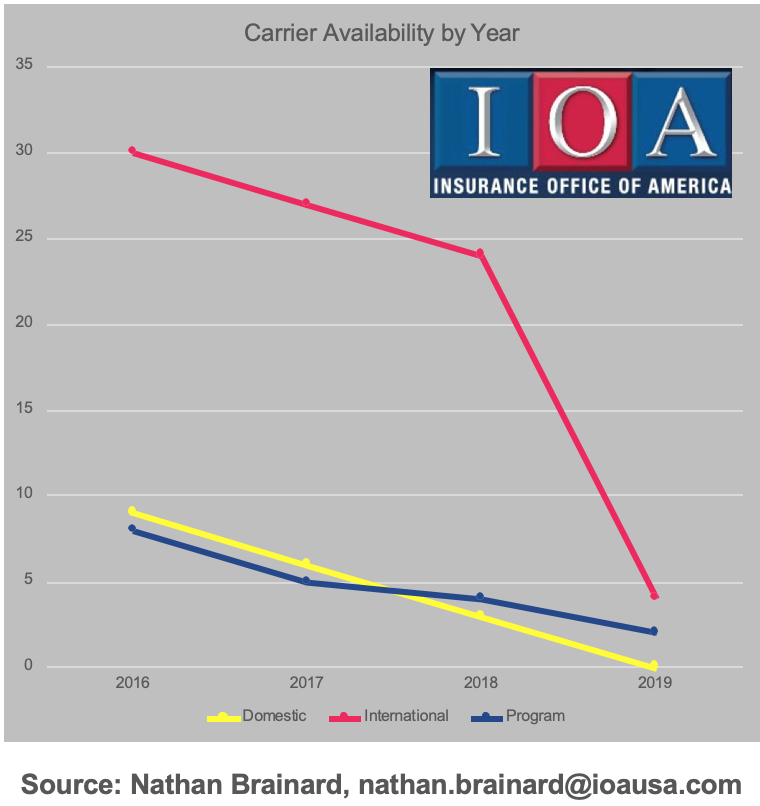 Just ask Hilary Gans from the South Bayside Waste Management Authority (SBWMA) in Northern California. During our CalRecycle webinar on the dangers of lithium-ion batteries and safety, Gans said that his materials recovery facility’s (MRF) insurance premium went from $100,000-plus to more than a million after its first major fire, and the MRF was told it would be uninsurable if it had another incident.

The fire hazards I typically see in the waste and recycling industry range from traditional material hazards such as pressurized tanks, equipment, chemicals, hot work activities, hazmat and smoking to newer hazards like lithium-ion batteries. Brainard’s data goes one step further in listing the causes of the fires that occur in waste and recycling facilities, and the largest hazard based on the number of losses is by far and away the shredders. I am seeing shredders as a major cause of scrap metal fires and e-scrap fires incidents.

It is also interesting to note the increase seen by Brainard’s insurers over the past three years with fires due to lithium-ion batteries. 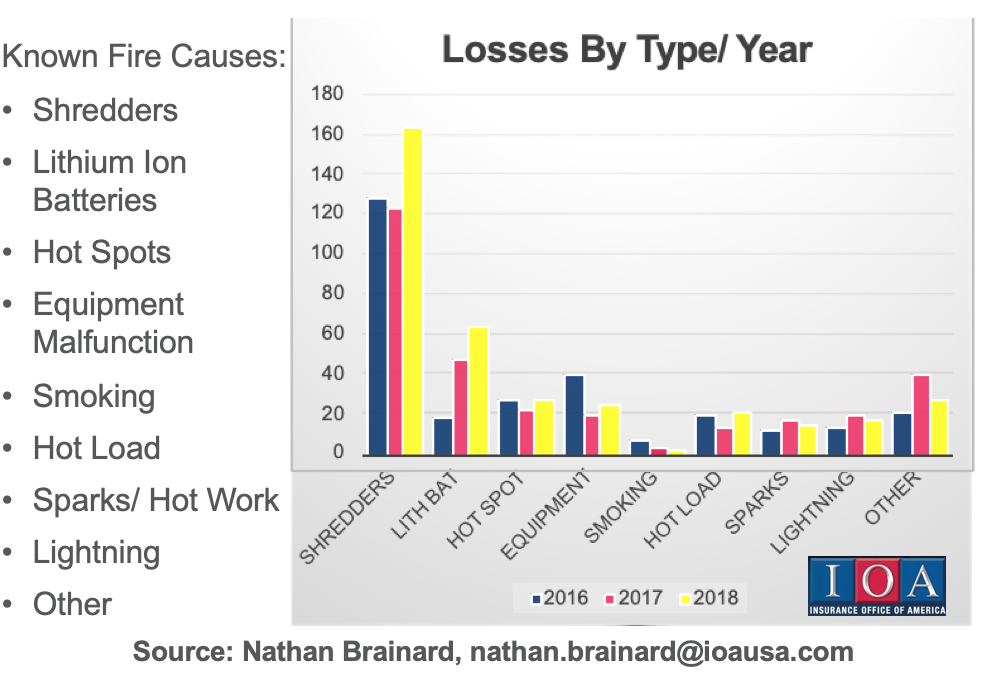 So, what’s a company to do? According to Brainard, companies need to lower operational risk profile with fire planning that includes:

IOA’s data on its own, just like my data on its own, doesn’t tell the entire story, but I think we call can agree that the only way to combat a problem is to understand the true extent of that problem. As companies like Fire Rover and IOA work to lure insurers back to the industry by improving our safety record, we need to provide these prospective insurers solutions that mitigate their risk and give them the confidence that we have solved our fire problem through proper fire planning, investments, training and education.