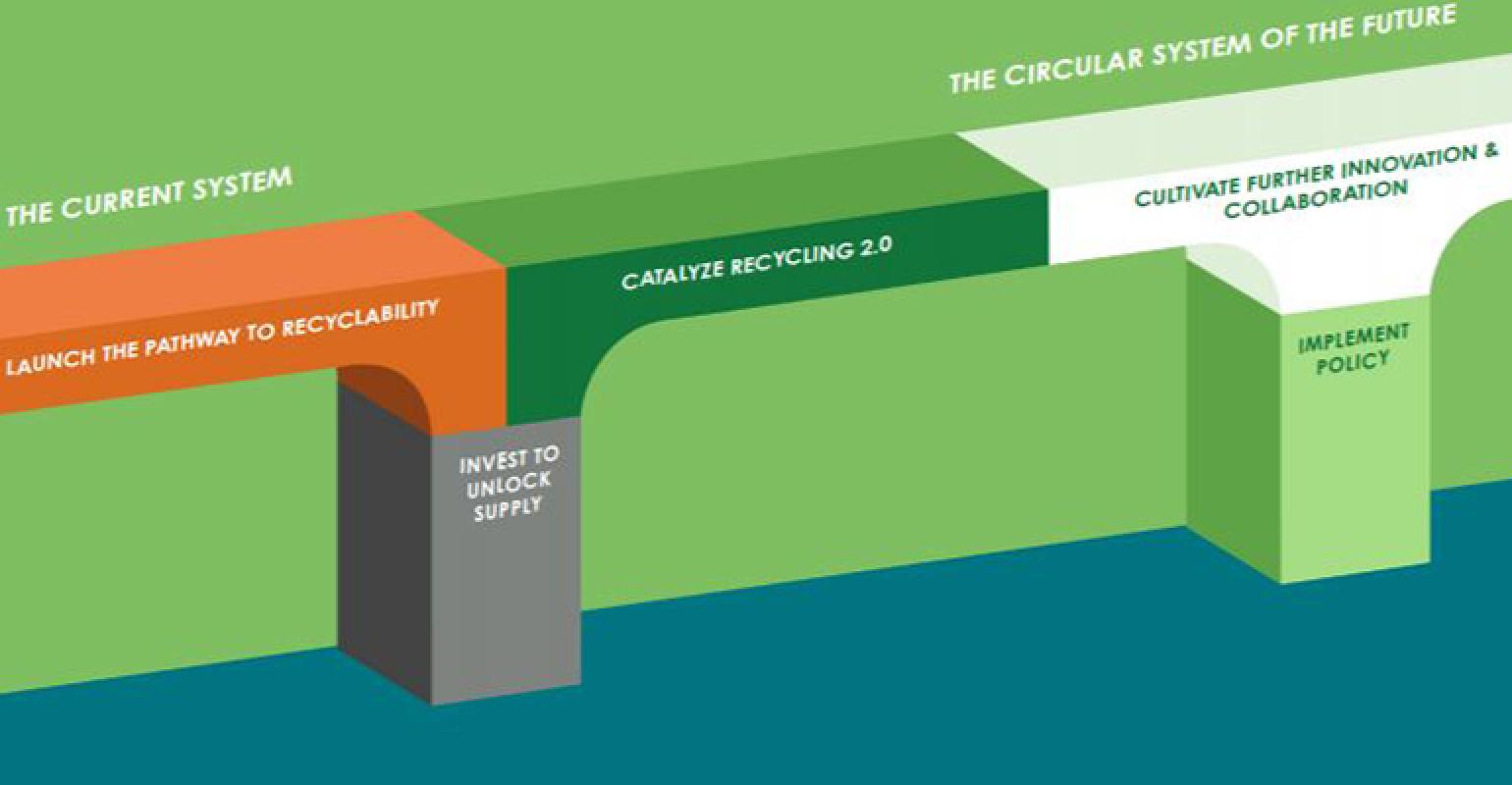 The first-ever roadmap aims to address systemic issues in the U.S. recycling system and catalyze the transition toward a circular economy for packaging.

The Recycling Partnership announced the first-ever roadmap aimed at addressing systemic issues in the U.S. recycling system and catalyzing the transition toward a circular economy for packaging. The report, “The Bridge to Circularity: Putting the ‘New Plastics Economy’ into Practice in the U.S.,” is inspired and endorsed by the Ellen MacArthur Foundation, whose New Plastics Economy Global Commitment unites more than 400 businesses, governments and other organizations behind a common vision and targets to address plastic waste and pollution at its source.

According to the report, there is no single solution to transition to a circular economy⁠—an economic system aimed at eliminating waste by design, keeping materials in use and regenerating natural systems. To build a bridge between the current system and an optimized circular system, The Recycling Partnership is calling for a set of concrete actions based on three distinct issues currently undermining the U.S. recycling industry:

1. The speed of packaging innovation has outpaced the capabilities of recycling infrastructure. Most plastic packaging is either not being collected for recycling or is simply not currently recyclable. To meet the New Plastics Economy Global Commitment target that 100 percent of plastic packaging will be reusable, recyclable or compostable by 2025, brands, organizations and governments must align packaging with the realities of the current recycling system while also investing to advance the system.

“Pathway to Recyclability:” The Recycling Partnership is initiating a more granular process detailing how to move a package from technically recyclable to commonly accepted for recycling with partners such as the Sustainable Packaging Coalition and the Association of Plastic Recyclers. Collaboratives are also being launched with the goal of optimizing the system for multiple materials and packaging formats, including but not exclusive to plastics.

2. As it stands, the U.S. recycling system cannot deliver the supply of recycled materials demanded by the Global Commitment. In fact, the report uses the case study of polyethylene terephthalate (PET) bottle recycling and finds an annual gap of more than 1 billion pounds between the current U.S. supply and projected demand for recycled PET in bottles, and that is just one packaging material type among many. It will be impossible for many companies to meet their ambitious recycled content commitments without significant interventions in the recycling system.

“Unlocking Supply:” The Recycling Partnership will launch an industrywide $250 million residential recycling intervention to capture more than 340 million pounds of post-consumer plastics, in addition to more than 2 billion pounds of other packaging materials. The report identifies specific strategies to put the capital to immediate use to benefit U.S. communities.

3. Intractable, underlying challenges create a difficult environment in which to develop a sustainably funded and responsive future recycling system. Bold innovation, supported by transformative policy, is critical to tackling the extensive issues within the current system.

“Recycling 2.0:” This new initiative calls for $250 million over five years to design and implement the recycling system of the future by advancing technology, building more robust data systems and enhancing consumer participation. In addition, in early 2020, a new policy proposal will be launched to address the unique challenges in the U.S. packaging system with the goal of achieving a sustainably funded recycling system for all materials.

“Our current recycling system is fundamentally underfunded and incapable of delivering a circular economy without dramatic evolution. With this report, we are providing the clear roadmap to create a new and improved recycling system of the future,” said Keefe Harrison, CEO of The Recycling Partnership, in a statement. “We’re providing actionable solutions to help current and future partners build a sustainable and effective recycling system in the U.S.”

“To make this a reality, we’re calling for $500 million to fund these new initiatives,” added Harrison. “This will be the first step toward fully optimizing our nation’s recycling capabilities and ultimately building the bridge to a circular economy.”

The report recommends that plastics packaging be used as the entry point to catalyze system change. However, it repeatedly stresses the importance of building an improved system for all materials, not just plastics.

“Concentrating on plastics alone will not create a viable platform for a truly circular economy,” said Harrison. “Nor will recycling alone ultimately suffice.”

"Tackling the global plastic waste and pollution crisis requires concerted action at a global and local level. We are delighted to see The Recycling Partnership translate the ambitious targets of the New Plastics Economy Global Commitment into concrete and progressive actions to be taken in the U.S., urging businesses and governments in the country to step up efforts toward transitioning to a circular economy for plastics,” said Sander Defruyt, lead of the New Plastics Economy initiative at the Ellen MacArthur Foundation, in a statement. “Stakeholders in the U.S., as well as around the world, must address plastic pollution at its source, by eliminating the plastics we don’t need, innovating the plastics we do need and circulating them safely in the economy to keep them out of the environment."