Recycling E-Waste with Workers Looking for a Second Chance 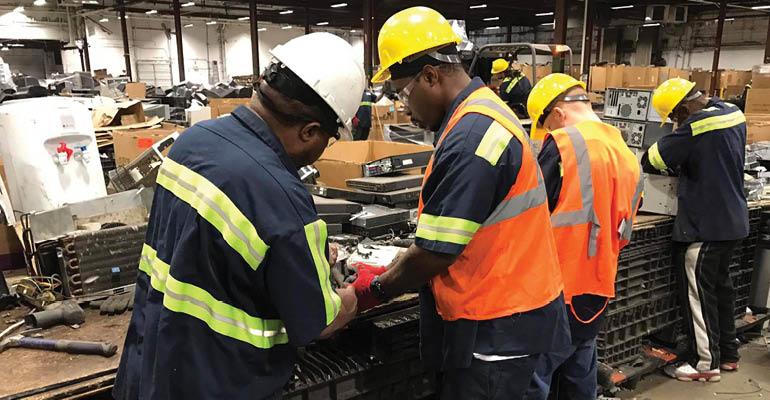 The recidivism rate of the ex-offenders it hires is 25 percent, compared to the national average of 76.6 percent.

Indiana-based RecycleForce is taking e-waste from businesses, governments and some residents and processing them using the labor of former prisoners reentering the workforce. About 350 to 380 come through annually for four- to six-month employment stints.

“That is a big a part of our job, to produce a workforce,” says Dawn Grimes, vice president of business and enterprise development, RecycleForce. “The revenue we generate and the jobs we develop support our social mission—not the other way around. So we are reclaiming the value of electronics, but even more so we are helping people reclaim value in their lives.”

E-waste, which is banned from the state’s landfills, generates $1.5 million in revenues from 9.5 million pounds of waste collected and processed in 2015 and 2016. While the nonprofit takes in plastics, aluminum, and other materials, it processes about a million pounds of electronics per month.

The nonprofit has about 20 supervisors and managers it has trained who were formerly incarcerated. These staff have gone on to mentor transitional employees who come directly from the court system or work release programs.

Half of the revenues, which pay for training and related support, are from sales of processed materials to refiners. The remainder is from grants and RecycleForce also has support of agencies tied into the criminal justice system and child support. These philanthropic partners help workers develop daily living skills and get an education.

“We can compete with anyone in the industry,” says Grimes of the nonprofit. It has increased its capacity and can now processes nearly 12 million pounds of material annually.

It recently invested in separation and sorting technology that recovers more metals of a higher quality that it sells directly to smelters. And it also landed some recent consumer recall projects, an ongoing business focus. It destroys defective products, tapping into a market that is not dependent on commodity pricing.

But the operation stays competitive largely due to its employees, says Grimes.

“Our full-time staff are enormously dedicated because they came from that system and want others to succeed too,” she says.

The recidivism rate of the ex-offenders it hires is 25 percent, compared to the national average of 76.6 percent.

Collection services are fee based varying by product and quantity processed. Materials are collected, disassembled and completely shredded. They may be manually de-manufactured depending on the material.

Drive-through recycling services are offered as a courtesy to communities. But this is only about one percent of the stream.

“We do this mainly to get people in to our facility to see who we are and what we do,” Grimes says. “We do not want them to feel afraid, as there can be stigmas attached to people who have been incarcerated who are transitioning into society. We want them to see they are ordinary people looking to do good work.”

As wholesale produce and specialty foods distributor Piazza Produce replaces electronics, it takes the old material to RecyleForce or the nonprofit picks it up.

Scott Lutocka, Piazza’s sustainability manager and zero waste business associate of the U.S. Green Building Council /U.S. Zero Waste Business Council, says the Indianapolis, Ind.-based company switched from its former electronics recycler to RecycleForce after he learned of the company’s mission, and after he saw the process firsthand.

“They are a great asset in Indianapolis and central Indiana, helping businesses to comply with a ban on electronics and [in some cases] helping companies secure a good workforce,” Lutocka says.

Piazza’s sister company, Indianapolis Fruit, hired a few former RecycleForce employees as drivers once they had been reoriented to the workforce.

A few other waste companies have similar missions. Impact Recyclers’ certified e-waste recycling facilities comprise a national network, also focused on creating jobs for people who have a hard time securing and maintaining employment, many who are along the autism spectrum.

UTEC, mattress recyclers, teaches high-risk youth industry-speciﬁc skills and pays them to work in its mattress recycling facility or its other operations.

This social mission-driven model type is what sold Lutocka on RecycleForce.

“This is a prime example of closing the loop, reclaiming not only the value of materials but of these ex-offenders. And they are providing us with a valuable waste solution,” he says.