Highlights from the Resource Recycling Conference 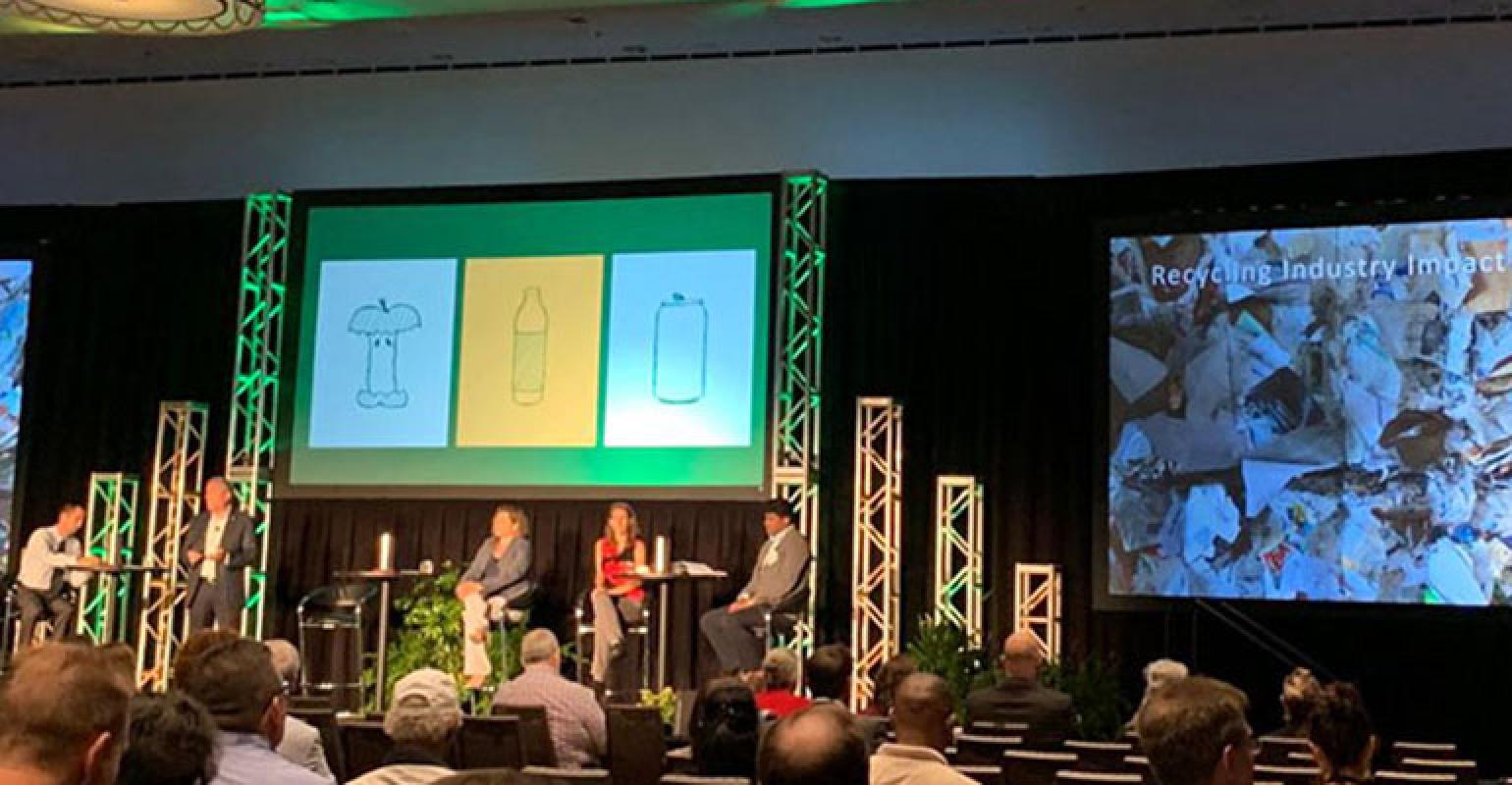 In this month’s edition of Business Insights, we discuss highlights from several sessions of the Resource Recycling Conference and Trade Show.

The Resource Recycling Conference and Trade Show was held in New Orleans from August 26 through 28. In this edition of Business Insights, we discuss highlights from several of the sessions.

We attended the popular, and often spirited, plenary session “Plastic Realities at the Municipal Level.” Michael Sangiacomo, CEO of Recology, first laid out a few plastic facts and figures, noting that 9.2 billion tons of plastic has been produced since 1950 and less than 10 percent of plastics get recycled globally. While markets for Nos. 1 and 2 plastics remain OK, Nos. 3 to 7 present a big problem, and mixed recycled plastic bale exports have dropped to almost nothing. In what became a repeated refrain at the show, he felt the plastics industry was missing from the circle and that its involvement was primarily focused on stopping plastic pollution from occurring in third-world countries, with the Alliance to End Plastic Waste focused on eliminating plastic waste in the environment. He stressed the need to make less plastic and ensure that what was made was actually recyclable. Also echoed by other speakers, he noted that using compostable materials as a plastic substitute was also faulty, given the incidence of per- and polyfluoroalkyl substances (PFAS) in them—and PFAS contamination is a topic of increasing focus in the industry.

Recology is firmly behind the recent pair of circular economy and plastic pollution reduction bills, which target single-use plastic packaging, that have been proposed in California. Zeina El-Azzi, co-founder of Brightmark Energy, spoke to the fact that chemical recycling can address a big untapped opportunity as Brightmark’s technology can handle Nos. 3 to 7 and other single-use plastics in a commercially viable manner to produce diesel, wax and naphtha. Brightmark’s plant is currently under construction.

Kate Bailey of Eco-Cycle stressed that plastics recycling alone isn’t enough, and plastic production must be reduced. She also noted problems with composting and stressed the need for reuse, as chemical recycling is not a “silver bullet” either. She noted that certain uses for single-use plastics make sense (particularly for medical purposes) but that many are avoidable and unnecessary. She added that Nos. 3, 6 and 7 are actually toxic in nature—why not stop the production of those and concentrate on Nos. 1, 2 and 5, which are not only safer but have more viable end markets?

Among other speakers, she also noted the need to get plastic recycling rates up, as less than 30 percent of even Nos. 1 and 2 plastics are recycled, given low collection rates and inadequate infrastructure. Ironically, now that brand companies have actually begun to step up in numbers, with recycled content goals from consumer product companies seemingly announced every day, not enough plastic is currently being recycling to meet the brands’ combined recycled content goals. And, although brands have begun to respond to the looming plastics crisis, it was also frequently noted at the conference that they must start to recognize the difference between what is theoretically “recyclable” and what can actually be feasibly recycled. Bailey talked about the Loop platform as the first real launch of a reusable plan with the brands behind it, which could potentially mark a real shift, but other participants noted that Loop could face economic and logistical challenges, particularly in rural or lower income areas.

In the session “Where Things Stand in Asia,” Joe Pickard of the Institute of Scrap Recycling Industries pointed out that the decline of recycled commodity exports to China has been shifted to Malaysia, South Korea and Hong Kong (among the biggest gainers), but there remains a gap. Obviously, mixed plastic scrap has been the hardest hit, with China banning it first, followed by Malaysia and Thailand, and there are now signs that India is tightening. Although recycled paper is still moving to Asia, quality requirements have tightened across the board, not just in China. He also noted that trade restrictions and tariff repercussions are now hitting nonferrous metals, and the UBC market, historically very reliable, is now being impacted. All participants echoed the belief that the Chinese market for recyclables is largely shut and will not come back.

Chris Cui of Closed Loop Partners spoke to the government focus on developing a circular economy in China and promoting domestic recycling, with increasingly strict trash sortation regulations and 10 cities now marked for zero waste pilot programs. All told, China’s actions are resulting in the desired outcome of both cutting excess domestic production and raising the domestic recycling rate, as well as causing some of its plastic and paper production to move overseas, as borne out by Chinese investment in U.S. mills.

In the session “Key Factors in Paper Recovery,” Brian Hawkinson of the American Forest & Paper Association said he sees about 2 million tons of capacity slated to come online that will use recycled paper as feedstock by the end of 2021, with a number of projects bunched into the first and second quarters of 2020. Shailesh Gothal of the brokerage firm Gemini Corporation noted the importance of the Indian export market in the wake of National Sword, and he believes it will remain a strong growth market for recovered paper export, in part due to the difficulties in increasing domestic collection in India. India has 700 mills, 65 percent of which are based on recovered paper feedstock, and growth of 50 percent in per capita consumption of paper is expected. India sources 45 percent of its recovered paper from the U.S., given its quality and cleanliness. That said, India is also tightening its environmental safeguards; its contamination standards are also rising, and Indian importers are demanding higher quality.

The demand for high-quality materials was a common theme across all the speakers. As for the near-term future of recycled paper pricing, the bottom line was that no one was willing to go out on a limb after the last year’s setbacks, though several speakers noted a recent, slight uptick from the summer lows. On a longer-term basis, several speakers spoke to their belief that the domestic and overseas mill capacity additions now announced (19 projects in the U.S., eight in Southeast Asia) will provide relief and drive prices higher. In any event, it appears that volatility is now the norm and stability the exception!

Boots on the Ground at the MRFs

Dave Claugus of Pioneer Recycling Services, which operates two materials recovery facilities (MRFs) in the Pacific Northwest, talked about paper as “the main event.” He noted that 75 percent of the yield of his MRF tip fee is from paper, and quality is paramount. Domestic mills are demanding 1 to 2 percent contamination rates, and the export markets are all trending to 0.5 percent. Bill Keegan of Dem-Con Companies, which runs MRFs in Minnesota, also touched on the MRF perspective. He noted that since Dem-Con took third-party volumes, the company had been charging a fee for service longer and, therefore, was in front of the new trends. That said, the blended price per ton at his MRF has gone from $140 in 2010 to $30 now, while paper quality standards have risen by four times, and the facilities are experiencing higher processing costs, in part from labor challenges. The company has combatted these forces with increased automation—increased use of robotics is projected to bring down labor costs by 40 percent, as well as enable the facilities to meet the higher-quality standards now required. Complicating matters, of course, is that MRFs, in general, don’t want what’s growing in the waste stream—flexible packaging, electronics and organics!

All that said, given the prolonged recycled commodity pricing downturn and historically poor current MRF economics, the general impression was that MRFs (at least presently) seem to have the upper hand when it comes to contract renegotiations—at this point, no one can afford to “just ride this one out,” while municipalities increasingly recognize that if they want to keep their recycling programs, prices and fees have to go up.