Single-stream Versus Dual Stream Recycling Management: Do the benefits justify the means?

Single-stream versus dual stream recycling management: Do the benefits justify the means?

Disclaimer: This study was conducted using municipal solid waste data from between 1996 and 2009 (the most recent data available at the time of the study). All facts and figures are correct in relation to the data used.

Florida wants to increase its recycling rate to 75 percent by the year 2020 and single-stream recycling may be one way to help reach that goal. Although there are many supporters and detractors for single-stream recycling, a closer look at how it has affected Florida since its inception in 2005 may help gauge the true results. By performing a quantitative analysis on the benefits of single stream and its effect on recycling rates and contamination rates in Florida, and by comparing those rates to counties that still maintain dual-stream recycling systems and contamination rates of the host counties of the end user mills, a better understanding of the true effects of single stream can be realized. 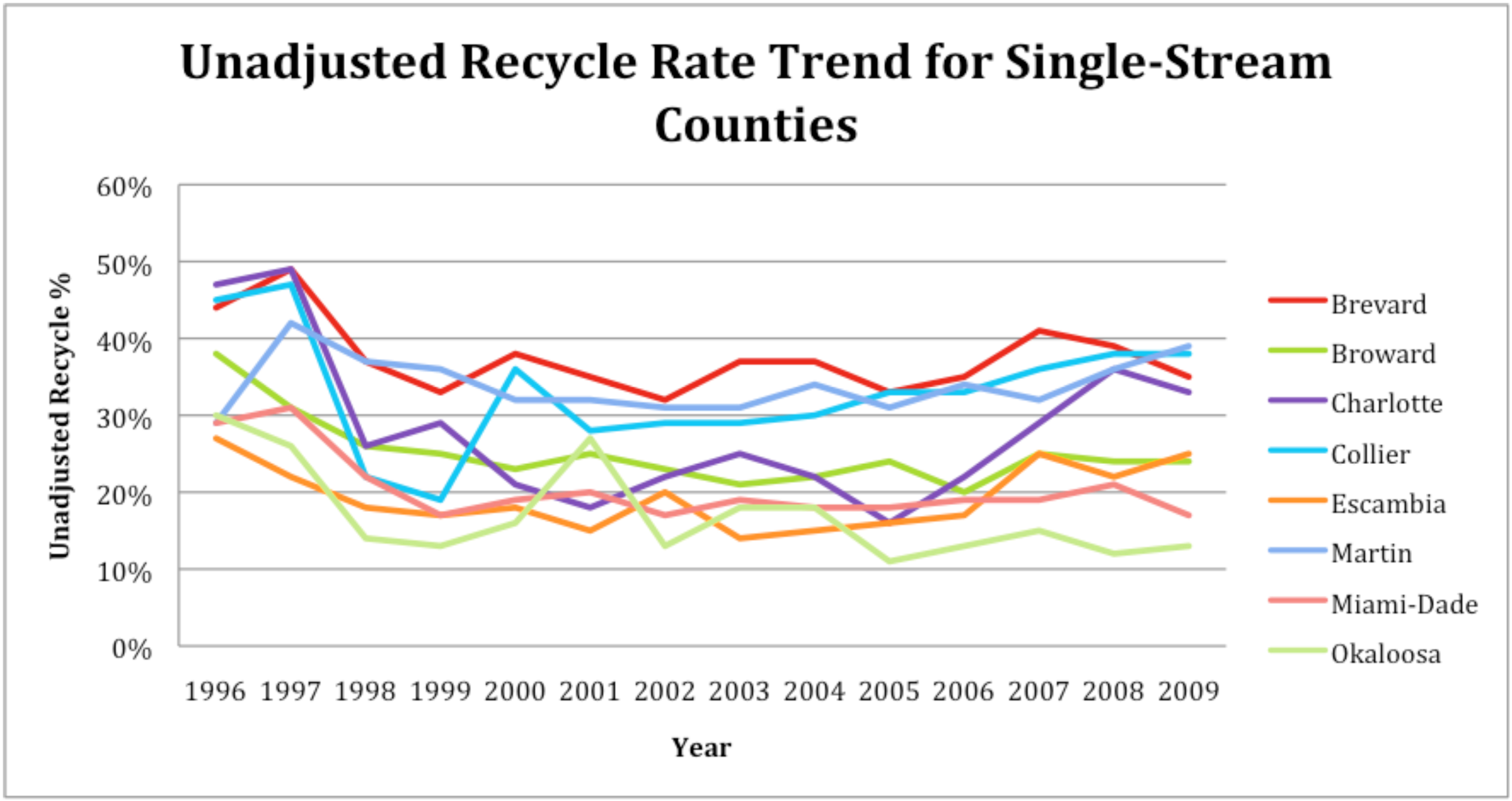 A quantitative research approach was used that compared several years of Department of Environmental Protection data related to municipal solid waste handling in the state of Florida, specifically data from 1996 to 2009. Comparisons of the data between counties that had converted to single stream and counties that still operated dual-stream were carried out to identify possible trends in recycling rates and contamination rates. The specific counties that converted to single stream were Brevard, Broward, Charlotte, Collier, Escambia, Martin, Miami-Dade and Okaloosa. Dual-stream counties were Duval, Hillsborough, Marion, Orange, Pasco, Pinellas, St. Lucie and Sarasota. Figure 1 illustrates the unadjusted recycle rate trend for the eight single-stream counties while Figure 2 shows the unadjusted recycle rate trend for the eight dual-stream counties. 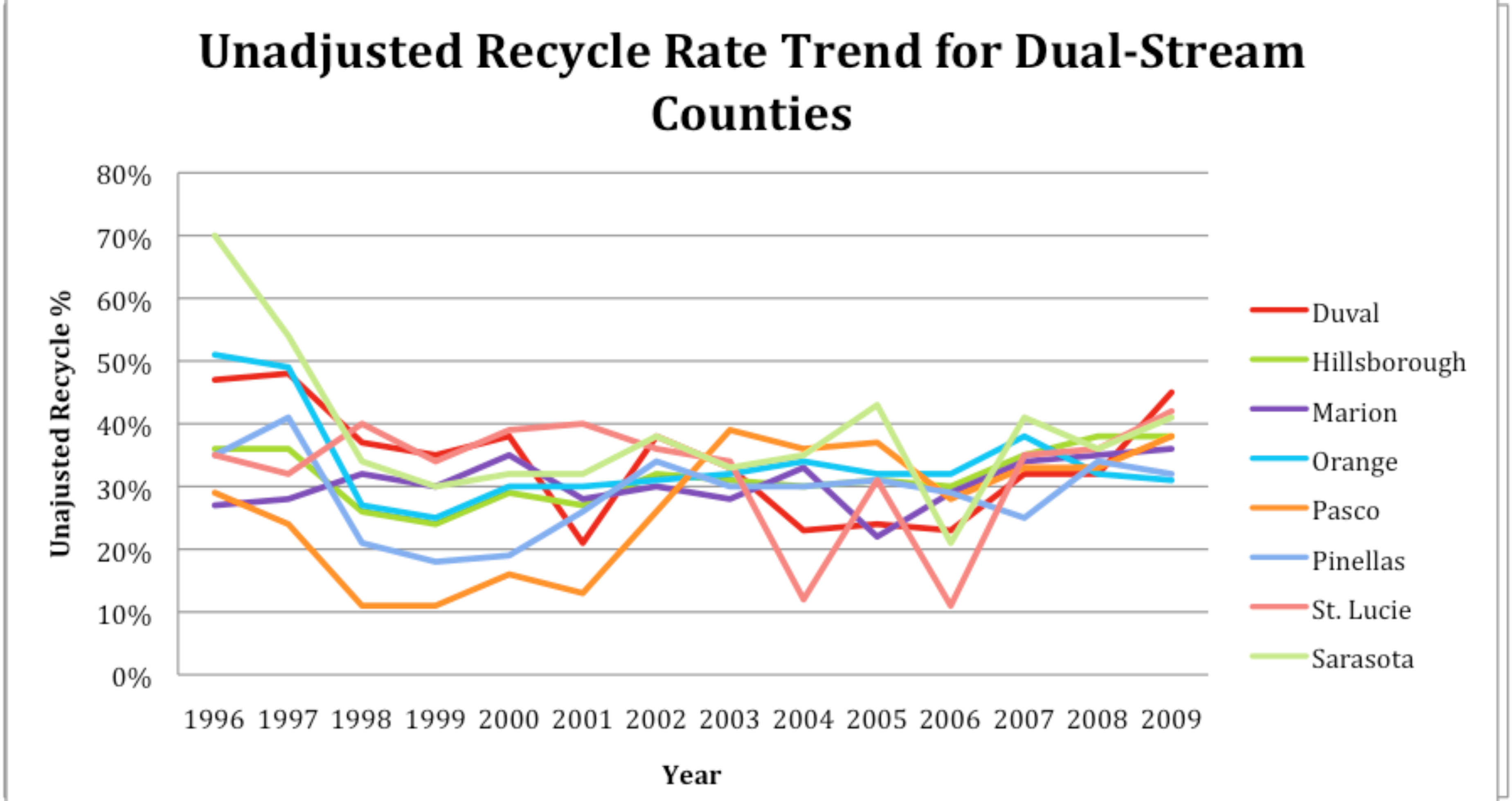 In addition, Hillsborough, Pasco, St. Lucie, and Sarasota counties all have recycling rates above 38 percent. This seems to challenge the conventional thinking that single-stream recycling brings in more material since the three counties with the highest percentages of recyclable material all operate under a dual-stream system and use 14-gallon bins.

A look at the rates to determine if the size of the bin had any influence on the recycling increases or decreases is inconclusive as Broward, Charlotte, Collier, and Escambia counties all use the 64-gallon bins and experienced increases while Miami-Dade County, which also uses the 64-gallon bins, experienced a decrease. In addition, Brevard and Martin counties experienced increases with smaller bins while Okaloosa County experienced a decrease. The two counties experiencing the greatest increase, Collier with an eight-point swing and Martin with five, use different sized bins, 64 gallon and 28 gallon, respectively. A larger sample size taken over at least five more years may be necessary in order to quantify a correlation between increased recycling rates and bin sizes.

Although a decrease in the amount of material going to the landfill should be positive, the landfill rate trend for eight single-stream counties indicates that the only county that managed to significantly reduce its landfill percentage was Martin County; Brevard, Broward, Charlotte, Collier, Escambia and Miami-Dade counties all saw reductions in their landfill percentage by at least two percentage points but still remain basically flat, while Okaloosa County managed to gain two percentage points. A closer look at the trend from 1996 to 2009 shows that six out of the eight counties are landfilling more material in 2009 than they did in 1996.

A material recovery technology review conducted by Pinellas County in 2009 discovered that the Orange County MRF maintained a recovery rate of between 92 and 94 percent and a contamination rate of 6-8 percent. This is further confirmed by a report conducted by SCS Engineers in 2008 that found that the Orange County MRF had an overall contamination rate of 8 percent. Although hard numbers could not be found for the Broward County MRF, SCS Engineers did indicate in its 2008 report that no Florida counties that employed single-stream reported any significant issues with contamination.

This data and the associated reports seem to indicate that there is little contamination of the material coming into MRFs from the supplying counties. It cannot be concluded, however, if errors in processing at Florida single-stream MRFs have contributed to increases in landfill rates in the host counties of the end-user mills. The evidence is compelling and there are indications that Florida single-stream MRFs may have sent contaminated material to some end-user mills, but without hard numbers from each individual end-user mill, conclusive results cannot be determined.

The benefits and issues surrounding single-stream recycling have been well documented in various trade magazines, engineering studies and government reports. These documents helped give a better understanding of the ongoing problems many states and counties face as they try to meet government-mandated recycling rates. Florida’s ambitious goal of 75-percent recycling by the year 2020, which replaced the earlier goal of 30 percent, helped set a precedent that required a new way of thinking about recycling. Single-stream recycling is just a small part of the larger recycling picture that Florida needs to look at in order to reach their 75-percent goal.

Several counties in Florida have commissioned studies to determine if converting their recycling programs to single stream would help increase recycling rates without causing increased contamination rates. Some counties determined that single-stream recycling was not the right program for their counties, either due to cost, participation, availability of feedstock, or other limiting factors. But many have embraced single-stream recycling and are encouraging other counties to convert in order to help feed their single-stream processing mills.

Many detractors of single-stream recycling point out that increased contamination often negates any participation or diversion-rate benefits. This increase in contamination results in increased costs and less available material for recycling at the end-user mills. Contamination can be significantly mitigated, however, by implementing good single-stream recycling practices such as limited compaction of recyclables in the trucks, removing glass at the front of the stream, and employing better sorting technologies, such as optical sorters, to get better separation of the material.

The goal of 75-percent recycling by the year 2020 is a challenge that will need to be met on several fronts. The Florida legislature considered how converting to single-stream recycling may be able to increase residential and commercial recycling participation and help increase the recycling rate. Although parts of Florida have been collecting single-stream material since 2005, the state still has not been able to increase its recycling rate above 29 percent. For the counties that are collecting single stream, some have shown increases in collected material but none of the counties examined has managed a significant increase and the best performing county is still only at a recycle rate of 39 percent.

It was also thought that bin size increased the amount of recyclable material and participation when counties converted to single stream. Research in this area has proved inconclusive and does not support this claim since some Florida counties with larger bins collected less material while some counties with smaller bins collected more. This discrepancy was further highlighted by the finding that the highest performing dual-stream county, Duval, had an impressive recycling rate of 45 percent and several other dual-stream counties had recycling rates of 38 percent or better despite using the smaller bins.

Studies indicate that, at least in the state of Florida, there has been no significant increase in recycling rates for counties that operate single-stream systems or collect material as single stream. The results also indicate that the size of the bin has little bearing on the amount of material recycled by a resident.

As for the increase in contamination rates as a result of changing over to single stream, a look at the landfill rates of several single stream feed counties and single-stream receiving counties showed that there was a correlation to landfill rates between these two entities. The research data showed that landfill rates decreased, on average, across both feed and receiving counties after single-stream recycling was introduced. This may indicate that more material was being diverted from the landfill as a result of increased participation in single-stream recycling. These results are inconclusive, however, since there may have been other factors that caused these decreases. A closer look at actual contamination rates at the single-stream processing facilities may be required to better assess these findings.

An interesting discovery, however, was that landfill rates decreased in single-stream counties but increased at some end-user mills’ host county landfills after single stream was introduced. These results were inconclusive, however, since there was not a consistent increase across all feedstock materials and at all mills.

In addition, since only landfill rates were used for the end-user mills’ host counties, the results could not be quantified because of other unknown limiting factors that may have skewed the data. To better quantify this data, contamination reports from each end-user mill along with contamination reports from each single-stream processing center should be acquired and those results compared to the landfill data to determine the true effects of those increases in landfilled material.

The research presented in this report shows that there is evidence that single-stream recycling may not be as beneficial to increasing the recycling rates in Florida as was previously thought. Although the data presented fails to highlight the benefits of single stream touted by the many supporters of this relatively new technology, it is ultimately inconclusive, indicating that further research may be necessary in order to support these findings. An in-depth study of the industry in another five years may help confirm whether the data in this study still supports the results.

Steven Byars is a retired Air Force veteran who worked in the recycling industry for four years. He was the project manager for the single-stream retrofit of a MRF in Orlando, Fla., and has been a plant manager for three separate sites. Mr. Byars left the recycling industry in 2009 and is currently a training consultant for the Royal Saudi Air Force in Riyadh, Saudi Arabia.