HomeRecyclingPlasticsFrom Bin to Beach: The Realities of Plastic Waste and the Great Lakes Region
Recent
WasteExpo 2022 Flashbacks
May 26, 2022
Fulcrum BioEnergy Successfully Starts Operations of its Sierra BioFuels Plant
May 26, 2022
Saint-Gobain Installs Recycling Technology at its Nashville, Arkansas Gypsum Plant
May 26, 2022
City of Bristol, Virginia Addresses Landfill Benzene Emissions
May 25, 2022
POLL
NWRA’s Healthcare Waste Institute Comments on FDA’s Proposed Rule for Medical Devices
May 25, 2022
Leadpoint Remembers Brian Haney, VP of Safety and Compliance
May 25, 2022
Veolia to Sell a Part of Its Industrial Water Treatment Services in France
May 25, 2022
Bioplastics and Human Behavior: A Real-World Study
May 25, 2022

From Bin to Beach: The Realities of Plastic Waste and the Great Lakes Region 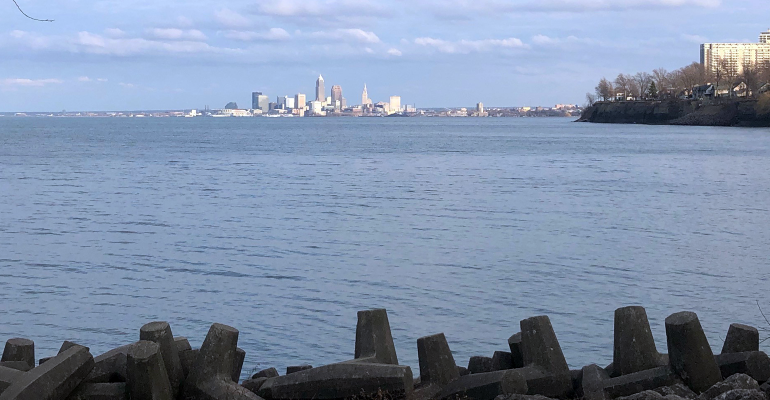 From the sturgeon down to the smallest microorganisms, plastics have been found in every creature in the Great Lakes region.

The five interconnected bodies of water are the world’s second-largest freshwater ecosystem by volume, and scientists have been working around the clock to preserve this precious resource.

During the Sustainable Cleveland 2020 Virtual Summit, experts explained how ingrained plastics are throughout the delicate habitat, the impacts on the local economy and what initiatives are being implemented to mitigate and reverse damage to the Great Lakes.

“There's been some studies done that show that organisms that have plastic in them such as plankton and fish have endocrine disruption,” she said. “That’s our hormones, and our hormones control everything in our body. So, it's altering their feeding, reproduction, growth and movement behaviors, which pretty much affects every aspect of that organism’s life.”

Entanglement also is an issue. While there has been entanglement data conducted on ocean systems, not enough has been done in the Great Lakes region.

Bartolotta said that she recently completed some work with wildlife rehab centers across the state of Ohio. Her research found that birds are the number one animal brought into rehab centers in the state because they become entangled in trash. Mammals and then reptiles follow behind the bird in numbers, respectively. Fish were not considered because they are not normally brought into wildlife centers.

“Fishing line was the number one item that was entangling these animals,” Bartolotta stated. “Then you would look at nets, mesh and fishing more. Mesh is actually that landscape mesh that's placed down to help grow grass. And that was actually an item that we weren't really aware of as an issue for our animals. So, we really need to work with landscaping companies to change their practices.”

Humans ingest plastic every day, the majority of it being microfibers shed from synthetic clothing such as fleece jackets and yoga pants.

“It's been estimated that humans are ingesting hundreds of thousands of fibers a year,” she said. “That's about five grams, which is about the size of your credit card.”

With all of the talk around the Great Lakes, Bartolotta pointed out that purchasing bottled water doesn’t alleviate the issue as it contains more than two times as much plastic as tap water. This happens when plastic particles enter the water through the lid.

Bartolotta also touched on plastic pollution’s impact on the economy of the Great Lakes region. She showed a graph that demonstrated the correlation between clean beaches and tourism dollars

“If we clean our beaches, we're going to see more visitor days, which leads to more dollars being spent and more jobs being created,” she said.

“Every year on this cleanup, most of what they clean up is woody debris. That stuff that could be composted – it could be put back in rivers to create fish habitat. However, it's so contaminated with these small pieces of plastic that they have to send all of this to landfill, because it's not worth their time to try and pick out the stuff that they can say. So, it's very expensive to have trash on our beaches,” Bartolotta stressed.

She concluded, “what we really need to focus on is preventing trash from getting into the system because it's so expensive to clean it up.”

Chelsea Rochman, assistant professor of Ecology, University of Toronto, took a step back to identify how plastic pollutants became so ubiquitous. She pointed to 1950’s magazine cover in which a more “convenient” lifestyle portrayed more time for leisure and less time spent on dishes. This is when single-use plastic manufacturing proliferated. Fast forward to today, where nearly 400 million metric tons of plastic is produced every year.

“But as we know, this convenient style of living can have its consequences, especially if we're not doing it in a sustainable way,” she said. “It's in the buildings we're sitting in. It's in the computer that I'm talking to you on and it's in the glasses that are on my face.”

While only 9 percent of all plastic ever used is recycled, an even smaller amount is incinerated, sometimes into energy. Humans discard more than half of the material that is produced, and much of it ends up in landfills.

In June 2020, Rochman co-authored “The global odyssey of plastic pollution,” a study that analyzed exactly how much plastic is displaced into global aquatic ecosystems annually.

The data showed that in 2016, between 19 and 23 million metric tons of plastic were emitted into aquatic ecosystems every year. Microplastics are of particular concern because of their size - five millimeters or less.

“If we don't change our habits, we estimate that this number might as much as quadrupled the 90 million metric tons by 2030,” she warned. “It's really not that long of a time. Now, luckily, no one's agreed on the future.”

While mitigation strategies have been suggested, even with implementation, 30 million metric tons of plastic will still enter global aquatic ecosystems. Despite this, cities can be leaders when it comes to fighting plastic pollution.

Rochman continued, “while we know that plastic pollution is about global issue and there's no doubt, which means we do need some sort of global coordination in order to help plastic pollution. We also know that waste is managed incredibly locally, right at the municipal level. And so cities can really be leaders in terms of acting locally, and thinking or helping the global situation.”

Municipal plastic mitigation waste efforts are particularly effective because urban areas are such a large contributor to the issue. Rochman used the Toronto Harbor as an example.

“We have really high concentrations of microplastics in the water, as well as in the sediment,” she said. “And that is because our city is a source of microplastics into a lake. And this comes from various different products that we use in our day-to-day life. And then they enter the lake through different pathways.”

“It's important to know what these are because they can inform mitigation,” she said. “These pathways vary by location, suggesting that local monitoring is important if you live in a city, and you want to quantitatively reduce the amount of plastic coming off of your city into - in this case - a Great Lake.”

There also are differences in pathways and their microplastic signatures. These can be used to demonstrate what exactly is contributing to contamination in a system. When combined, this information can inform local mitigation strategies.

When it comes to solving environmental issues, people too often focus on one solution rather than the whole picture, Rochman said. And the reality is, there is no silver bullet.

“There's no one size fits all strategy,” she continued. “And there's not just one thing we should do. When it comes to plastic pollution, there's a lot of different strategies that we can implement at the same time, and what strategies we might choose may vary by location, because they may be more appropriate in terms of economically, or culturally or just in terms of the sources that we have in our region.”