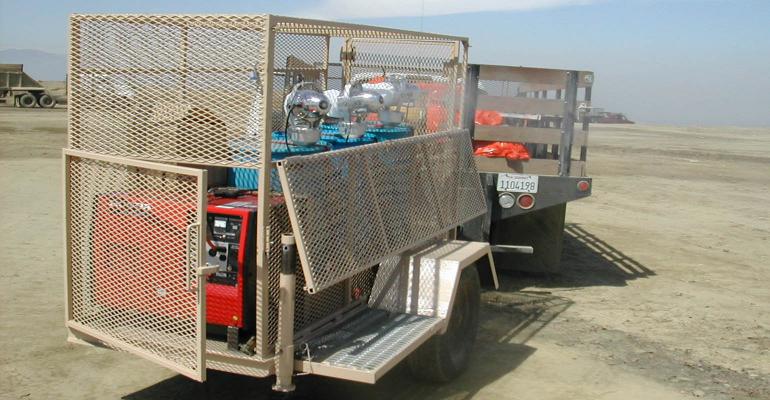 Landfill operators must tailor their odor control efforts based on how waste is deposited.

Dealing with landfill odors is an ongoing battle. Determining the source of the odor can be complex, and assessing the impact is no simpler.

There are a variety of ways landfills try to eliminate odors. Operators aggressively cover trash, and they routinely spray it to mask or destroy odors. Some have even invested in expensive drones that can get to hard-to-reach places to pinpoint odors or prove the landfill is not the source.

Despite these efforts, there are still stench issues, calling for a comprehensive prevention and mitigation strategy to avoid headaches, costly remediation and, in the worst case, closure.

With covered waste, it’s critical to have an efficient landfill gas capture system to avoid fugitive emissions that can cause odors. In the case of the working face, managing odor depends on how you deposit and compact trash, says Thomas Rappolt, vice president and office director for SCS Engineers.

One of the biggest mistakes he has seen operators make is spreading incoming waste over an unnecessarily large area and then cover it.

“This is done to take in more waste, but that [action] can result in serious odors,” says Rappolt. “The most effective first step to preventing odors on the working face is to cover solid waste as quickly as possible with at least six inches of soil after compacting it. Some cover it with wood chips that act like a biofilter, and they may spray it with masking or deodorizing agents.”

Buried waste is managed differently than that from the working face.

A challenge with buried waste is that it may generate more gas in one area than another, but the irregularity can be dealt with using a strong vacuum to capture excess emissions.

Knowing the odor’s origin and severity of the problem are important, but these factors are commonly misjudged, comments Rappolt.

The first step is to determine concentration of odors downwind, which requires an analytical approach. Information on wind direction and speed help sort out where the odors originate. Fairly inexpensive calibrated wind sensor systems can provide this information.

“We can simultaneously put various tracers at different sites, for instance at a compost facility, the working face and a leachate pond. They can be used where there have been complaints to determine, downwind, the source,” says Rappolt.

SCS developed a mini blimp with a remote navigation package to take measurements without disturbing the atmosphere or affecting the measurement’s accuracy.

Methods for reducing odors in the first place include eliminating certain streams, especially biosolids. However, that’s much easier said than done. Even municipal haulers bring in problematic garbage.

“We don’t send very odorous loads back on the street, but we would charge special handling fees and bury the waste right away,” says Frank Caponi, division engineer for Los Angeles County Sanitation Districts.

The district pays close attention to potential odors related to gas collection, including tied to installation of the system, and especially when the system includes horizontal trenches.

“With horizontal trenches, you have to dig up old waste, so we use odor mitigation measures like exposing only a limited trench area at a time,” says Caponi. “We quickly dig up the area, lay piping and then bury it.”

“We also have constant dialogue with the community since we have a hotline where residents can call about odor issues,” says Caponi. “With large sites fairly close to neighborhoods, we have even sent out patrols. It’s important to us to make the neighbors partners to ensure we are mitigating possible issues.”