In our latest episode of NothingWasted!, we chat with Ian Rosenberger, founder & CEO of First Mile and Day Owl.

First Mile supports micro-economies in underdeveloped communities by collecting plastic bottles and turning them into yarn that is used by apparel, footwear, and accessories brands including Day Owl, which sells sustainably created backpacks.

We chatted with Ian about leading through a crisis, the responsibility of business in solving the waste problem, creating a circular product, and more.

Here’s a sneak peek into the discussion:

Waste360: How did you find yourself in the world of sustainability products and solutions?

Rosenberger: I really never expected to end up in this world. I went to Haiti after the earthquake in 2010, and at the time I was in marketing and television production; about as far away from what I’m doing now as possible. I went there originally to take some photos to help raise some money to donate to a nonprofit—but I fell in love with the country, people and culture. And it became clear to me that the Haitians were not excited about the nonprofit system that existed—a lot of handouts and immunizations, but not a lot of people saying, “Here’s an opportunity to go to work.” I started looking around and saw a lot of plastic on the ground, and a lot of people who needed jobs, and I came home and Googled, “What can I turn plastic into?” and that’s how the whole thing got started.

Waste360: Can you share how much plastic you’ve diverted from landfills and oceans so far?

Rosenberger: This year we will divert our 100 millionth bottle. And, because of the jobs and revenue people are earning, I think we’re up around $6-7 million dollars going into the communities we serve—which totals about 3,000 people. And I like to think we’re just getting started. We’re in Haiti, Honduras, and Taiwan with direct supply chains. And we’re also in Bangladesh, India, Vietnam, Indonesia, and we expect to be in the Philippines this year. 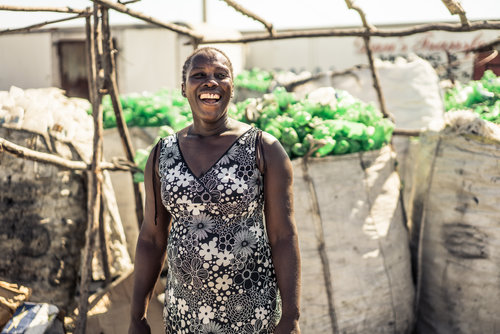 Waste360: How has COVID-19 affected what you’re doing in your supply chain and changed the way you’re leading?

Rosenberger: In every way. COVID has been the ultimate roadblock. Haiti and the other countries we serve…they are serious about containing the virus, but their infrastructures create huge challenges. As far as leadership, I’m still learning. I played it wrong at first—focusing on staying above water, getting access to loans, etc. It was easy to forget about the people who were lonely and scared. We made a transition and now have made 80,000 face shields, and we’ll have 125,000 facemasks coming out of the marketplace over the summer. We have to remember, “At what expense?” Like most leaders, we get some of it right, and a lot of it wrong but hope the good outweighs the bad.

Hear what he thinks about solving the plastics crisis in our lifetime, the role of waste and recycling and more by listening above.