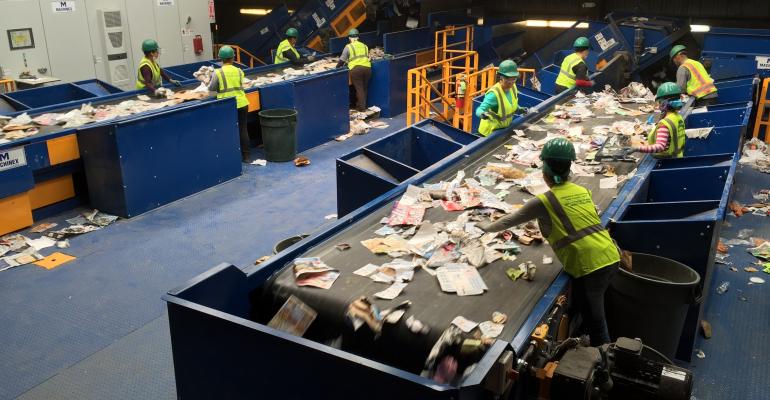 In a multipart series this week, Waste360 will examine some of the latest technologies under development and the implications their adoption will have for the industry at large.

The scene is like what you’d see in most any materials recycling facility (MRF): A stream of recyclables comes barreling down a conveyer belt to be separated and diverted to the proper processing areas before being baled and shipped.

But what’s different here is it’s not just human eyes and hands operating the sorting system. Instead, robotic arms dart quickly over the belt picking up objects and tossing them into the right bunkers. The process is guided by cameras and computers capable of quickly identifying and sorting materials and objects of all sorts.

Elsewhere, an automated side-loader refuse and recycling truck completes its route. It pulls up to a residence and an arm extends from the truck, grabs the cart and dumps its contents into the back of the truck. Sitting at the driver’s wheel is no one at all. The truck’s route has been programmed to allow the truck to complete its route on its own.

These are not scenes of some far-flung future; these are technologies that are being piloted and tested right now. The big questions facing the waste and recycling industry include whether these technologies are viable and, if so, what their implementation will mean for the industry’s sprawling workforce.

“Waste treatment, including MRFs, will be completely reshaped by the evolution of artificial intelligence (AI), advanced sensors and robotics,” says International Solid Waste Association President Antonis Mavropoulos. “At first, it’s obvious that manual sorting will be completely wiped out, maybe in less than five to six years. Second, powered by AI and new sensors, robots will be able to separate much more fractions, with much less impurities. Third, the separation process will become faster and more cost effective, with easy adaptations to changes of the input waste.”

These technologies are just beginning to be tested in the waste industry and other industries like trucking and manufacturing, but some companies have already seen improvements in operations, safety and the quality of materials.

In a multipart series this week, Waste360 will examine some of the latest technologies under development and the implications their adoption will have for the industry at large. Part One examines the use of robotics at MRFs. Part Two looks at what’s happening with driverless trucks and the use of technology to increase industry safety. And Part Three talks about the long-term implications of these trends.

In an effort to increase recycling efficiency and reduce contamination, waste and recycling companies across the globe are starting to partner with manufacturers to test out robotics and AI technologies for the sorting of materials.

In late March, the Carton Council of North America joined forces with Alpine Waste & Recycling and AMP Robotics to test the use of AI to improve the recycling of food and beverage cartons. Alpine installed AMP Robotics’ AMP Cortex robotic sorter in its facility to test out its sorting functionality. AMP Cortex sorts materials via spider-like arms with grippers and utilizes visible-light cameras to feed images to a computer that uses advanced machine learning algorithms to recognize items on the facility’s conveyor belt. It currently runs about 16 hours per day and has a grab rate of 60 picks per minute, which is higher than a human’s average of 40 picks per minute. “Right now, we are focused on getting the system to learn the materials that are traveling underneath it,” says Brent Hildebrand, vice president of recycling with Alpine Waste & Recycling. “It has been fun to watch how the robot learns more materials and how it gets better at sorting the materials. Long term, I think the robot will help efficiencies at facilities like ours. Alpine is innovative when it comes to utilizing different technologies like this one, and I hope that it will help our operations and other operations across the country become more efficient at diverting more materials from landfill in the future.”

One of the things that Alpine is looking at with the AMP Cortex is how it’s compiling data of all the materials that are traveling underneath it. While the company’s main focus right now is cartons, it hopes to receive some valuable data about other materials once AMP Robotics makes the full data function available. “Even though the robot is only sorting one material right now, it’s collecting data from every material that passes through it,” says AMP Robotics Founder Matanya Horowitz. “In addition to acting as a sorter, the robot serves as a continuous waste characterization. As the robot watches the waste stream, it learns with experience and becomes smarter over time. As it becomes smarter, the accuracies continue to go up and the sorting process continues to improve. We are in the beginning stages of this robotic technology, but accuracies above 98 percent will soon become the standard with these robotics.”

Another notable partnership is between ZenRobotics and Recon Services Inc., which have come together to bring the ZenRobotics Recycler from Finland to the U.S. The ZenRobotics Recycler, which is currently installed at Recon’s construction and demolition (C&D) recycling facility in the U.S., reclaims materials from waste via advanced machine learning technology, sorting materials like metal, wood and stone fractions.

“Creating a computer capable of understanding a wide variety of materials and objects that come in all shapes and sizes was challenging,” says ZenRobotics CEO Timo Taalas. “After we tested the system in the lab and got it to work, it took a lot of work to make it successful in the first production system and other facilities after that. We now have a system that reads and scans the material as it travels on the conveyor belt and uses robot arms to pick up objects and place them into sorting bunkers, but I think people often underestimate the time it takes from the first marketing video to pushing it through to full production. We learned that the hard way.”

In addition to its launch in the U.S., ZenRobotics is partnering with Jiangsu LVHE Environmental Technology Co., Ltd., on the first robotic C&D waste recycling facility in China. The first units, which aim to help reduce the country’s massive quantities multiple waste categories, are scheduled to be installed this summer.

Taalas believes that robotic technology will make a big change in MRFs because robots are built for heavy 24/7 operations, and they are good at sorting multiple waste fractions in one spot, which makes the cost of installation lower. He also notes that since robots are software controlled, they provide a great amount of flexibility.

“Robots create high-quality, pure recyclable material and make it possible to recycle materials that may not have been able to be recycled in the past,” comments Taalas.

Bulk Handling Systems (BHS) is the latest manufacturer to create a robotic sorting technology. Max-AI technology, an artificial intelligence that identifies recyclables and other items for recovery, has two immediate solutions: the Max-AI Vision System and the Max-AI Autonomous Quality Control (AQC) unit. The vision system provides information, and the AQC unit adds a robotic sorter to pick out and place up to six different materials from the conveyor belt into sorting chutes.

Max-AI is in operation at Athens Services’ MRF in Sun Valley, Calif., where it’s helping to identify and separate polyethylene terephthalate (PET), leaving a clean stream of clear PET on the conveyor belt.

“Athens is using Max-AI to remove PET thermoform trays from recovered PET, which provides the company with a significant improvement in its sale price for PET bales,” says BHS Director of Product Management Brian Wells. “Compared to its previous manual sorting, Max-AI is providing Athens with cleaner bales of material and is able to sustain that performance through every hour of each shift. Within a few days of commissioning, Max-AI was already achieving higher quality than the MRF had been capable of producing previously.”

The Max-AI technology is part of BHS’ plan to bring autonomous optimization to other MRFs in the near future to increase performance and profitability.

“As we launch additional products from the Max-AI platform, MRFs will become more and more autonomous,” says Wells. “In the near future, you will see us building container lines with no human sorters, and that’s going to evolve into a new generation of recycling plants that won’t require any human contact with waste. These AI-enabled plants will be able to operate around the clock without stopping for employee breaks, which will significantly increase recycling capacity while offering our customers a safer and more consistent production operation.”

Knowing the needs and wants of the industry, robotic technology manufacturers are working to make detection and sorting of dangerous objects a reality.

“We are hoping to have robots detect dangerous objects like roadkill, diapers and needles and provide warnings for the human sorters,” says Horowitz. “It’s not a feature yet, but we hope to make it one in the future to further improve safety in the workplace.”