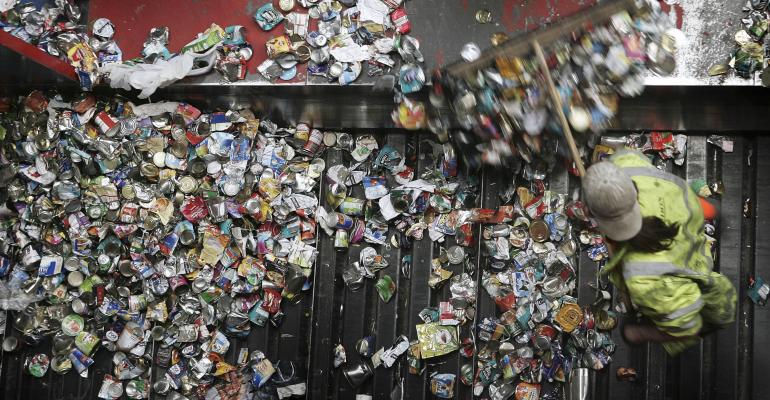 The Northeast Recycling Council (NERC) has published the third in a series of quarterly reports on the blended value of a ton of materials marketed at materials recovery facilities (MRFs) in its region. The latest report reveals increasing levels of contamination within the recycling stream, leading to higher processing costs for MRFs.

“One of the catalysts for doing this study originally was to try to show municipal residential recycling programs that it really does cost something to recycle,” explains Lynn Rubinstein, NERC executive director.

She adds that the point has been to highlight some of the anxieties that communities have had about MRFs pushing back and rejecting loads or charging contamination fees to meet more stringent bale specifications.

“It’s not just that China imposed these requirements,” she says. “It’s that any domestic market imposed stricter specifications as well, and that costs money.”

An additional MRF participated in this latest survey, bringing the number of participating MRFs from around the region to 15. The new addition is the first privately owned MRF data incorporated into the report.

The latest report reveals some interesting trends, according to NERC:

Indirectly, NERC was interested in seeing whether there was a noticeable improvement in the quality of what residents were putting in their recycling containers. Rubinstein says that wasn’t the case.

“If we look at the report we just published, we see that the weighted average percentage of a ton received is 14 percent. Whereas in the previous quarter, it was 12 percent. That, from my perspective, is a significant decline in quality,” she points out. “My simple reading of this is that we’re seeing more garbage than we received the previous quarter.”

The report also revealed that processing costs in the region are on the rise.

“To me, that was the most interesting. I felt it was a really big jump in the cost to process,” notes Rubinstein. “When you pair that with the approximately 2 percent increase in the amount of contamination in the ton, that makes total sense to me.”

Rubinstein fears that negative messaging about recycling in the mainstream media and the various signals that residents receive about recycling confuses and demoralizes people.

“I continue to hear professionals in the recycling community bemoan the various signals that the residential population receives about what is recyclable and in what way they need to prepare things for recycling. This ongoing variety in messaging confuses people and makes them believe there is no way to do the right thing. Or they are just tired of all the different information,” she says.

NERC’s survey will be repeated for the quarter spanning January through March, and NERC says it anticipates expanding the number of MRFs participating in the survey.