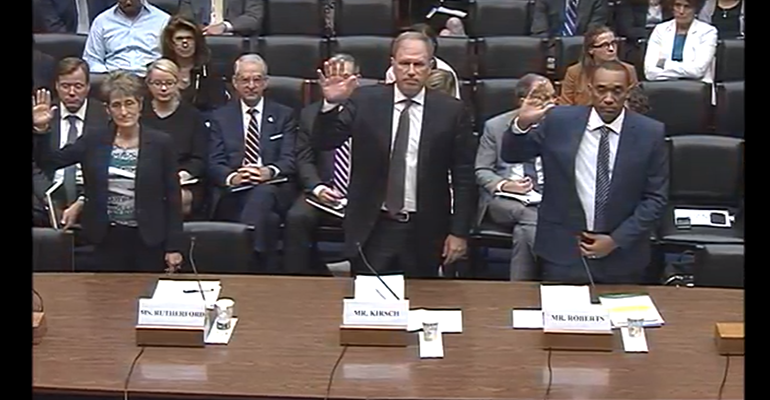 Tensions ran high as U.S. lawmakers pressed major corporations about their alleged role in concealing the harmful health impacts of per- and polyfluoroalkyl substances (PFAS) from consumers and the U.S. Environmental Protection Agency (EPA) over the past five decades or so.

The House Subcommittee on Environment held its third hearing, “The Devil They Knew: PFAS Contamination and the Need for Corporate Accountability, Part III,” on September 10 focusing on the dangers of PFAS chemicals and the role of industry in contaminating Americans’ drinking water, groundwater, air and food supplies with these chemical compounds.

Before lawmakers pressed representatives from three major corporations—DuPont, 3M and Chemours—for their companies’ roles in what is now being touted as a “national crisis,” former Minnesota Attorney General Lori Swanson testified that 3M had known about the health dangers of PFAS chemicals since the 1950s and actively concealed that information from consumers and the EPA. Swanson led a massive case against the 3M Company on behalf of the state of Minnesota for the company’s role in damaging the environment with two of the most now well-known PFAS chemicals, perfluorooctane sulfonate (PFOS) and perfluorooctanoic acid (PFOA), which have been linked to serious, adverse health outcomes in humans.

After eight years of litigation, 3M settled the case with the state of Minnesota last year for $850 million. That money will be used to clean up the sites that have contaminated Minnesota residents.

The subcommittee’s second witness, Rob Bilott, an attorney who has represented people effected by PFAS contamination, detailed what DuPont knew about the health risks associated with PFAS for decades and the company’s efforts to conceal that information from the public. Bilott was one of the first attorneys to successfully sue DuPont on behalf of people who have been exposed to PFAS chemicals and have suffered as a result. Bilott represented Bucky Bailey, a witness at the subcommittee’s July 24 hearing, who also was featured in the recently released documentary on Netflix titled “The Devil We Know.”

In 2017, DuPont and its spin-off company, Chemours, agreed to pay $671 million for polluting the area around a DuPont manufacturing plant in Parkersburg, W.Va.—the same plant where Bailey’s mother was allegedly poisoned by PFAS when she was pregnant with him.

PFAS chemicals have been linked to low fertility, birth defects, suppression of the immune system, thyroid disease and cancer. The EPA has issued a health advisory on PFOA and PFOS and is currently in the process of determining how these chemicals should be regulated.

“The current assistant administrator for the Office of Water at the EPA, David Ross, agreed that PFAS contamination was, quote, a ‘national emergency,’” said Subcommittee Chairman Harley Rouda during the September 10 hearing. “Several states have already taken steps to regulate these chemicals on their own. My point is, this is not a small or emerging or ambiguous problem—it is a full-blown crisis that our government has already acknowledged. So, our goal here today is to demand accountability for this crisis.”

Based on testimonies from the first panel of witnesses, as early as the 1950s, in-house scientists at 3M and DuPont began discovering that PFAS chemicals were bioaccumulative—meaning they build up in the body, justifying their nickname “forever chemicals”—and toxic.

“And yet, despite the consensus among scientists within both companies, DuPont and 3M continued to deny the toxicity of long-chain PFAS chemicals,” added Rouda. “The subcommittee plans on using the information learned to press these companies to admit that they know these chemicals are toxic and to acknowledge their past conduct of concealing important scientific studies regarding PFAS toxicity. We will also urge them to work together with Congress to address this national emergency, which includes designating PFAS as a hazardous substance under the [EPA’s] Superfund Law.

Rouda also noted that the subcommittee doesn’t accept that changes in corporate structure let the current incarnation of DuPont and Chemours off the hook.

“A company is tied to its past, morally responsible for its past and must answer for its past, no matter what changes have occurred from point A to point B—in the same way a nation must contend with and be responsible for actions taken decades ago even though there have been changes in government and leadership since then,” he said.

“It’s 2019, and these chemicals are killing people,” added Rouda. “Let’s stop using them, and let’s get them out of our environment. I call on each company here today to come to the table and work with Congress and the EPA to address this national emergency. The lives of each and every American depend on it.”

Testimonies from 3M, DuPont and Chemours

Despite decades of research from its own scientists that linked PFAS chemicals to negative health consequences, 3M’s Senior Vice President of Corporate Affairs Denise Rutherford testified during the hearing that there is “no cause and effect” between PFAS chemicals and adverse health impacts.

Rutherford, who has been with the company for 30-plus years, noted that 3M began phasing out the production of PFOA and PFOS compounds in 2000. Although 3M found these compounds in the environment where “we didn’t think they would find them,” according to Rutherford, and phased out their production, the company maintained there is no scientific-based data revealing adverse health effects.

After this article was published, 3M reached out to Waste360 to point out that the above statement regarding the company's research is “simply not accurate.”

“The weight of scientific research, including our own, over decades does not show that PFOA or PFOA causes harm to people at current or past levels,” according to 3M. “Despite what some subcommittee members may falsely claim about the history of 3M’s research, Denise [Rutherford] made clear in her testimony that this claim is not true and that our studies, among many other third-party studies, show inconsistencies in the research. This is why 3M, along with the [Centers for Disease Control’s] Agency for Toxic Substances and Disease Registry, the Michigan Science Panel and the Australian PFAS Expert Health Panel have all said that the science has not shown causation.”

“There are a lot of inconsistencies in the data," added Rutherford. "We accept that there are associations which are like leads, places that we should continue to look. And, we are, in fact, doing that. But when we look at that evidence there's no cause and effect for adverse human health effects at the level we are exposed to as a general population.”

Kirsch did, however, point the finger at DuPont, saying Chemours couldn’t be held accountable or “take control of the decisions or actions made from people in the past.”

Roberts testified that “the new DuPont” appreciates the opportunity to endorse specific legislative efforts. He referred to the company as the new DuPont since its performance chemicals business in 2015 became a separate entity (Chemours).

“With respect to Chemours, no one wants to hear two companies argue about litigation,” said Roberts. “We want to work with Congress, and that’s what the new DuPont is here for.”

He said the new DuPont will limit its production of long-chain PFAS compounds by the end of this year and will cease the production of all PFAS firefighting foams at its facilities by 2021. He added that DuPont intends to provide research funding for PFAS remediation efforts.

After being pressed for roughly two hours by lawmakers, ultimately, by the end of the hearing, DuPont, 3M and Chemours all refused to commit to compensate victims who have been harmed by PFAS chemicals.

Rep. Deborah Wasserman Schultz noted instances of servicemen and women being negatively impacted by the effects of certain PFAS compounds and asked—multiple times—the three corporate representatives whether they agree that legacy PFAS chemicals like PFOA and PFOS should be designated under the Superfund Law, as well as whether the companies should be held accountable for paying for remediation efforts.

Rutherford and Kirsch, who backpedaled a bit eventually said, not at this time. While Roberts said DuPont believes that PFOA and PFOS should be designated as hazardous substances under the Superfund Law.

“To those of you who have not answered or said no, you are contributing to this national emergency and you have sickened our first responders and our military, and I don’t know how you sleep at night,” concluded Wasserman Schultz.