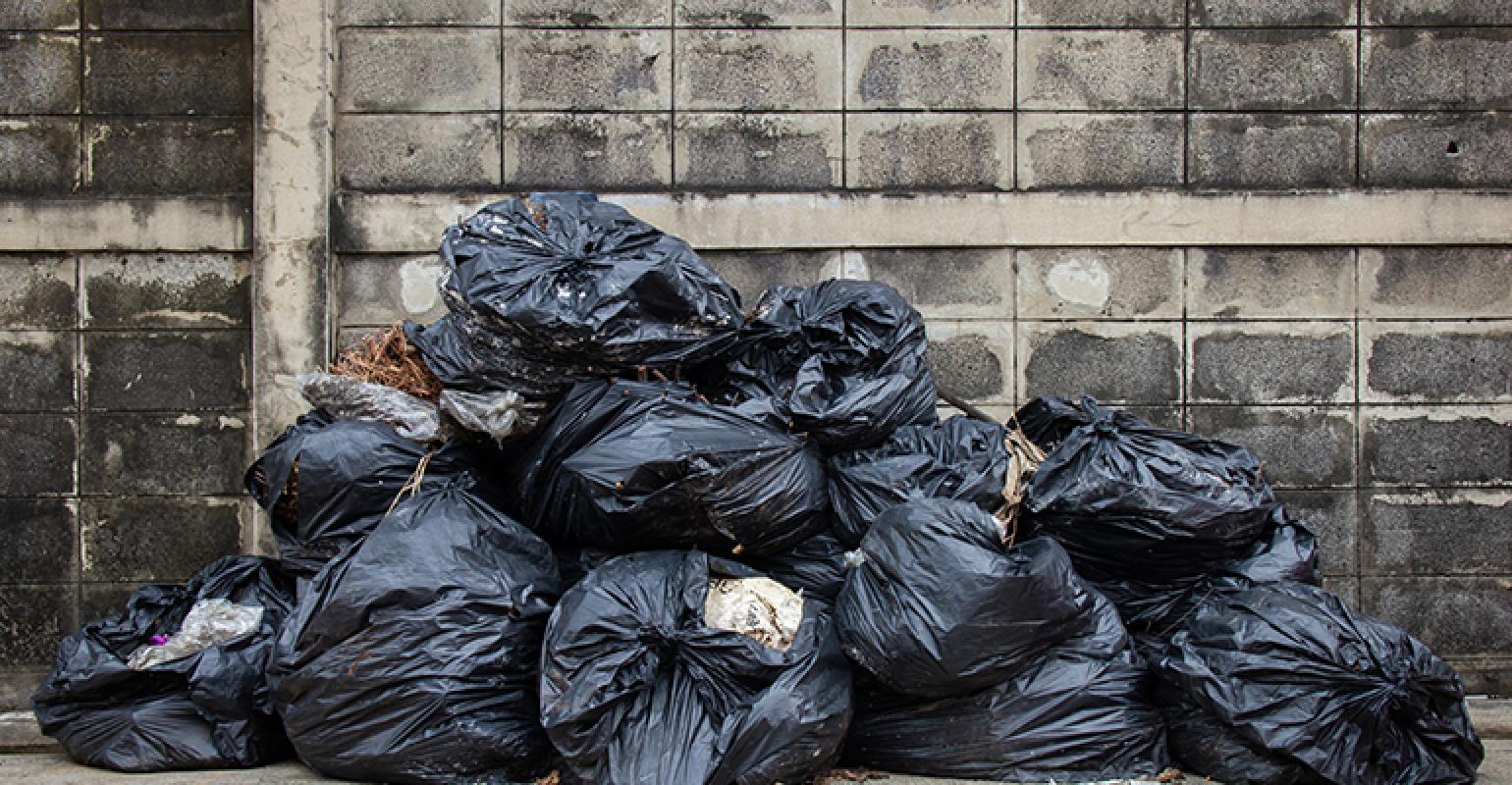 America’s thirst for consumption is not matched by an appetite for recycling, reveals a new index identifying the country as the world’s top producer of waste and one of the worst of any industrialized nation for managing its trash.

In two new studies, London-based global risk analytics company Verisk Maplecroft measured the waste generation and recycling performance of 194 countries to uncover a global picture of how countries are dealing with the waste they produce at a time where the world is facing a mounting crisis, primarily driven by plastics.

Verisk Maplecroft’s Waste Generation Index (WGI), which captures per capita rates of MSW, plastic, food and hazardous waste production, shows that U.S. citizens and businesses are the largest contributors to the waste problem across the four indicators measured. At 773 kilograms (kgs) per head, the country generates 12 percent of global MSW, approximately 239 million tonnes, while accounting for just 4 percent of the world’s population. 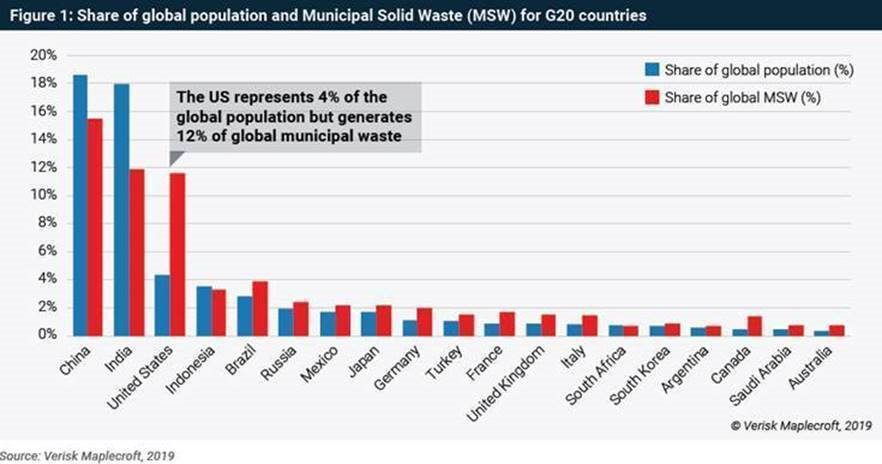 In contrast, China and India make up more than 36 percent of the global population but generate 27 percent of global municipal waste. American citizens produce more than three times as much waste as their Chinese counterparts and seven times more than the people of Ethiopia, the lowest-risk country in the index.

The U.S. is not alone though. Highly developed European and North American countries are disproportionately responsible for the highest levels of waste generation. The highest risk countries in the Waste Generation Index feature the U.S., the Netherlands, Canada, Austria, Switzerland, Germany, France and Australia.

The U.K. ranks 14th in the WGI, with its residents generating 482 kgs of household waste each per year.

The index shows that the U.S. falls well behind other industrialized nations. The country recycles only 35 percent of its MSW. In comparison, Germany, which has the world’s most efficient record on waste management according to the REI, recycles 68 percent of MSW.

Recycling progress in the U.K. has stalled for the best part of a decade. While it is the seventh best performing country in the REI globally, it still has a recycling rate of only 44 percent.

In the visual below, it is evident that many developing economies do not have the resources to recycle efficiently, while the United States is shown as a laggard on the global stage.

“The U.S. is the only developed nation whose waste generation outstrips its ability to recycle, underscoring a shortage of political will and investment in infrastructure,” according to the REI. “The country’s seeming lack of resolve to deal with waste domestically may become a mounting problem in the face of plastics import bans from China and many developing countries, where the U.S. currently exports a large proportion of its plastic waste.” 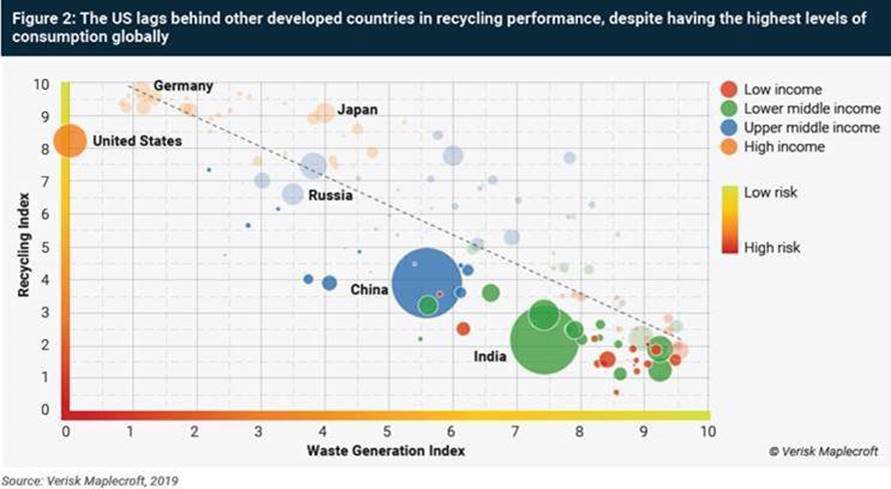 China, Thailand, Vietnam and Malaysia have all banned, or are set to ban, imports of solid waste, including a host of plastics. Additionally, in May, almost all the world, with the notable exception of the U.S., agreed to restrict shipments of hard-to-recycle plastic waste to developing nations.

These emerging shifts in policy are going to make it all the harder for countries such as the U.S. that are underperforming in relation to recycling.

The world is also witnessing a rising number of international incidents between developing and developed nations over waste shipments. Most notably, tensions have risen considerably between Canada and the Philippines’ government, which has sent 69 shipping containers of waste back to Vancouver after a diplomatic spat escalated over imports of trash.

“With the world’s attention firmly fixed on the problem of waste, we expect governments to act, with businesses footing the bill,” said Niall Smith, senior environmental analyst at Verisk Maplecroft, in a statement. “Beyond the potential financial impacts, the reputational risks for business are high if they ignore intensifying interest in the issue from consumers and investors.”

Using data from its suite of waste indices, Verisk Maplecroft identifies the Netherlands, the U.S. and the U.K. as the most likely countries to pass new regulations on plastic materials that could hit companies in the pocket. But, France, Canada, Australia and Belgium are also flagged as jurisdictions to watch.

“It’s going to be vital for companies to get ahead of these issues,” added Smith. “Investing in circular economy measures can not only mitigate risk but can open up new markets and improve brand reputation.”