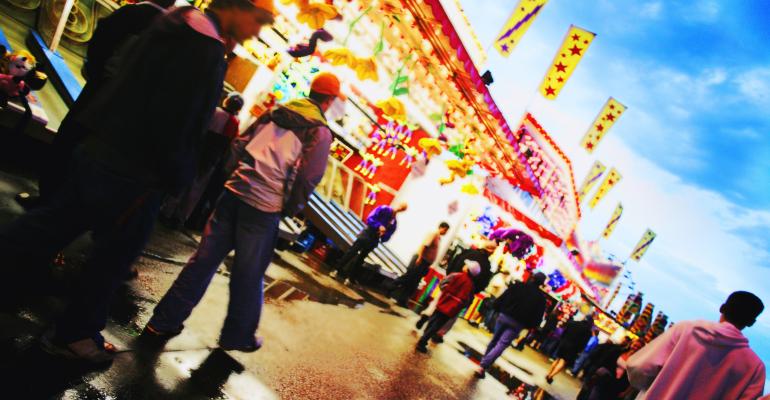 The sources of bad practices and associated cost overruns are relatively the same for all state fairs.

Few things are as All-American as a state fair. Complete with prize-worthy livestock and apple pies, state fairs stir the Yankee Doodle Dandy in our hearts. Whether your home is in Manhattan, Eureka Springs, Calif., or chances are, halfway down the midway, the inner good ole boy or gal in you will surface.

Maybe it’s the pure nostalgia and tradition that attracts us. Americans have been attending state fairs, since the first one opened in Syracuse, N.Y. in 1841. Perhaps it’s the opportunity—if only for one day—to leave our workmates behind for the company of a few Leghorns and Rhode Island Reds. If fair promoters are right, the one universal appeal is the freedom to wander from one food truck to another, sampling deep-fried delicacies with reckless abandon.

Regardless of the draw, it’s safe to say that state fairs have become big business, but not necessarily profitable. In fact, throughout the last decade, the survivability of state fairs was questioned and their wastefulness condemned. Traditionally, state fairs were run by quasi-government boards or authorities. Most were reliant on state appropriations, some in the millions.

The sources of bad practices and associated cost overruns are relatively the same for all state fairs. Gone unchecked these conditions eventually changed the framework of many state fairs. Subsidies waned. Some fairs closed. Desperate for revenues, many state fairs privatized, abandoning their agricultural and educational roots in exchange for a total carnival atmosphere. There were also those who took a more promising route.

A few fair organizers made correcting the problems a priority. They survived by addressing certain expenditures, which were once overlooked or blindly accepted. The findings were enough to make fair organizers look at resource conservation and waste reduction as serious means to control costs. Their events have evolved into highly lucrative affairs, run independently of state subsidies or political interference. State legislators should incentivize fair administrators still dependent on financial support to follow suit.

The Heart of the Problem

As one might suspect, waste generated onsite presents both an environmental concern, as well as a key expense. It’s also one that can be resolved with planning, communication and cooperation. The basic solutions to reducing and managing event waste are well documented. Recycling, composting of organics and diversion of animal waste for fertilizer all work in conjunction with one another. Controlling the upfront choices made by food concessionaires and the distribution of unused but consumable food can have an equally positive effect. These methods are now commonplace at fairs large and small. Better yet, implementation is more effective.

Energy consumption tops the list of challenges most difficult to curtail. It is expected and taken for granted by fair participants.

Strings of lights and neon signs create the fair’s unique ambience, beckoning us to ride, eat, play and win. Who, where and why energy is used is worth tracking and evaluating on an ongoing basis. Electricity dependent concessionaires park and plug in for the duration of the event. Unless directed otherwise, energy guzzling amusement rides and concessions remain lit around the clock to enhance their appearance. In the livestock area, there are misters and fans to provide creature comforts. Major refrigeration needs exist throughout the grounds. Solar panels were introduced to reduce some part of the costs in Nebraska, Washington and Minnesota.

Remember all those deep-fried foods? Used oil can fuel biodiesel generators and onsite vehicles. The 2016 Nebraska State Fair claims 900 gallons of used fryer oil were converted to biodiesel during the event. The Minnesota State Fair has investigated the feasibility of converting all organic waste to energy via an anaerobic digester.

Transitioning to a “sustainable fair” takes considerable effort, but the rewards are twofold. People have always attended fairs expecting to see inventions and innovative ideas they could adapt at home or on the job. State fairs originally were created to showcase best practices and accomplishments in farming and rural homemaking, hoping this exposure would push state agricultural production higher and in turn improve the quality of life. Aside from reducing overhead, incorporating sustainable practices into state fairs stays true to their core mission. Creating awareness about social issues does too.

Today, less than 2 percent of Americans are involved in farming as a sole source of income. Nevertheless, state fairs still attract attendees in growing numbers. The Iowa State Fair is a perfect example. Launched in 1854, it had a budget of $323. By 2014, Iowa ranked as the fifth largest state fair, when it attracted more than one million visitors and according to a state audit generated operating revenue exceeding $20 million.

In first place, the Texas State Fair far exceeds all others. The Texas Fair Authority reported its recent attendance had swelled to 2.5 million people. Their post-fair press release estimates revenue for the 2016 event at $56 million.

The results are no accident. Today, fair organizers have the same basic objectives as their predecessors, but with a new spin. Retaining and growing attendees requires careful attention to societal changes. As fair boards learn the benefits of sustainability in their own operations it trickles down through the attendee experience.

By reaching out to a new generation on their terms to ensure the fair tradition, modern fair organizers have achieved more than boosting the bottom line. It’s possible that the survivability of our state fairs can have a profound influence on the sustainability of our communities, urban and rural.

Sustainable state fairs continue to make advancements beyond the barn. Fairs are perfect venues to grow public acceptance for new social norms. Their longstanding reputations can lend credibility to any cause. A great example is the Illinois State Fair, which has supported an inmate reentry program that teaches green job skills by providing waste and recycling management at the fair. The Tulsa (Okla.) Fair offers an Autism Friendly event

In addition to educating attendees about how food gets to their table, fairs now target a broader demographic with leading -edge concepts designed to teach people how to reduce their personal carbon footprint. The Ohio State Fair reinforces the importance of careers in STEM through hands on youth competition and on-site activities. The Texas State Fair provides a guidebook to help teachers walk students through a waste audit on the fairgrounds. In a twist on traditional crop production, the Oregon State Fair introduced open minded agriculturalists to the proper methods of cultivating newly legalized marijuana. The Eco Experience at the Minnesota State Fair features environmentally friendly products.

Do yourself a favor this summer or fall. Experience a state fair from the grandstands to the 4-H barns to the drone demonstrations. It just might lead to the beginning of “sustainable you.”