Waste Company is First to Inject Biogas into California Pipeline 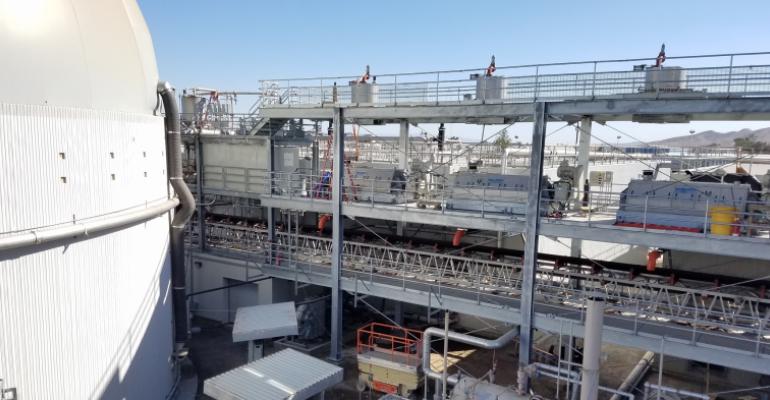 Organic waste will be converted to biogas at the company’s anaerobic digestion plant, and then the gas will be further refined and distributed through SoCalGas’s pipeline.

Waste management company CR&R Environmental has launched the first commercial-scale California operation to produce renewable natural gas (RNG) for injection into that state’s pipeline. And there are other “firsts” associated with the $55 million project.

Predominantly privately financed with some state funding, the Stanton, Calif.-based company’s project converts organic waste to biogas at its Perris, Calif., anaerobic digestion (AD) plant. The gas will be further refined and distributed through SoCalGas’ pipeline.

Sourced primarily from green waste and some food waste from 15 cities, the RNG fuels 90 of the companies refuse trucks; however, future plans are to run the entire 900-truck fleet on this renewable gas.

“Cities that contract with us see their grass clippings and food waste come back to them as an ultra-clean fuel that powers the trucks that run in their communities,” says Paul Relis, senior vice president of CR&R. “So, we cut both C02 [carbon dioxide] and smog emissions in their neighborhoods. And we are in a nonattainment air district [district that doesn’t meet federal air quality standards]. So, this is one measure to especially reduce emissions in these problematic areas.”

The company has filed for a carbon negative 70-plus classification. It’s a decision it made after capturing data to be able to argue for this higher classification, which would ultimately mean higher compensation under the low-carbon fuel standard.

While the current plan is to use the fuel exclusively in its own operations, leveraging the pipeline made sense from both a distribution and storage standpoint.

“We operate in many locations across Southern California, some of which are far apart, so by injecting into the pipeline, we can distribute to our multiple fuel stations. And we can store what we don’t use without huge containers that would be prohibitively expensive,” explains Relis.

CR&R has been awarded $7 million since 2014 from the California Department of Resources Recycling and Recovery (CalRecycle) via its Greenhouse Gas Reduction Grants program, which is funded through the state’s Cap-and-Trade program.

“These California climate investments help expand the infrastructure we need to achieve the state’s important environmental goals,” says Mark Oldfield, communications director for CalRecycle. “Projects like this one help close the loop with organics by keeping material out of landfills and transforming them into valuable new products, which will help create jobs and reduce greenhouse gas emissions that contribute to climate change.”

CR&R’s endeavor was a guinea pig project of sorts. It leveraged the established New Zealand Greenlane biogas clean up system but added a Portuguese system to produce a cleaner gas. This is the first time the latter technology has been used in North America, according to Relis, who says supplementing with the Portuguese system is how the company met California’s pipeline quality fuel mandate of 99 BTUs (British thermal units).

“We have folks visit from China, South Korea, Vietnam, the Philippines, France and other countries as well as from all over the U.S. They are reporting they have nothing that’s this technologically sophisticated,” says Relis.

While organic waste will be converted to clean fuel, solids left from the AD process will be used to make other products. It is being composted with green waste and purchased by major soil product producers for soil enrichment commodities.

The project was attractive to SoCalGas, which recently announced it will streamline processes to support RNG projects. It also developed a RNG gas toolkit for producers and developers wanting to interconnect to the pipeline.

The utility’s interests are in addressing climate change through reduced emissions while helping contain energy costs.

“Moving forward, California state policy will drive more of this type of project. Senate Bill 1383 calls for a 75 percent reduction in disposal of organic waste from the 2014 level by 2025. It’s estimated that this legislation will drive anywhere from 40 to 75 new projects similar to CR&R’s,” she says.

The California Energy Commission is among CR&R’s backers. The agency’s commissioner, Janea Scott, said in a statement, "There are multiple pathways to reduce and eliminate pollution from our transportation sector. The Energy Commission is pleased to invest in projects like CR&R's anaerobic digestion facility to help demonstrate one of these pathways and to grow in-state production of low-carbon transportation fuels."