Food processing facilities aggressively work to ensure their food wastes are recovered for composting or other applications not sent to disposal facilities. In addition, edible food can be diverted from retailers and other sources and sent to food banks to feed the hungry. EPA MSW data does not include either option. However, more than 15 million tons of food waste are diverted by food processing facilities and perhaps as much as 3 million tons are diverted as edible food.

Curbside collection of food waste composting is found in 198 American communities. Two-thirds of those programs are in three West Coast states. Large scale projects in Seattle and San Francisco are showing how to collect and compost food waste effectively, but cost, facility siting and vector control are concerns for new projects.

Anaerobic digestion facilities convert biomass, such as food waste, to energy under oxygen-free conditions. They produce a biogas, which can be turned into an energy source, and a digestate, which can be composted. The number of facilities that accept food waste is small but growing.

Over 60 million homes and 500,000 businesses have in-sink food disposers that divert food waste from landfills. 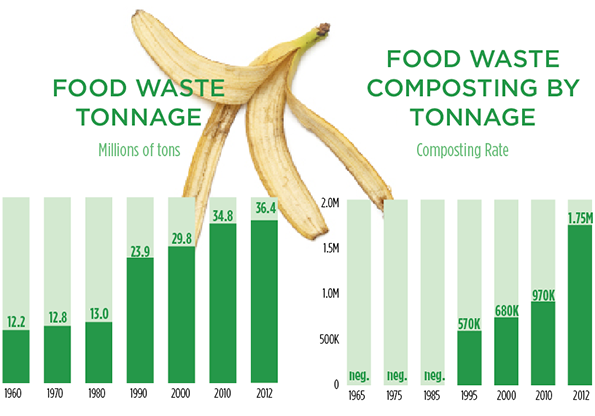