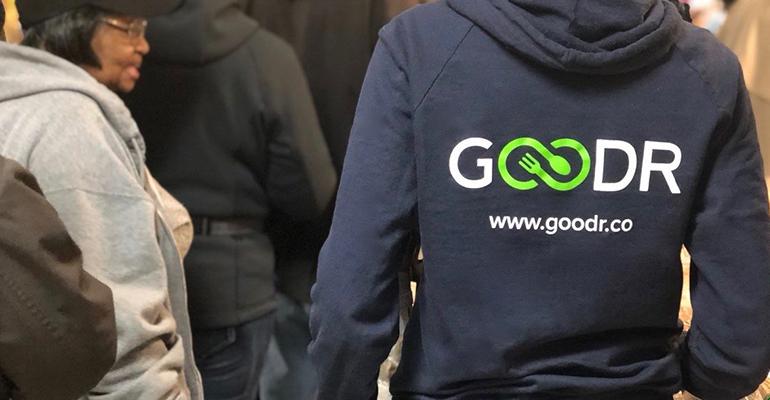 They never know from where their next meal is coming, and they often have to make critical choices such as choosing between paying bills or paying for food. Meanwhile, more than 80 billion pounds of food rots in landfills, much of it from consumer-facing businesses.

Jasmine Crowe recognized that these two issues were interconnected, and diverting food waste to those in need was achievable with the use of emerging technology.

"This is really why I started Goodr," she said. "What I began to see is that hunger is not an issue of scarcity it's really a matter of logistics."

When they began asking concessionaires what the traditional process was for calculating waste, Crowe found that most of the restaurants' employees were writing down leftovers on a receipt. The receipt would be handed to a manager who then was supposed to enter it into a system for all of the restaurants.

Shortly after the program's launch, Crowe also found that scaling the app throughout the airport was difficult as not all of the employees had cell phones. The answer was integrating the technology into point-of-sales systems. thereby making it easier for concessionaires to participate. The solution took the program to a new level and solidified a successful collaboration that continues to today.

"Since we started the program in 2018, we've done about 130,000 or more meals to the local nonprofits," Jones said. "That's a big deal. The community is food insecure as we identified, and if we can find a way to provide for our community as a member of the community in so many ways, not just passengers."

The mutually beneficial partnership has now thrived for five years. Crowe pointed to a case study that Goodr completed in January 2019 that was completed over the course of six months. During that time, food waste was reduced by 47%, and concessionaires were able to claim tax deductions of more than $200,000. Goodr and the Hartfield-Jackson International Aiport diverted more than 85,000 pounds of surplus food from landfill and converted it into at 2000 meals for the local Atlanta community.

"Food waste has been happening and people have been doing food donations, but they never were measuring or managing how they were donating their food," Crowe said. "One of the things that we always say is you can't manage what you don't measure."

Goodr's app allows concessionaires at the airport to click on the items they have to donate and to request pick up. By doing this, both parties have the capability to track what food is available, the assigned tax value of the items and also who the final recipient is in a real-time format.

Crowe explained that, "for every pound of food we keep out of landfill, this means CO2 emissions savings, water savings, labor savings and more."

"This is not a feel good story," Jones said. "This is an impact story because with employees, you do anything to boost morale. If you're contributing to somebody off in the same situation or worse, you can actually brighten their day by what handing them some food. That goes a long way because they are a part of your community. You will see them in the streets again."

Watch the full discussion on-demand at WasteExpo Together Online.