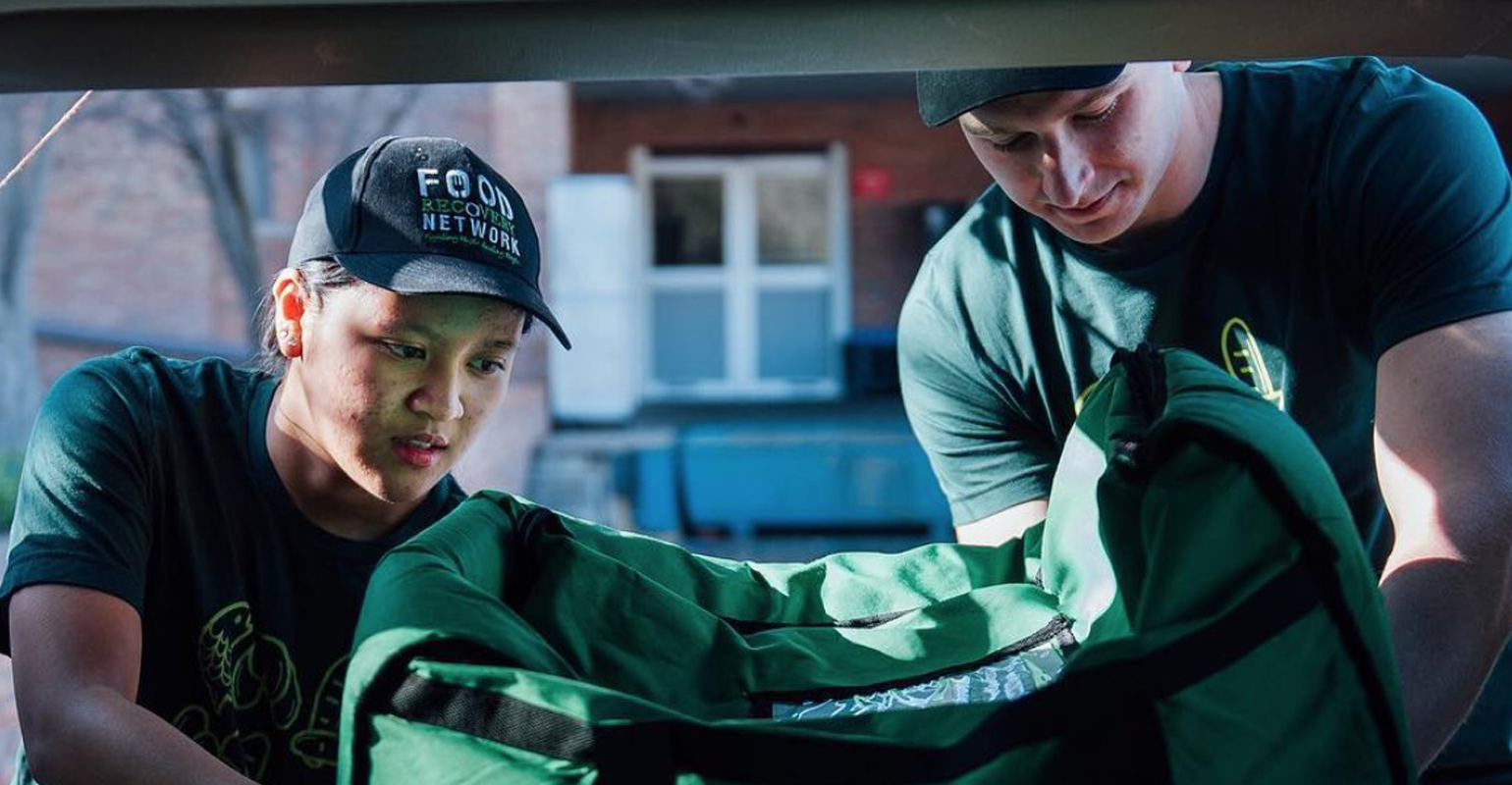 Ten years ago, a few college students at the University of Maryland became keenly aware that huge volumes of untouched, perfectly good dining hall food was getting tossed in the trash, and they teamed up to do something about it. They packed up as much as they could and toted it by carloads to a soup kitchen, a church and other places in their community where they already volunteered.

Then the friends called more friends—a couple of them at Brown University in Rhode Island, and others at Berkeley and Pomona in California and got them to do the same in their communities. They grew their scheme bigger with help from a Maryland University professor, founding the Food Recovery Network (FRN), which today is the largest student-run, hunger- and food waste-fighting organization in the country. It’s powered by 180 colleges, with paid staff who work from a national office to recruit more college participants. They collectively get food to 350 nonprofits across the country including food banks, pantries, homeless and domestic violence shelters, after-school programs among others. They’ve recovered over 4.2 million pounds of food since 2011.

By now these young volunteers have ventured beyond their campuses, also working with corporate America, helping employers figure out how to get surplus from their cafeterias and conferences to where it will be eaten.

“What the first few students were doing in the beginning was simple in their minds. Just take this food to the church or pantry down the road,” says Regina Anderson, executive director of Food Recovery Network.

But today the large nonprofit that sprouted from the power of grass roots organizing is growing in a more sophisticated way.

“We are looking at aggregated data to understand where to focus to get more chapters. The first data set, which we got from the EPA [U.S. Environmental Protection Agency] looks at where food surplus is. We overlaid across that a data set from Feeding America to see where the most food insecure people are. And we look at how to mobilize more students in those areas,” Anderson says.

What sets FRN apart in her eyes is that students propel the movement, and she and her staff want to keep them in the driver’s seat. They are forging special relationships in their own communities, and FRN gives them resources to know how to go about it.

Guidance and training are tailored for students’ regions and their means.

Volunteers in urban areas like New York City for instance may not have cars, and staff help them find partner agencies that can come to them or that they can walk to.  Or they help them connect with a driving service (Lyft).

“So, we focus on where the chapters are in relation to where recipients are to make sure the food gets to where it needs to go. And we help students figure it out,” Anderson says.

Youth develop relationships, not only in their communities, but with kitchen staff and dining managers. FRN encourages that relationship because they are the ones that have to sign off on the food so it can be taken off campus.

“Often dining providers say no because they mistakenly think they can’t [give the food away] legally. They may not be sure students will be there and do work consistently.  Or they say, ‘We run a tight ship and now you are asking us to change how we do it.’ So students educate them, and those that are hesitant at first hear them out,” she says, adding that FRN is about dignity and respect. And with dining staff that dignity and respect comes from that they are no longer asked to throw away a hard day’s work.

“We stop that cycle of disrespecting the worker and the work that they do. And they reconsider partnering with the students to salvage the food,” Anderson says.

The women and children who come into this emergency shelter are fleeing domestic violence.

“The shelter is a safe place for them. Having FRN deliver food from the University of Texas five days a week allows them reprieve from making meals at a time they are dealing with so much emotional trauma. The food we receive from FRN is already prepared, nutritious and offers a good variety so clients are not burdened with this extra work. They have more time for healing and spending with their children," Leos says.

Students seem to be creating a ripple effect.

“Once they graduate, they are going into all types of industries and professions. They are doctors, artists, busines administrators, and entrepreneurs, and they take this message of prioritizing food recovery and not wasting food into their sectors and try to instill a culture within their businesses,” Anderson says.

Over the years more than a few of the volunteers have done turnabouts in their early lives, based on what they see and hear and do through FRN.

“They think of what causes hunger in the first place. Some of them have changed their majors or career plans. It has changed them because of their exposure as part of their community helping to solve hunger. It happens many times every year,” Anderson attests.

Elaine Losekamp was actually already moving in the direction of a food sustainability focus when she founded an FRN chapter at Western Kentucky University two years ago.

She was studying agriculture and beginning to think about work in sustainable agriculture, to feed people in need while addressing environmental impacts of wasted food. She graduated last year and now works for a gleaning organization. These nonprofits set up communitywide food recovery networks. Losekamp’s job is to initiate another gleaning program under the organization’s umbrella.

While a student, not much after she founded the campus chapter, she began reaching out to businesses that wanted to do food recovery, helping them to set up programs and find partners.

This early involvement proved to be a springboard.

“FRN provides a template to those who want to start their own chapter. And what I most learned is how to mobilize all these volunteers to move food and get other nonprofits involved. It’s the same mechanics as starting a local, small-scale nonprofit. It’s a big task to get all the moving parts together – and challenging for anyone, but especially young students who just graduated,” Losekamp says.

“I think I would not have had the experience or know how to start a gleaning program if I had not had support from FRN. Now I’m doing this as a job,” she says.