Examining the Potential of Electric Hybrid Systems for Refuse Vehicles 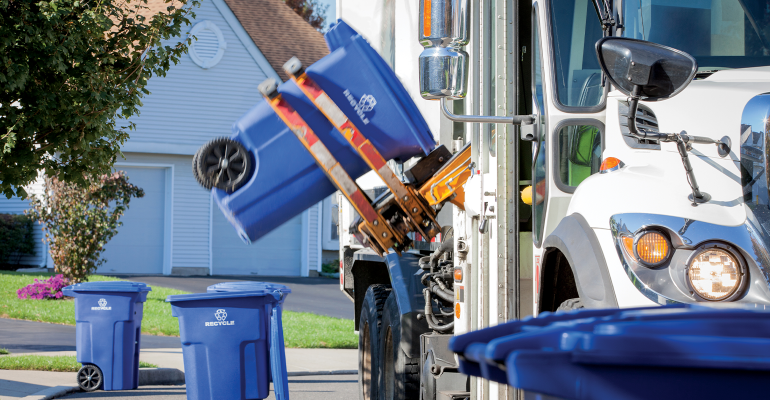 Electric vehicles are quickly gaining popularity everywhere. Various solutions for drivelines, motors and batteries are commercially available for propulsion of light and medium duty vehicles. However, when a larger machine requires power to propel the wheels, transport loads and drive hydraulic functions, its “electrification” becomes more complex. For such applications, an electric hybrid combines some advantages of the electric solutions (e.g. smart energy usage, lower emissions) while keeping the performance and range benefits of a traditional diesel engine. This article explains the benefits of an electric hybrid system and analyzes its application to a refuse collection truck.

Over the last few years there has been a significant increase in the popularity of electric cars. These vehicles are efficient, silent and do not pollute the air (at least where they are driven). In looking at the function of an electric car, there are several keys to the success of the electric technology. First and foremost, is the fact that the battery, inverter, and electric motor have reached a level of efficiency and power density that allows a car to be driven several hundred miles between charges. Even with the weight of a battery, the weight of an electric car is about the same as a combustion engine car. The added battery mass is offset by weight savings in the engine and by simplifying the driveline. And finally, an electric car efficiently utilizes energy recovery with its brakes. All these factors put passenger cars in a “sweet spot” for electrification today.

Vehicles that are based on a truck chassis demand more from electrification than passenger cars. For these vehicles the primary energy source must not only power the driving, but also power the transportation of loads and the hydraulic functions, which can be significant throughout the day. This is the situation for automated side loader (ASL) refuse collection vehicles. A side loader can carry approximately 15,000 pounds of garbage and uses a hydraulic system to pick individual trash cans while compacting the load [1]. The work of hydraulics becomes very significant considering that a truck normally collects between 1,000 and 1,500 trash can loads per day. In order for a fully electric vehicle to complete this amount of work, it must be powered by a very large battery. Besides being a significant cost adder, a large battery leads to a decrease in payload, which is the most important factor when it comes to material collection and transportation.

Various fully electric automated side loaders have been built and tested as vehicle demonstrators [2]. However, as of today, the electrification technology that is driving the success of electric passenger cars has not found commercial applications for this class of vehicles.

The Promise of an Electric Hybrid System Interim Solution

For sure in the future, the industry will be able to leap over these challenges; perhaps fuel cells can be the answer. But with the current level of technology, it is difficult to see the value of a full electric chassis for equipment like refuse collection trucks. An electric hybrid system, however, brings significant value to this market and could represent a “bridge solution” while the electric technology develops towards higher power density storage devices.

A key benefit is that this type of system can be implemented with readily available components without revolutionizing the chassis architecture. It is also combined with a small battery pack, which does not affect the payload capability of the vehicle.

The electric hybrid solution envisioned is particularly attractive in machines that work with repetitive cycles and require a significant amount of power to move hydraulic functions. In traditional ASLs, the operator drives the machine and, between stops, collects the garbage cans by operating a hydraulic arm. While performing these functions, the packer continuously runs to compact the load inside the body.

The collection of the trash cans happens while the truck is at idle and the pumps rotate at low speed. This operating condition is the opposite of ideal because the pumps and the engine produce the work at a very inefficient operating condition. Furthermore, the engine is loaded at idle and, in order not to stall, it produces the traditional muffled noise, which also accompanies higher emissions.

A significant, but simple, improvement to this situation can be achieved by implementing an electric hybrid system for implement control, as the one represented in Figure 2. 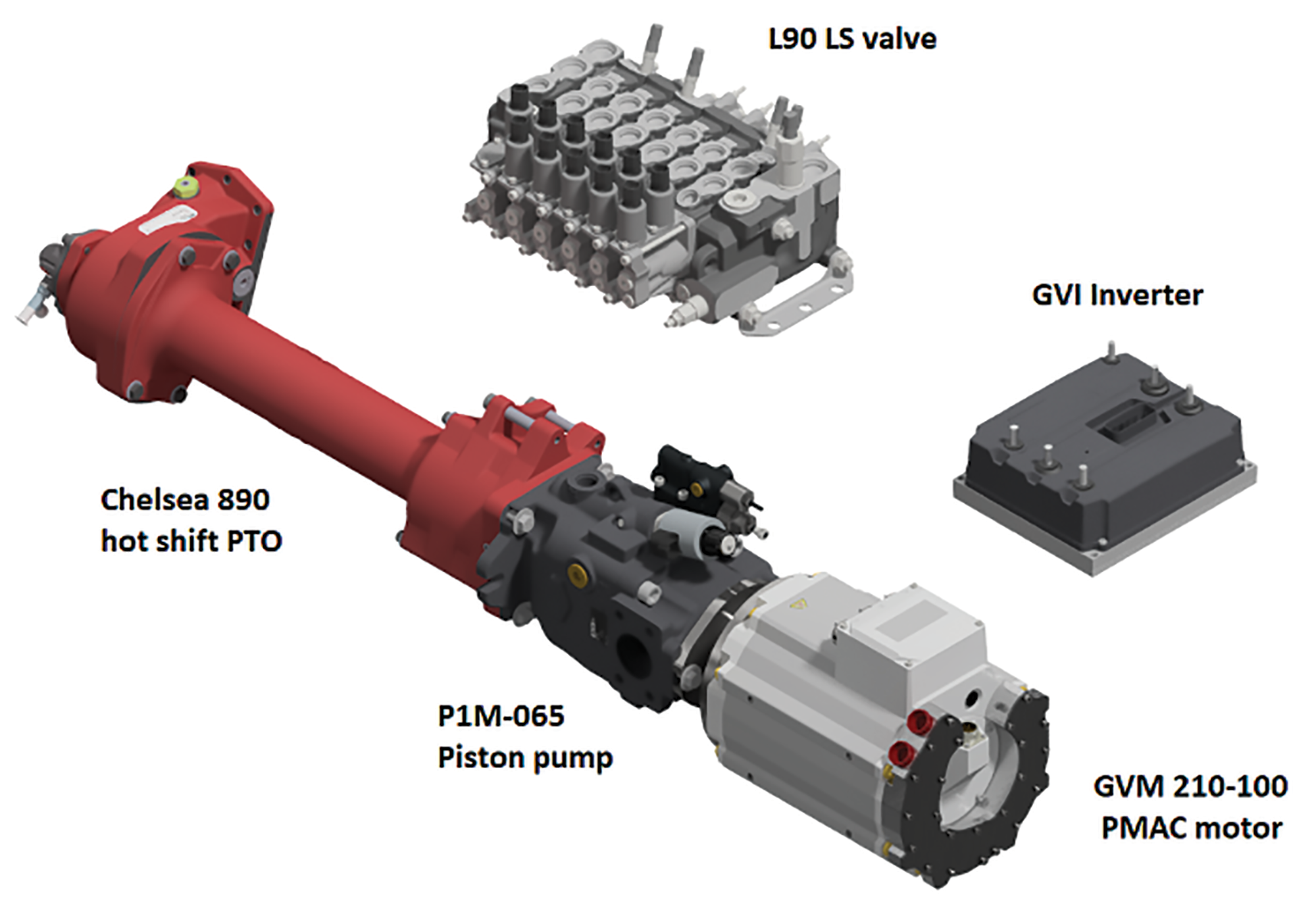 Here, the hydraulic pump(s) use a thru-drive configuration and are piggy-backed to a permanent magnet electric motor. This subassembly is mounted on the truck transmission using a traditional clutch-shift PTO. The electric motor is controlled via an inverter which derives power from a compact battery pack. A high level hydraulic and electrical circuit of the hybrid solution is represented in Figure 3. 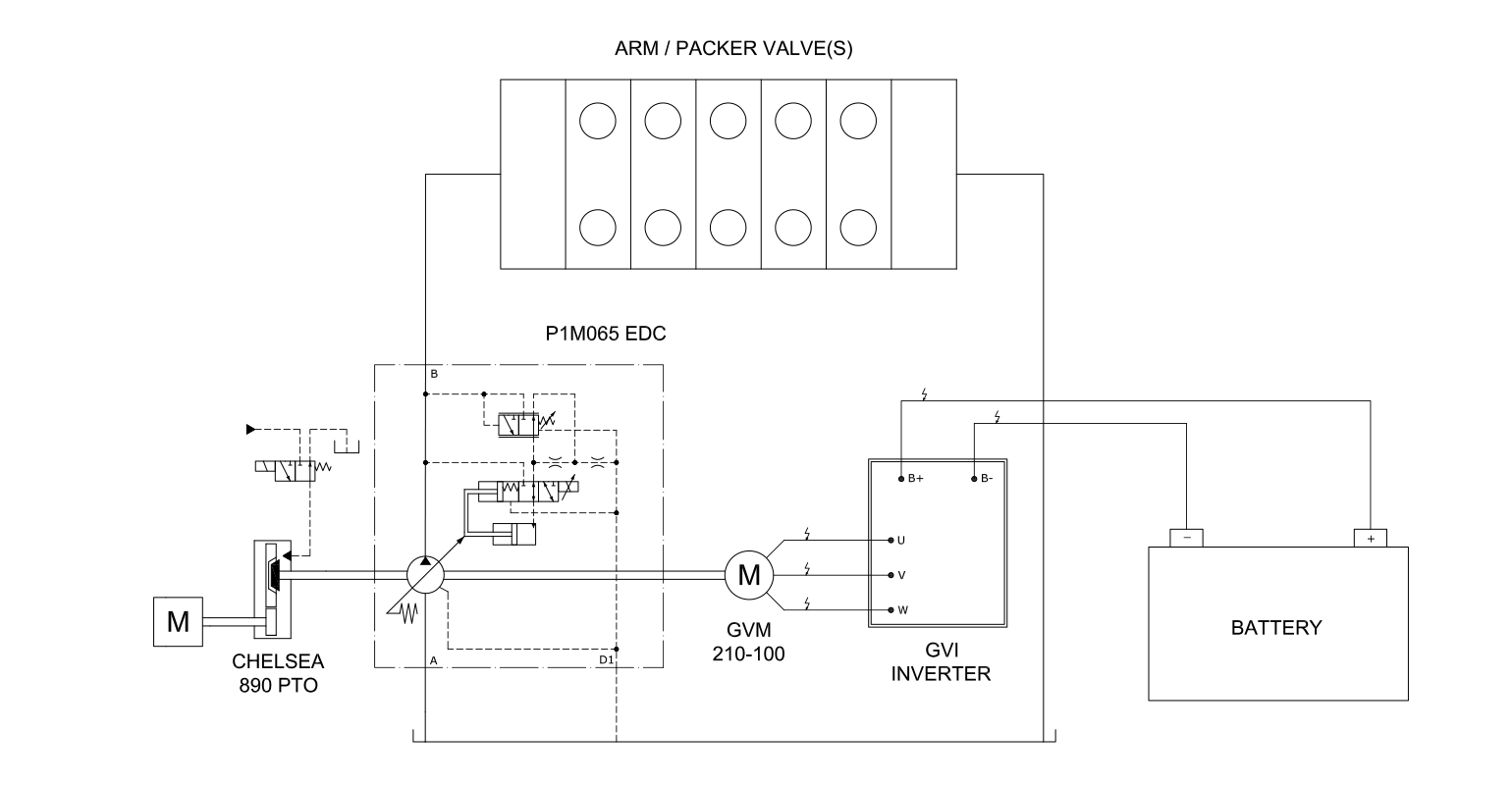 When the ASL truck stops to collect the garbage cans, the PTO de-clutches and the pump is driven by the electric motor in the back. While this happens, the truck engine can idle, without being loaded, or can also come to a full stop. In this scenario, the pump can run at its optimal speed and reach maximum efficiency (1800-2200 rpm).

When the truck drives between stops, the PTO is engaged; the pump runs the packer function and the electric motor works as a generator recharging the batteries. The electronic control unit can modulate the instantaneous amount of charge depending on the driving conditions to maintain good traction at the wheels.

The battery used in this system is relatively small and functions as a buffer that allows the pump and engine to produce work at higher speeds where the efficiency is best. The engine is not loaded at idle which reduces fuel consumption, emissions, and noise. The pump size can be reduced up to 40% because its speed is no longer tied to the engine idle condition. This produces several other advantages in terms of cost, weight, and installation.

The electric hybrid system is not bound to a defined hydraulic circuit as it can be implemented with different pump and valve technologies depending on the arm geometry and the type of control required. The aforementioned hybrid circuit was tested using a single P1M 65 cc/r piston pump with LS controls and electric torque limiting supplying flow to an L90 load sensing valve bank where the arm sections are prioritized over the packer sections. Details about this type of hydraulic architecture and components operation can be found in [3].

In this scenario, the system was tested using data recorded from an ASL driving on a dense route cycle in the suburbs of Detroit, MI. The test started with a fully charged battery (10.4 kWh) in a dense neighborhood. The system was able complete over 300 garbage can pickups without any significant longer driving phase. The battery used was 96 Volt with a stored energy of 10.4 kWh, corresponding to a weight of 238 lbs. (107 kg). The electric motor used had a peak torque of 110 lb-ft (150 Nm).

When the driver goes from house to house, the electric GVM motor becomes a generator that charges the battery. The duration of this phase depends on the distance between houses and on other factors (e.g., traffic, lights, etc.). When the driver approaches the garbage can and activates the dead-man trigger on the joystick, the PTO de-clutches and the GVM motor starts turning the pump based on the flow demand, from 500 up to 2000 rpm.

A portion of the drive cycle is represented in Figure 4 which shows four different charts representing speeds, flows, pressures, and electrical consumption of the system. The one-minute operation has been divided into six phases, labeled from A to F (on top of the charts): 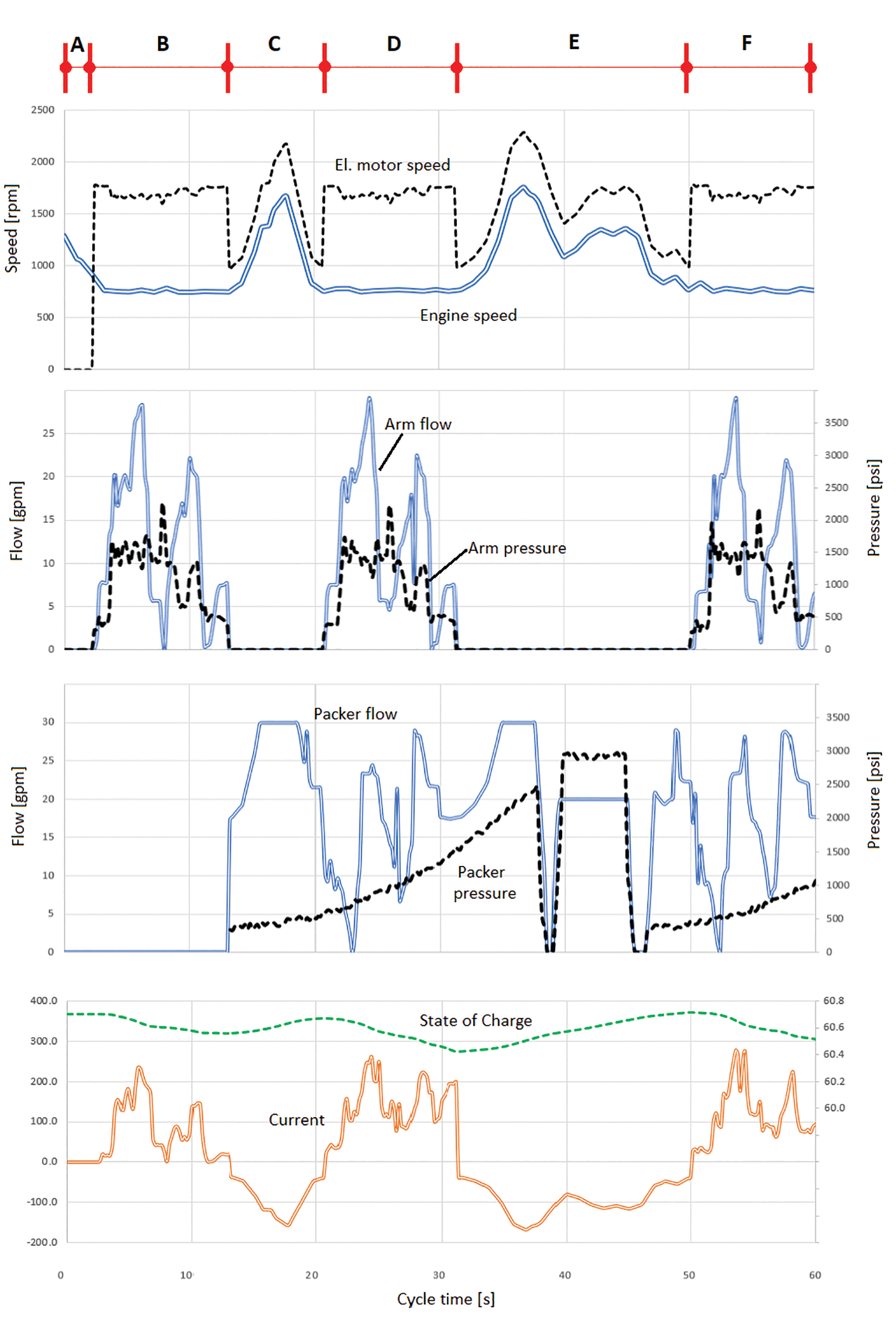 • Phase A is a short phase where no hydraulic functions are running, and the truck is approaching a can.

• Phase B represents the first can pick up: here the electric motor declutches from the engine and rotates at approximately 1800 rpm. The packer is not running. The current consumption (positive current means utilization of battery power) during this phase causes a reduction of the battery state of charge (SOC).

• In Phase C the truck quickly drives to a close-by can. The packer is activated, and it is run from the PTO (PTO/engine ratio 133%). The electric motor works as a generator, the current is negative because it is used to charge the battery (SOC increases)

• Phase D is the second can pick-up. It is very similar to Phase B, with the difference that here also the packer is running together with the arm, therefore demanding higher currents.

• Phase E is a longer drive cycle while packing and recharging the batteries. During this phase the packer reverses and returns to the inner position before restarting again.

• Phase F is the third can pick-up and, like Phase D, it is performed while the packer is running.

The bottom chart of Figure 4 represents, in a magnified scale, the state of charge of the battery (SOC, dotted curve). It is important to notice how even though the three can pickups are executed using the electric power supply, the SOC at the end of the cycle is only slightly lower than in the beginning. When the truck has longer driving cycles, the battery gets quickly recharged.

This article presents a novel system architecture applied to an automated side loader vehicle. The electric hybrid system takes advantage of the decoupling of the engine from the implement hydraulics providing the following results:

• Component Downsizing: pump size can be cut by 50% with respect to usual ASLs, where the installed pump capacity is at least 130 cc/r

• Reduced Emissions: the implement work is not done by the engine at idle, which is usually the worst condition for emissions

• CNG Engine Compatibility: the system is easy to combine with CNG engines where the torque available at idle is usually a limiting factor

• Improved Efficiency: pumps and engine are utilized in the “sweet spot”

• Reduced Noise: the engine can turn off when the truck is picking up cans

The benefits of an Electric Hybrid System are not limited to ASLs. The system can easily be adapted to similar applications, such as residential front-end loaders (FEL) where the arm is installed on the cart attached to the forks.

Germano Franzoni is a Senior Systems Engineer with Parker responsible for system design and business development within Parker’s Global Mobile Systems team. He earned a Ph.D. in Mechanical Engineering, with a specialization in hydraulics, holds two patents and is the co-author of the textbook “Hydraulic Fluid Power: Fundamentals, Applications and Circuit Design”. He can be reached at [email protected].

Barun Acharya is a Global Industry Market Manager with Parker Global Mobile Systems and focuses on electrification for all Off-highway platforms. He has an M.S. in Mechanical Engineering and MBA in Finance and has 14 patents. His email is [email protected].