The U.S. Environmental Protection Agency office in Seattle recently awarded the Seattle Mariners with the "Setting the Example Award."

The agency recognized the major league team for its leadership in sustainable ballpark operations since 2006. The Mariners recycle or compost more than 90 percent of all waste generated at Safeco Field. In 2013, the team diverted more than three million pounds of waste from landfills and saved $114,000 in waste disposal costs.

“The Mariners reflect the green values of their city and fans as they set a national example for sustainable games,” says Dennis McLerran, EPA Regional Administrator for the Northwest Region.

Large scale recycling and composting done at Safeco Field can be done small scale by fans at home.

"It’s important we all do our part because so many cherished Northwest sports and outdoor activities depend on a healthy environment,” he says.

For years, professional sports have been going green. Partnering with business, environmental and government agencies, they are implementing everything from solar panels to recycling and composting programs.

But how successful have professional sports teams been at reducing their environmental footprint?

By introducing a comprehensive recycling program aimed at zero waste, the Mariners increased the recycling rate at Safeco Field from 12 percent in 2005, to more than 70 percent in 2010 and saved $70,000 on waste disposal between 2007 and 2010.

But leagues and teams aren't going it alone.

The Green Sports Alliance is an industry coalition working to make sports more sustainable. Since launching nationally in 2011 with six professional teams, including the Mariners, GSA has grown to include nearly 300 teams, venues and universities from 20 different leagues. Member teams work to adopt environmental programs and share best practices, while measuring and reducing their environmental impact.

Once a member commits to measuring its impact from energy, water, waste, etc. GSA routinely sees a 30 to 40 percent reduction in operating costs for that member,  says Justin Zeulner, COO of GSA. 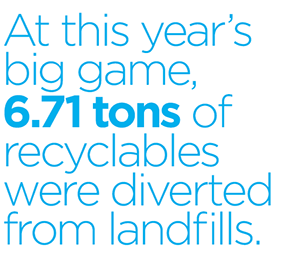 Whether recycling, striving for zero waste, or composting, GSA sees high waste reduction numbers from teams like the Portland Trail Blazers and other "aggressive" members.

"They know their footprint, says Zeulner.

They set goals for minimizing waste and earned a 60 percent reduction in carbon footprint and millions of dollars in operational savings.

The success, he said, is in the makeup of the association.

"We're not a non-profit organization." Zeulner says. "We're not Greenpeace. We're not the Sierra Club. We're not NRDC. We actually are the industry."

And as an industry member, the NFL, too, is looking to do more.

The Seattle Seahawks, for example, are diverting 94 percent of game day waste generated at CenturyLink Field from landfills. The team recycles and composts the bulk of its waste and turns over millions of gallons of used cooking oil for biodiesel production.

At Super Bowl XLIX in Arizona, NFL partners planted trees, recycled, composted and worked with Verizon Wireless to collect 24,000 pounds of e-waste. "Keeping e-waste out of local landfills is a way for all of us to do something positive," says NFL Environmental Program Director Jack Groh.

"The NFL has spent more than two decades addressing the environmental impact of Super Bowl events and activities," he says.

At this year's big game, 6.71 tons of recyclables were diverted from landfills. The NFL and its partners set up 450 ClearStream bins in stations of three to collect trash, compostables and recyclables, allowing fans to reduce waste in what the league calls "a cost-effective recycling strategy."

EPA ranked the league 17th on the list for reducing its environmental impact with efforts including NHL Green, a sustainability initiative created in 2010, and its groundbreaking 2014 Sustainability Report, which documented and disclosed the league's carbon footprint.

NHL Commissioner Gary Bettman says the league is proud to be recognized for protecting the environment and preserving hockey's roots.

"Most of our players learned to skate on outdoor rinks. For that magnificent tradition to continue through future generations we need winter weather - and, as a league, we are uniquely positioned to promote that message," says Bettman.

EPA is recognizing that stewardship.

"The NHL's commitment to use 100 percent renewable energy is a hat trick for clean air, our health, and our climate," says EPA Administrator Gina McCarthy.

If there's one doubt of a true paradigm shift by professional sports, it's whether teams truly are offsetting the carbon footprint of traveling fans and teams and their impact on the environment.

Even GSA's Zeulner admits there's more work to be done.

Teams like the Trail Blazers enjoy an energy reduction by 2.5 million kwh per year. Still, an energy load remains, he says. So teams use RECs.

"We're going to have a carbon impact based on energy consumption at our venues and on our teams," he adds. "So why not find really good sources to offset that?"

At the Super Bowl, for example, Salt River Projects provided 100 percent wind power through RECs covering an estimated $300,000 in electricity demand generated for the week-long events.

It's not the only answer, Zuelner says. But it's significant, and it works with the integration of multiple sustainable pieces.

Not only are professional sports taking the initiative to lower their environmental footprint, they're making "better" ecological decisions.

"I say, 'better,' specifically," he says, "because it's not about best. It's about better."