The process of methane oxidation reduces the emissions of methane and other volatile hydrocarbons from the surface of landfills. Quantifying methane oxidation is one of the major uncertainties in estimating national or global methane emissions from landfills. Landfill gas (LFG) that is not collected or vented passes through landfill cover soils prior to being released to the environment. Bacteria near the landfill’s surface consume methane and other volatile hydrocarbons produced by the decomposing waste by reacting it with oxygen. These bacteria harness the energy from these enzyme-catalyzed chemical reactions to fuel their respiration. A portion of the methane also is incorporated into the biomass of the microbial cells.

The current default value set by the Intergovernmental Panel on Climate Change (IPCC) and the U.S. Environmental Protection Agency (EPA) for landfill cover methane oxidation is relatively low — between 0 and 10 percent of emitted methane (set by the IPCC in 2006 and EPA in 2004). This value was based on seasonal results for a New Hampshire landfill as determined by studies published in 1996 by Czepiel et al. The 10-percent value was proposed at an IPCC workshop in Washington in 1995. At an international seminar in Chicago in 1997 it was agreed to use 10 percent as a standard value. The results of the comprehensive New Hampshire studies in New Hampshire were just being made available at that time.

To our knowledge, the EPA published the earliest government document making reference to a 10-percent value for landfill methane oxidation in 1998. In this document, the EPA cites the aforementioned New Hampshire studies, which included seasonally-averaged annual values of 10-percent methane oxidation. The 10-percent value for this landfillwas subsequently confirmed using air plume studies by Chanton et al. in 1999.

A 2004 EPA report stated that “average oxidation of methane (on a volumetric basis) in some laboratory and case studies on landfill covers have indicated ranges from 10 percent to over 25 percent with the lower portion of the range being found in clay soils and higher in topsoils.” Due to this general uncertainty and the lack of a standard method to determine oxidation rate, the EPA recommended the default factor of 10 percent by volume methane oxidation for landfill cover soils.

A value of 0 to 10 percent oxidation also was recommended by the IPCC in 2006 guidelines for national greenhouse gas inventories: “The use of an oxidation value higher than 0.1, should be clearly documented, referenced, and supported by data relevant to national circumstances.”

Our team also confirmed that, in addition to climate and soil type, the methane load on the soil cover from the waste below has a significant influence on oxidation. They reported that below a certain methane loading rate oxidation can be 100 percent. In this region, the soil cover can oxidize all of the methane coming from below. Above this loading rate, the soil is not able to oxidize all of the incoming methane.

The EPA does not recognize these values and has not revised its 10-percent value for landfill cover oxidation. It argues, “The percent of methane oxidized at the landfill surface is highly dependent on the velocity of gas flow. While areas of low flow are expected to have significant oxidation, areas of high flow will have little to no oxidation. Landfill gas will generally flow to the surface in fissures and channels that offer the least resistance to flow. These high volume flows will not have significant oxidation.”

The objectives of our project were to:

We performed static chamber isotopic measurements at 20 U.S. landfills with different climates and cover types. In each case we collected a sample of landfill gas and measured the isotope signature of these initial samples. These samples represented the methane that was present at the landfill surface. The concentration of methane in these samples exceeded the concentration of methane in air upwind from the landfill, indicating that they contain landfill methane emitted from the soil, cracks and piping.

From this data we can calculate the percentage of oxidation across the landfill surface released from both the primary and secondary porosities of the landfill soil, including plumbing leaks.

Our results compile seasonal studies at 20 different landfill covers on 37 occasions. The study included a range of climatic types, including five climate zones from the deserts of California to the subtropics of Florida.

Mean methane oxidation within the soil covers was 38 ± 4 percent. The results compared extremely well with our literature review, which comprised some 30 recent publications and reported a value of 35 ± 5 percent oxidation. Both values are considerably greater than the default value.

We also found that the percentage of oxidation was greatest at arid sites relative to Mediterranean sites, or cool and warm continental sites. Subtropical sites had the least amount of methane oxidation. From these results, it appears clear that the percentage of oxidation is inversely related to methane fluxing up to the bottom of the soil cover (also known as methane loading; see also Chanton et al., 2011). Sites in drier climates have less methane production than landfills in more humid climates. At more humid sites, methane production is greater and more methane impacts on the bottom of the cover soil, reducing the efficiency of the methane oxidizing bacteria.

The results of this work indicate that an effective way to increase landfill cover methane oxidation is to lower the amount of methane impacting it from below. In the early stages of a landfill, when methane is produced at a rapid rate, the most effective way to accomplish this is to have an efficient gas collection system, which lowers the concentration and methane underneath the cover. Additionally, attenuating the flow of methane through a landfill cover will allow more downward oxygen diffusion into the cover, to promote oxidation. 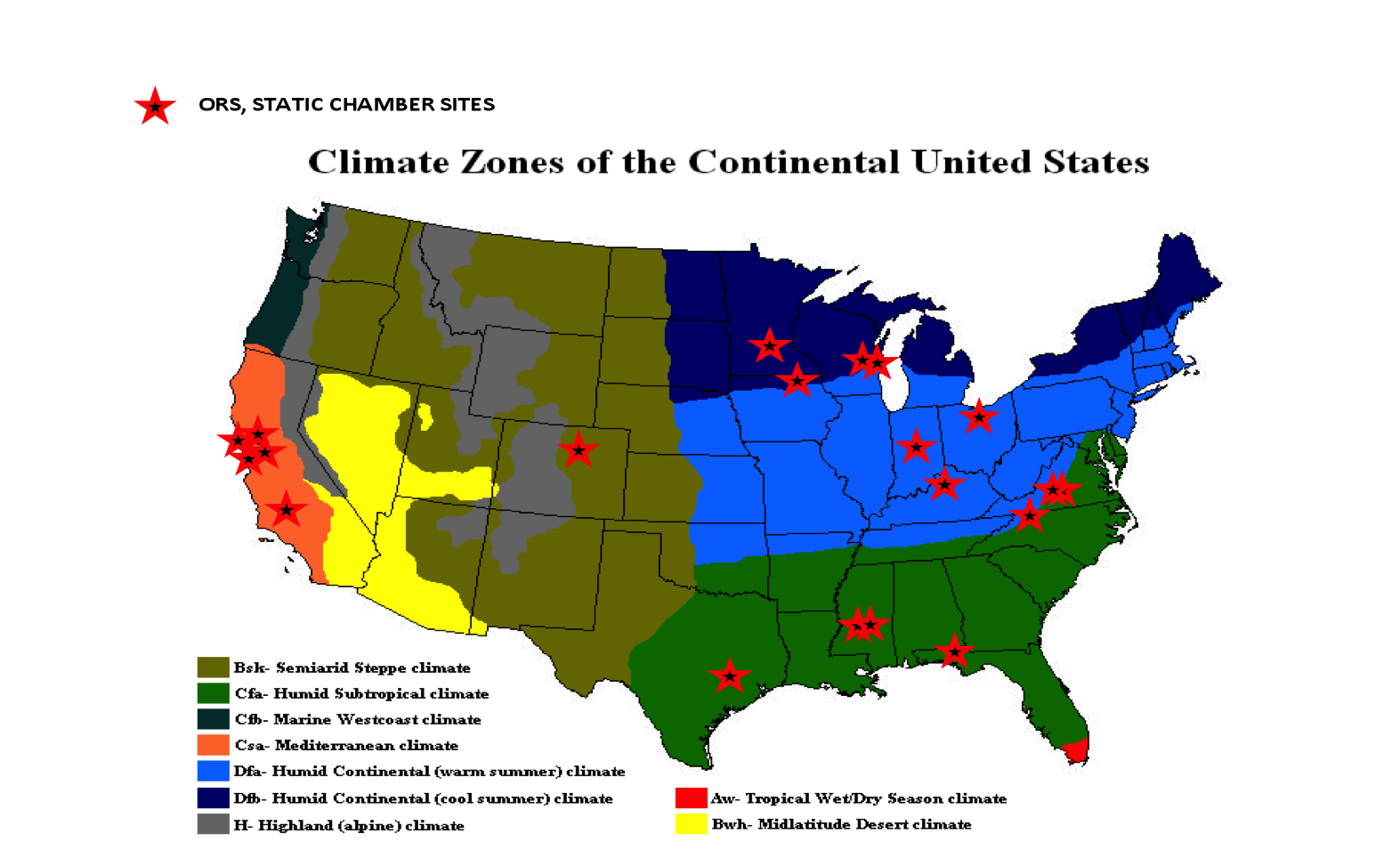 To further address the objection that our measurements do not include gas leaks from secondary porosity we conducted isotope measurements on the landfill’s total emitted methane. This was done using two approaches: 1) by collecting methane upwind (background) and downwind of the landfill, and 2) by collecting methane from representative areas of the landfill with different covers just prior to dawn on still, windless nights when atmospheric inversions cause the air over the landfill to stagnate and accumulate methane.

Sampling upwind/downwind was accomplished using a Picarro cavity ring down laser system, which provides real-time measurements of atmospheric methane. In this manner we were able to capture the isotopic signature of all of the methane emitted from the landfill. Upwind measurements serve as background for both the downwind and nighttime samples. Anoxic methane was determined by sampling gas wells across the landfill.

As noted earlier, the EPA stated in 2009, “Landfill gas will generally flow to the surface in fissures and channels that offer the least resistance to flow. Consequently, a significant portion of the landfill gas is likely to exit the landfill in a limited number of areas under much higher flow rates than other locations. These high volume flows will not have significant oxidation.”

While we agree with this statement, we strongly disagree with the conclusions drawn from it. The above statement does not have to mean that oxidation is 10 percent. The hydraulic properties of soil along with the change in soil structure over time have been well studied in the field of soil science. Crack or fissure development in soil covers can be accounted for by using long-term soil hydraulic properties and by using well-established geo-statistical techniques to randomly introduce cracks or “windows” into simulated soil surfaces or layers, such as landfill covers.

In recent years, our research team developed a numerical model that combines water and heat flow with a gas transport and oxidation model (referred to as the FSU model). The gas transport and oxidation model is able to use dynamic parameters associated with water content and temperature and incorporates dynamic methanotrophic activity to estimate the percentage of methane oxidation in landfill covers. The older version of the model handled only one-dimensional transport, where soil properties cannot vary with space.

The FSU model was then bundled into a graphical user interface in five major modules:

The output of the gas transport module was used to obtain more descriptive effects of cover defects and fissures on methane emissions, and methane oxidation in the entire soil covers with different degrees of defects: “Poor cover” featured many defects; “fair cover,” some defects; “good cover,” few defects).

These results are very significant, because the additional thickness decreases the methane loading up into the cover from below. In other words, thicker covers help increase gas collection efficiency and lead to less landfill gas leaving the landfill through the soil cover.

Tarek Abichou, Ph.D., P.E., is a professor in the Department of Civil & Environmental Engineering at Florida State University and Florida A&M University, College of Engineering in Tallahassee, Fla. He can be contacted at [email protected].

Jeffrey Chanton, Ph.D., is a professor in the Department of Earth, Ocean and Atmospheric Science at Florida State University. He can be contacted at [email protected].

SIDEBAR: See Tarek Abichou present “Using Surface Ambient Methane Concentrations to Estimate Methane Emissions from Old Closed Landfills” as part of the GHG Emissions and Mitigation track at the 2012 Global Waste Management Symposium in Phoenix from 2:00 p.m. to 3:30 p.m. on Tues., Oct. 2. He will also present “A New Modeling Approach to Assess the Effects of Soil Defects in Landfill Cover Soils on Percent Methane Oxidation” as part of the Methane Oxidation track from 8:15 a.m. to 9:45 a.m. on Wed., Oct. 3, and “Waste Composition, Leachate and Biogas Characteristics in Developing Countries: A Case Study” as part of the Leachate II track from 10:30 a.m. to 1:00 p.m. on Mon., Oct. 1.