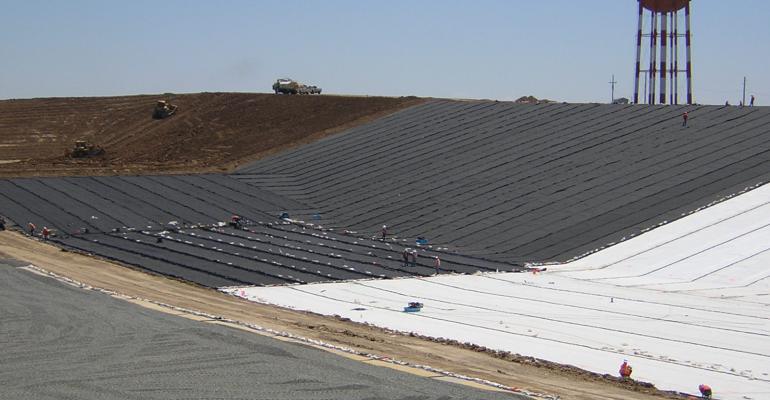 Despite the availability of a number of alternative landfill capping methods, clay covers are still the go-to system in most areas of the country, says Evan Edgar, principal at Edgar & Associates of Sacramento and chief executive officer of Organic Waste Solutions.

Some alternatives include monolithic—or evapotranspiration (ET)—covers, synthetic covers, and hard covers like concrete or asphalt.

George Hull of the U.S. Environmental Protection Agency (EPA) says ET systems are being increasingly considered for both municipal solid waste and hazardous waste landfills, but are generally limited to areas west of the Mississippi River. In those drier climates, Hulls says clay caps can dry out, possibly reducing the protectiveness of the caps. But in areas with more rain than what plans can process through the evapotranspiration process, moisture can seep into the waste resulting in additional leachate and methane generation, he says.

A U.S. Navy study indicates that ET covers may be used in wetter climates than previously thought with proper design, soil properties, and vegetation. The Navy study estimates the cost of at ET cover can range from $10,000 to $150,000 per acre—an estimated savings of 10 percent to 65 percent over traditional clay covers.

ET cover systems must have permeability less than or equal to its bottom liner, minimize infiltration through a layer containing at least 18 inches of earthen material, and minimize erosion of the final cover by using an erosion later of at least 6 inches of earthen material that can support native plant growth. Alternative cover systems can be used as long as landfill operators demonstrate to their state that they can meet or exceed the performance achieved through traditional systems, Hulls says.

Other capping systems with man-made materials, such as high-density polyethylene (HDPE) have been tested, but Edgar says its uncertain is these systems can match federal requirements that they provide the same or better protective quality as clay. Only time will tell, but Edgar says for the work and cost involved, landfill operators may want to rely on proven systems.

“A lot of the closure plans go 30 years,” he says. “The landfills are forever, so you better have a cap that lasts forever. I would be hesitant to have other alternative covers out there that aren’t protective that can’t be maintained for eternity. It doesn’t make sense to do an alternative cover on the cheap when it has to last forever.”

It’s for these reasons that caps for engineered radioactive waste disposal facilities are required to include thicker layers of soil on top of their caps to accommodate plant roots and protect clay covers. Rocks ad other materials may also be used to prevent animals from burrowing, she says.

Flexible membrane materials such as HDPE may be used in caps, either as a substitute for clay or in addition to clay, because membranes can accommodate some settlement of the underlying waste without being breached, Smith says. HDPE can also provide benefit in taking up less space that clay or natural soils, she adds.

Composite capping designs incorporate both low-permeability layers (clay or membranes) to prevent water from entering the completed landfill and to prevent gas from escaping, and permeable filter layers to manage water that enters the cap as rain and to manage gas generated within the landfill, Smith says. Filters can be made from soil or from geomembranes. A filter layer installed over the waste, below a clay or a membrane "cap" layer, can be designed to direct landfill gas toward a methane collection system. A filter layer installed above the clay or membrane "cap" layer can direct runoff away from the landfill surface.

The Navy also studied hard surface capping using materials such as asphalt or concrete. Such covers can be used when access to the site by heavy equipment is required, or when clay barriers in dry climates fail. Asphalt if favored over concrete in these cover types because of the bitumen binder in asphalt provides more flexibility and crack resistance.

Asphalt caps usually include a low permeability layer on top of a high permeability foundation later, which helps reduce negative effects of settling and provides enhanced drainage. In arid climates, the asphalt cover may even be protected from sunlight and oxidation by burying it in native soils. The Navy report indicates that asphalt or concrete covers may be used to contain volatile organic compounds (VOCs), and semi-volatile organic compounds (SVOCs), polychlorinated biphenyls (PCBs), ordnance compounds, and inorganics as alternatives to multilayer caps.