From Driver to VP, Grit Takes Grillo to the Top at MWM 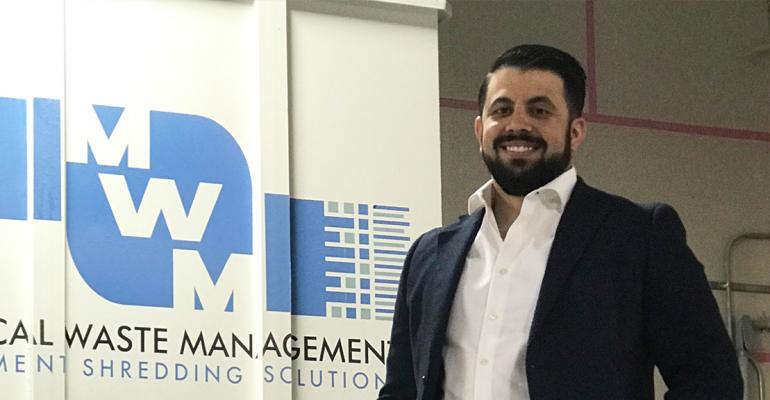 The 2019 Waste360 40 Under 40 award recipient discusses why he took such a big leap of faith to join Medical Waste Management back in 2012.

Mark Grillo started out in the waste and recycling industry as a truck driver and router. He was Medical Waste Management’s (MWM) first hire in 2012 and has since worked his way to the top of the company as vice president (VP).

When he first joined MWM, Grillo took a $30,000 pay cut and played a key role in building the company into a major player in the medical waste industry in the southeast region. According to Taylor Chunn, the company’s founder, during his tenure, Grillo contributed to many of the acquisitions of MWM’s large healthcare systems and has helped the company become one of the top privately-held medical waste companies in the country.

“Mark has always been a grinder,” says Chunn. “He has always been the guy who shows up first and leaves last. Mark has always had a ‘whatever it takes’ attitude and a ‘we'll get it done’ approach. These are some qualities about Mark that I admire most. We need people in our company like this in order to make a difference in the industry. Mark is a great example of if you show up every day, put in the work, give it your all, always deliver your best and are committed to making a difference, you can and will make it to the top. Others can learn from Mark's dedication to his role and in making a positive difference in an industry.”

We recently sat down with the 2019 Waste360 40 Under 40 award recipient to discuss why he took such a big leap of faith to join MWM and how he was able work his way up as the company’s vice president.

Waste360: You started your career with some help from a fellow Waste360 40 Under 40 award recipient. Can you tell us a little about that?

Mark Grillo: Taylor Chunn, who owns Medical Waste Management and was a [Waste360] 40 Under 40 winner in 2016, and I had a class together and were mutual friends in college. We realized that we had a very similar work ethic, and we respected one another. When he started Medical Waste Management, it was intriguing to me, and I told him that if there was an opportunity for him to hire someone that I would love to help grow that business. He called me about a year after he started, and he offered me a position. So, I decided to take a leap of faith, and I took a $30,000 pay cut and moved back in with my parents to begin working for Medical Waste Management.

Mark Grillo: I just enjoyed the idea of something new and different, and I liked the idea of being part of a small business. My dad owns his own business, and it was something that I always wanted to do. So, the opportunity of doing this with one of my best friends and being able to be an entrepreneur without as much financial risk burdening me seemed like a good fit. In fact, my dad actually pushed me to make that decision.

Waste360: How were you able to work your way up to vice president after starting out as a driver for MWM?

Mark Grillo: I think a lot of that goes into my work ethic. When I started, it was just Taylor and myself, so we didn’t have marketing. Taylor and I were the only sales people, and we were still learning. We didn’t have an operations department. For our 100 customers at the time, we had everything memorized. As we grew—and when Taylor had time to sell and I had time to sell—we needed an operations department, a sales department and a marketing department.

When I was off the truck at night, we would redo routes, and I would look into ways to make the company more efficient and incorporate sales tactics. I would go over marketing tools and anything to make our sales better. I was really doing the work of three or four people at once, and that’s really how we grew.

When I was overloaded, we would hire someone and tell them, ‘Hey, take what I’ve built and make it better and make it your own.’ From there, it propelled me to create all these other departments, and I was overseeing them all and then became vice president.

Waste360: As a former driver, how do you feel the industry is a good fit for a younger workforce of drivers, helpers and technicians?

Mark Grillo: I feel like it’s a great starting position. It’s one of the few industries where you can start from the bottom and work your way to the top. There are many success stories of people starting as a driver or a technician and working their way up because it gives you a chance to really learn your business from the ground up. For a young college grad or someone directly out of school who wants to get into something where they can really grow, I feel like it’s a good launching pad to get your career started in the waste industry.

Waste360: I hear you’ve won your company’s Mr. Trashy award twice. What exactly is the award, and how does one go about winning it?

Mark Grillo: The Mr./Miss Trashy award is something that Taylor and I created as we started getting more employees to recognize people who day-to-day give us their all to make MWM a better company. It is for people who are self-motivated and have a knack for continued improvement.

Waste360: What do you feel are some of your greatest accomplishments in your career so far?

Mark Grillo: For me, personally, Medical Waste Management becoming a common name in the industry is something I am very proud of. Also, helping build a company that I am proud of. It’s one thing to go to a job every day and say, ‘Yeah, I do this.’ On the other hand, to be proud of what I’ve done and what I do is something that makes me proud to hang my hat on, and that is a big deal for me.

Winning the 40 Under 40 award was something that was on my bucket list. Once it came to be, I was able to get it with 10 years to spare.

Waste360: What are some of the obstacles you’ve had to overcome in your career?

Mark Grillo: There are two that really stick out and go hand-in-hand. Our company has grown exponentially in the last six to seven years, so it has been a challenge adjusting to and keeping track of hypergrowth. What I mean by that is just being able to keep track of the day-to-day—hiring, what we have going on, what moving pieces are going where and just making sure that we have all our I’s dotted and T’s crossed.

The second piece that goes along with that is separating home life and work life. It’s very difficult to separate the two because our business is running 24/7, and in my position, it is difficult to do everything for both. Luckily, I have a very supportive wife and family who allow me to do that.

Waste360: What is your leadership style at MWM?

Mark Grillo: I like to lead by example; do it once and do it right—that is my slogan for everyone. I try to stress the importance of taking pride in your work and being the best in your own category. What I mean by this is if you’re going to be a driver, be the best driver you can be. We have a philosophy here that we groom the best employees in the industry through our training and education. Some of our best employees are ones who had no clue what we do, and we train them ourselves. We’ve had less luck in regard to retention with people who have experience; we truly feel our training and education is better.

I try to be cognizant of my employees’ feelings by putting myself in their shoes and thinking about what is going on in their life right now. Maybe they have an attitude because they are having a bad day. I try to be involved in their personal lives as well as their work lives to best help their needs.

Waste360: Are the U.S. Environmental Protection Agency’s (EPA) finalized standards for managing hazardous waste pharmaceuticals changing the way the company operates or changing its services at all?

Mark Grillo: It does and doesn’t at the same time. We specialize in being creative. We have someone who specializes in keeping up with new things that are coming to fruition as far as EPA and regulatory rulings, so we are ahead of the curve. It is more of an educational hurdle for our healthcare systems and the clinics we work with than it is for us, per se.

The industry is experiencing major headwinds right now, and we see many opportunities with that. With the healthcare market consolidating, we are adding service volumes for things like this to keep a competitive advantage. It really is an easy add-on for us, and it truly makes sense for the environmental reasons why EPA is doing this as opposed to discarding materials down the drain.

Waste360: What trends are you seeing in the medical waste sector, and what do you project for the industry moving forward?

Mark Grillo: I see a lot of stuff consolidating and companies trying to offer more and more services. There is a huge downturn in recycling right now, unfortunately. The prices are climbing substantially, S&P prices are dropping and people aren’t willing to participate as much anymore. People are willing to recycle if it doesn’t cost them money or if it makes them money. But if you can just throw something away for 10 cents on the dollar as opposed to recycling, at the end of the day, the almighty dollar rules all, so it’s unfortunate that recycling is dropping in value.

I think this will be a headwind for a bit longer. I think it’s going to weed out the smaller, less established companies and let the companies that are more resilient and more creative rise to the top and continue to make the industry better.