During CRI’s February 26 webinar, “Duty to Warn: New Impending Crises & Price Drops and How that Impacts Recycling Programs,” Collins explained claims have been circulating that aluminum and PET plastics are so valuable that they end up paying for costs associated with curbside recycling. Those claims, she said, are false for a few reasons.

“First, aluminum and PET are a small portion of the curbside mix and, while they do have positive revenue, only aluminum truly pays for itself in recycling,” explained Collins. “The costs in collection are far greater for all the material types, and this claim is often used to compare curbside programs to container deposit programs.” 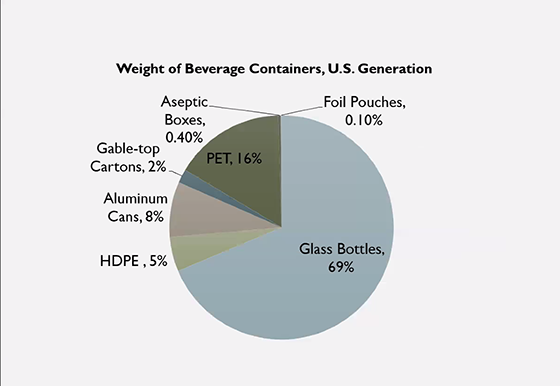 Different materials have different costs, and costs for both types of programs are allocated for labor, capital and various operating costs. Then, there is the collection phase of the cost process as well as the materials phase when recyclables are trucked to materials recovery facilities (MRFs).

“Aluminum is the one material that will pay for itself in curbside programs, but PET and glass do not, nor do any of the other material types,” noted Collins. “Another myth we hear is costs are different in deposit programs than they are in curbside programs. In general, the costs come out about the same.” 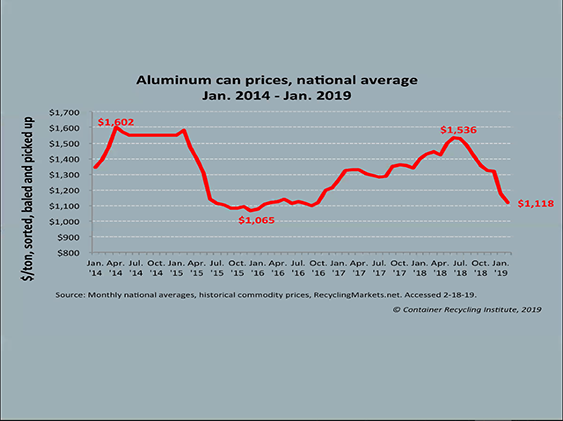 The key thing to remember is that certain material types are costly to recycle no matter what system they are in, she added. For instance, when it comes to beverage containers, whether in a curbside or deposit program, glass bottles are the majority of the weight. And aluminum cans, while at a net profit, aren’t enough to offset the net cost of PET and glass.

CRI’s webinar further discussed how total recycling costs go beyond the MRF, potential opportunities in a post-National Sword world and the risks posed to redemption centers, particularly in California. Here are the key highlights from the webinar.

Although total recycling costs go well beyond the MRF, Collins emphasized that when recycling is discussed and reported on, it’s a structure she refers to as “MRF Myopia.”

“We talk about contract prices at MRFs, but communities often forget that the majority of this cost in recycling happens well before material gets to the MRF,” she explained. “Collection is the bigger cost of the two.”

Collection for recycling costs more because there are a lot less compaction opportunities for materials. A hauler operating identical collection trucks for both trash and recycling will be able to hold only about 5 tons of recycled materials, compared to 8 to 10, or even 12 tons, for trash collection.

“If you’re running identical routes for those two, the cost will be almost double as much for recycling,” said Collins. “That is important for communities to understand.”

When considering cost results from container deposit laws, Collins said it is important to remember that there are collection and processing costs for recyclables, as well as collection costs for disposal and landfill tipping fees. 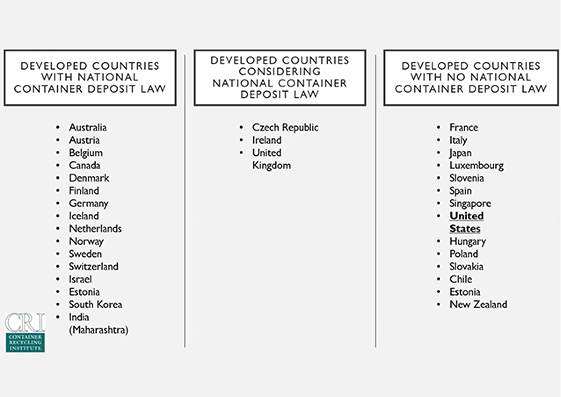 “Only two of these are usually considered when you’re in a MRF Myopia framework,” she noted. “But if you’re going to do full cost accounting, you have to consider all of these costs and any other materials that might be in your recycling bin.”

Over the past few years, the industry has seen a downturn in material prices. Here is a brief look at what has been going on:

“When there are only five or six sites accepting things and one of those sites is no longer purchasing aluminum cans for recycling, it’s sort of like a game of musical chairs, where one chair gets taken away,” explained Collins. “That’s what happened here; it interrupted the supply-demand relationship.”

The result, she said, has been a decline in prices nationally for used beverage containers (UBCs).

“I am not sure that all of the UBCs will be able to find a home in 2019. It may be that some of these items are stored for longer periods of time,” said Collins. “Certainly, the price has already dropped pretty dramatically, and we don’t know what to expect and if there will be more price declines throughout the rest of the year. This is something to watch and be cautious about.”

Opportunities in a post-National Sword World

Before China’s implementation of National Sword, the U.S. exported around 10 million tons of paper to China. Collins stressed that is a huge game of musical chairs in which a lot of chairs were taken away.

But one positive change the industry can make is to focus on materials that have strong domestic market, and the cleaner the materials are, the more they will be worth.

“The opportunity is here. Glass, PET and aluminum have markets in the U.S.,” said Collins. “Pricing is definitely a struggle, but you can extract higher prices out of your materials if you keep them clean.” 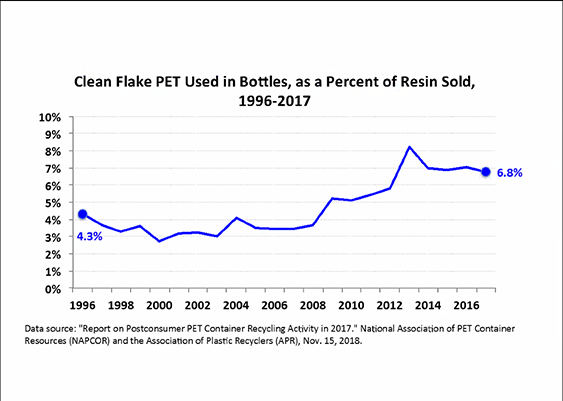 It’s no surprise that single stream curbside material is more contaminated than other programs that separate materials. For instance, PET plastics from container deposit programs typically sell for 40 percent more than curbside PET, noted Collins. Similarly, with glass, curbside glass costs $20 per ton or even more to recycle depending on how contaminated it is versus deposit material that is worth a positive $20 per ton, she added. So, it’s not that glass doesn’t have value, it’s that there are too many negative value materials—contaminants—mixed in with the glass.

Dual stream collection is gaining more traction in California, and this may be a trend across more of the country, noted Collins. For instance, Fayetteville, Ark., conducts curbside sorts, in which items are taken out of residential recycling bins one by one, and any contaminants are left behind for residents.

“That means, by definition, curbside sort is zero contamination, and by definition, there is education that occurs for the residents on what doesn’t go in the bin every single week because stuff gets left behind,” said Collins.

And overseas, there are separate public collection bins for glass in Germany and throughout Europe. There, glass is color sorted, and Europe is able to use much higher content in recycled glass bottle making. 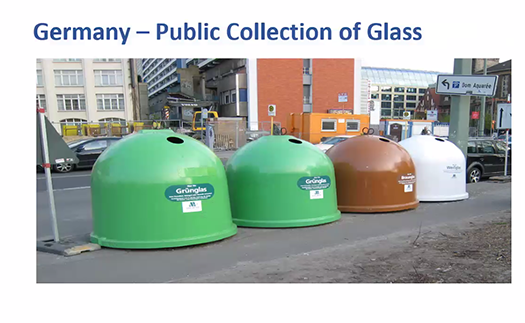 She added that there is plenty of capacity now for PET recycling in the U.S. In 2010, the U.S. exported more than half of the PET plastics collected, but that has changed. 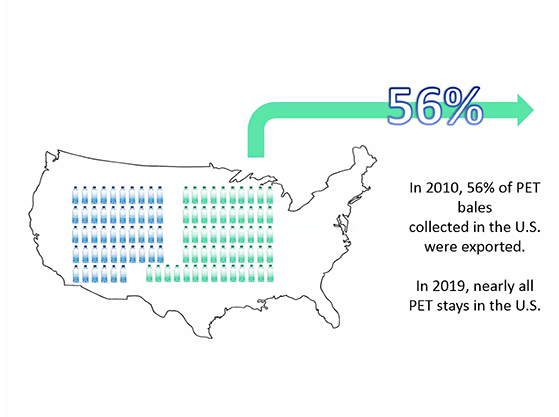 “Clearly, we know that China has stopped accepting baled PET plastics from the U.S. In 2019, nearly all of the PET will stay in the U.S.,” explained Collins. “We have about 23 facilities nationwide, a couple of those have just opened in the last year or two, and we have another one projected to open in Pennsylvania within the next year. We have the capacity to collect PET; as long as we can keep it clean, it will be worth more.”

Scrap values have been trending down since 2012 for all three major container materials. Unlike the other deposit systems in the world, in California, redemption centers receive scrap value and they rely on that scrap value as a major revenue source, explained Collins. So, when these values fluctuate, there are major impacts on redemption centers. 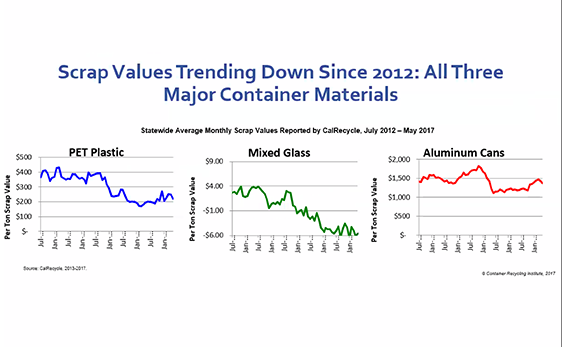 “Because of declining scrap prices and the failure of the payment mechanism from the state to make up that difference, redemption centers have been underpaid by a total of $62 million,” noted Collins. “With this $62 million cumulative loss over all the redemption centers, we lost more than 1,000 redemption centers in California from 2013 to 2018—that’s a 39 percent loss. They simply went out of business because they weren’t being paid enough to stay in business. Payment process coupled with the scrap price decline caused massive financial fears at these redemption centers.”

And that has an impact on consumers as well. Due to the drastic loss of redemption centers, the population served at each center has increased by 75 percent since 2013. With fewer centers open, existing centers are more crowded—having gone from a population of about 15,000 per redemption center to nearly 26,000. 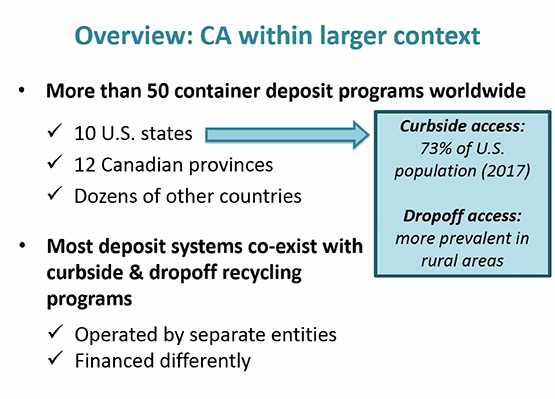 Jenny Gitlitz, a CRI consultant, said the organization is currently working on a new fact sheet estimating beverage container-related profits from curbside and drop-off programs in California. According to Gitlitz, there are more than 50 container deposit programs worldwide, comprising 10 U.S. states, 12 Canadian provinces and dozens of other countries.

CRI’s report will aim to unravel the complexity of the funding sources in California’s curbside and drop-off recycling programs and will explain the different source types of funding for the beverage container components of the recycling programs.