A look at the factors that drive &ndash; or derail &ndash; recycling at large convention centers.

You blow into town for a convention. You work hard for three or four days, maybe play hard too. And you generate a fair amount of waste. What happens to it once the lights are turned off and you exit the exhibit hall?

It’s a mindset,” she says. “I don’t think a lot of these centers spend a lot of energy or concentration on it. And it does vary with the infrastructure; some cities just don’t have it.” 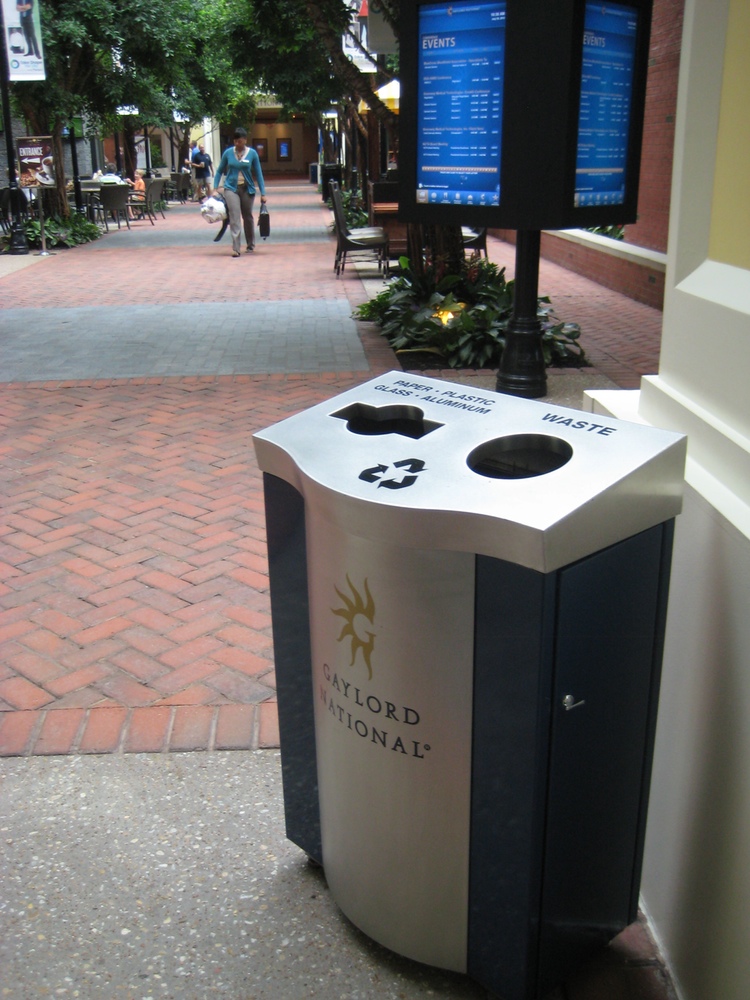 Gaylord Hotels, with properties in cities around the country, selects “Green Teams” to emphasize sustainability issues. Heading the Green Team at the Gaylord National Resort & Convention Center in Washington, home of Wastecon 2012, is Monroe Harrison, director of public affairs for the hotel. The Gaylord National generated 4,375 tons of waste in 2011 and recycled 14 percent. The facility has set a goal of recycling 25 percent of its waste this year.

The Gaylord National’s recycling program includes 18 strategically placed front of house recycling bins and back of house recycling baskets in each office and cubicle. It operates energy conservation programs as well. The facility owns six waste compactors, with three dedicated to recycling.

The Gaylord National is located in Prince George County, which offers single-stream recycling. The hotel staff doesn’t do any source separation; the unsorted recyclables go to the county recycling center. “As long as we capture the paper, plastic, aluminum and glass together and we take that from the hotel to the proper recycling compactor, we’re meeting our goal,” Harrison says.

“It is a challenge to make sure that show management and delegates understand that we are a recycling facility,” said Taryle Spain, director of client services for the center, in e-mail responses. “Having the material sorted off-site means that it is more convenient for our visitors to participate.” 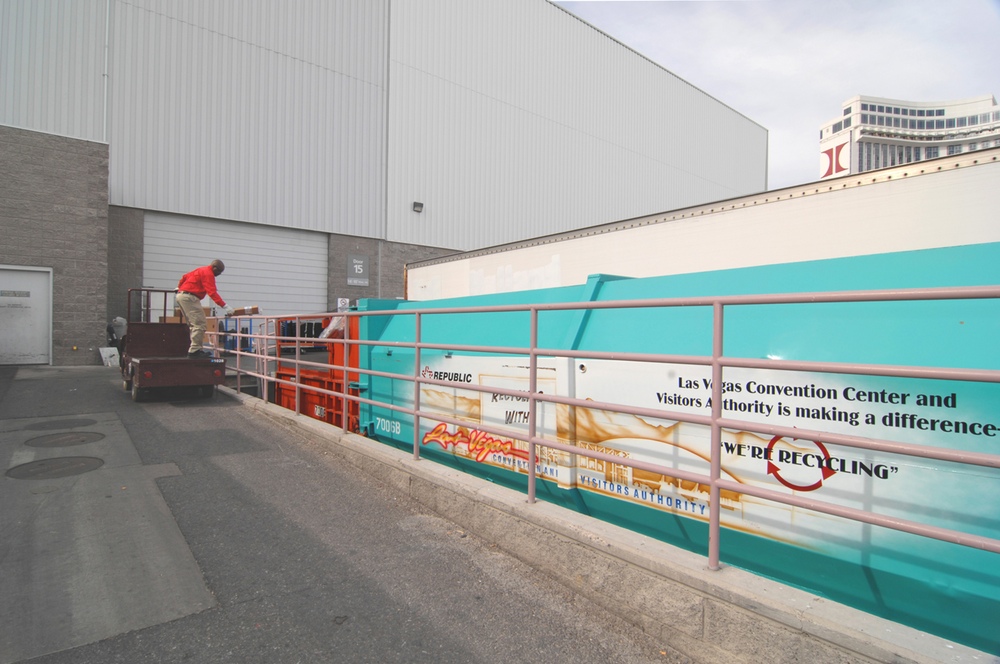 The Las Vegas convention center operates other green-minded programs besides its material recycling collection. It employs a crusher to recycle fluorescent lighting, installed water stations instead of providing bottled water, uses environmentally friendly cleaning products and has converted most of its vehicle fleet to run on either electricity or natural gas.

The center also works with Repurpose America, a non-profit organization in North Las Vegas. The organization has helped the convention center divert non-recyclable materials such as large shipping crates, which are made into garden containers, and show banners, which are converted into badge holders, says Zachary Delbex, CEO of the organization. In the last five years Repurpose America has diverted about 7.5 million tons of material, according to Delbex.

The efforts have resulted in a recycling rate for the Las Vegas facility of about 64 percent, says Spain, adding that for some shows, the figure can top 90 percent.

That broad fluctuation of recycling rates is not usual, particularly for convention centers. “The amount of waste generated from different shows can vary widely,” says Harrison. “Some groups are definitely more environmental than others.”

The Gaylord National doesn’t play host to a lot of manufacturing shows, instead housing more office and retail-type exhibitions: government, pharmaceuticals, pet stores, paper, military. “The military is so meticulous about leaving the site in better condition than when they found it,” says Amie Gorrell, director of public relations for the Gaylord National.

The biggest challenge Harrison says he faces is that several times a year exhibitors leave materials and products behind. In those cases the Gaylord National convention service manager works with the group’s meeting planner to select a charity to give the items to “and keep them from going to the landfills,” Harrison says.

Before larger conventions begin Harrison’s team meets with the guest organization and determines what materials might be left behind. “We have a pretty solid game plan going in.”

Both during setup and tear-down the Gaylord National has one of its managers working the compactor to make sure material ends up in the proper place, and the staff works with the customer “so as little waste goes into the building as goes out.”

Taking a Bite Out of Recycling

But while convention centers and meeting operations have made progress in some areas of waste reduction, Spatrisano sees lots of room for improvement. One convention center she declined to identify by name recently wanted to charge a customer she was working with to provide sufficient recycling bins for the meeting group. She notes that this was in a city with an aggressive diversion rate. “Cities make these ordinances and then don’t have a way to police them.” 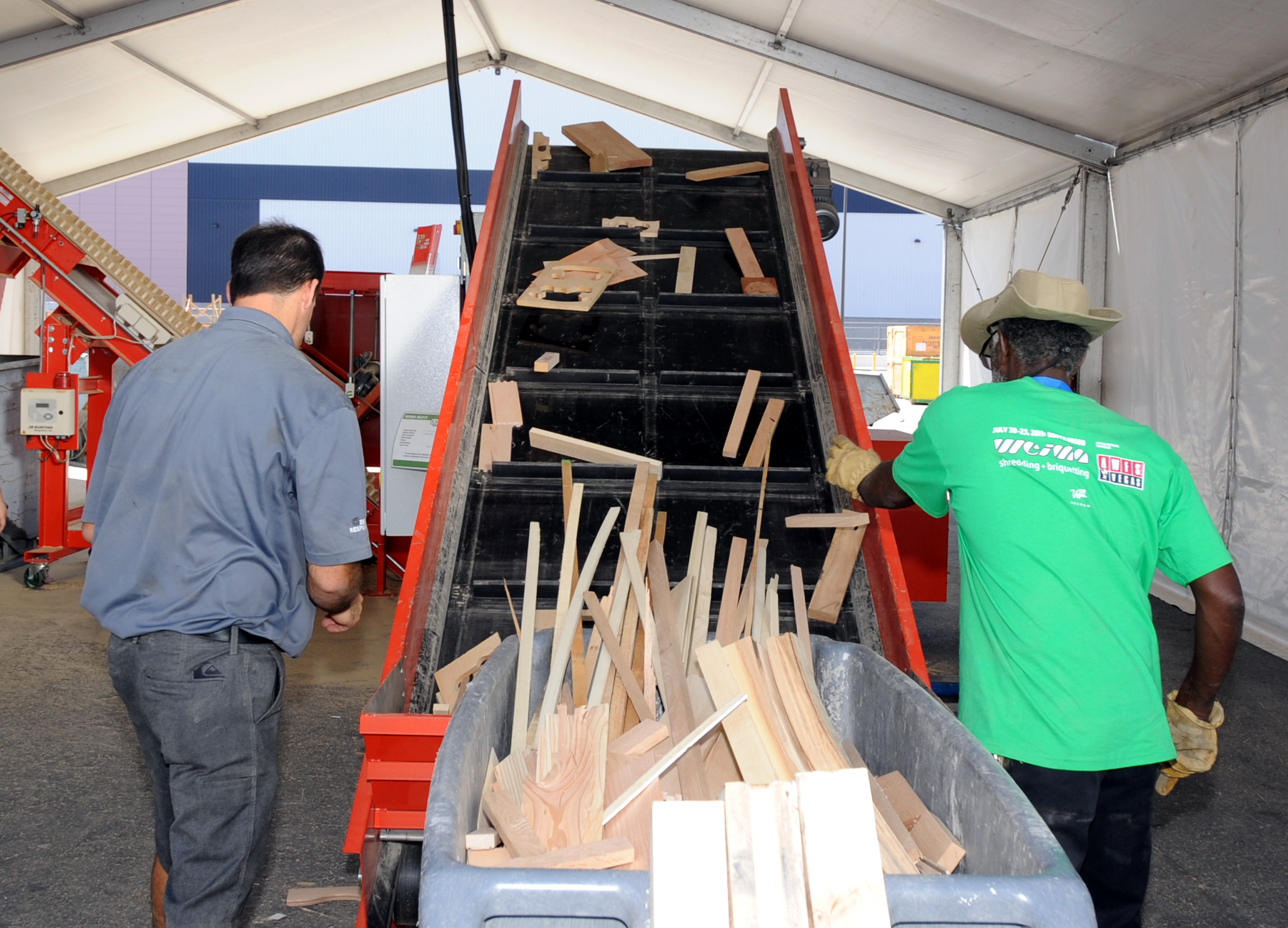 Spatrisano says she is consistently surprised that convention centers and planners don’t look for more creative ways to minimize their waste. Regardless, both parties’ good intentions often run smack into economic reality when the local landfill tipping fees are low. A general manager of three large properties in Georgia told her,  “’Why should we care about the waste? We pay less to take it a landfill.’”

“He had a point,” Spatrisano admits. “If you don’t believe in it fundamentally and don’t see the economical value, then what’s the motivator?”

She says composting is another factor not adequately considered with convention recycling. “Food waste is a big part of the waste stream. If you can take food waste out you can get higher diversion rates.”

And there’s a lot of confusion about those rates. Spatrisano says her group worked with an association that held an event in Florida that claimed a 100-percent recycling rate -- “which isn’t even possible, not in anything we’ve ever seen. The recycling facility there couldn’t do it, and there was no composting.”

But she sees it as a learning curve, noting that some operations are making great strides. For example, MeetGreen worked with Chicago’s McCormick Place a few years ago, when the center boasted a paltry 5 percent recycling rate. MeetGreen got it up to more than 80 percent for one event. “It’s possible, but the waste programs have to be manageable.”

At the Las Vegas Convention Center recycling has become more of an expectation, says Spain, but the level still varies depending on the organization hosting the event.

Harrison says more and more meeting planners are asking about green initiatives at the Gaylord, from waste to energy to the availability of locally grown produce. They’re seeing thumb drives replacing brochures and even scannable digital badges to get information, instead of thick packets of printed material. “It’s just part of the industry now, how to be more sustainable.”

Spatrisano sees more inconsistency. “Part of the challenge is we go in, and then they go back to business as usual after the event,” she says. “They need to keep it in place for them to see the financial benefit.”

But she’s keeping the faith. “There’s lot of potential, lots of opportunity.”

Allan Gerlat is news editor for Waste Age and waste360.com