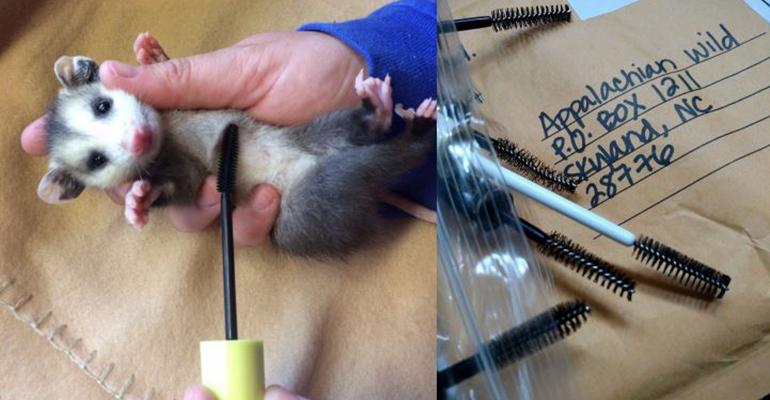 The refuge, which receives donations from around the world, uses mascara wands to help care for and groom its rescued animals.

Survey data shows that in 2017, 106 million women in the U.S. used mascara. While most people might not think to recycle after using this beauty product, at the Appalachian Wildlife Refuge in North Carolina, discarded mascara wands are being put to good use.

The Wands for Wildlife campaign took off after Savannah Trantham, Appalachian Wildlife Refuge co-founder and wildlife rehabilitator, posted on her personal Facebook page asking for discarded mascara wands. Since making the post public, it has been shared 59,000 times, resulting in a steady stream of donations from around the world.

The refuge uses the mascara wands to care for the rescued animals. “The wands have many uses, including removing fly eggs and larva from feathers and fur of wild animals; grooming an area on an animal to remove dust, dirt, sand and sawdust; assisting the wildlife rehabilitator in examining for injuries; and cleaning the syringes used for feeding the animals,” says co-founder Kimberly Brewster. “They work great because the bristles are soft and so close together, and they reduce the risk of potential injury to tiny patients, especially squirmy babies.”

Prior to donation, the refuge asks that the wands be cleaned with soap and warm water to get the residual mascara off, and then dried before mailing. At the refuge, wands are further disinfected before being used on patients.

From individuals who drop their clean wands in the mail to school groups and Girl Scout troops, donors have really jumped on board with the program. “They have come in from every state in the country and from around the world including Canada, United Kingdom, Australia, Germany, France, Sweden and more,” says Brewster.

In addition to individual donors, the organization has been the recipient of corporate donation programs. Brewster says it has received shipments from salons, department stores and makeup companies, for example. One such company, wet n wild, has stepped up in a big way.

Launched in 1979 as a “cruelty-free” brand, wet n wild announced that with the release of its new Lash Renegade Mascara, Avenging Amethyst, it would support the Wands for Wildlife program. A portion of the proceeds ($1) of every Lash Renegade Mascara will go directly to the refuge. “Our goal is to collect $10,000 by the end of August,” wet n wild’s Senior Vice President of Marketing Evelyn Wang states in the company’s outreach video.

With purchase of any wet n wild mascara shipping within the 48 contiguous states, customers will receive a prepaid return label that can be used to return mascara wands to the company. Customers can also request a return label without a purchase.

Corporate partners also have shown their support by making monetary donations or hosting Wandraiser events with their employees, where they collect wands, donations and items from the organization’s wish list to feed, treat and help the animals, says Brewster.

Such a small piece of waste can make a huge impact. Now, the co-founders at Appalachian Wildlife Refuge hope the word keeps spreading. “This was a complete shock to us and shows the power of social media. It also shows how much people want to help,” says Brewster. “We have been sharing with those in our network, and we are working to set up a distribution program so we can send wands to wildlife rehabilitators and facilities beyond our region.”