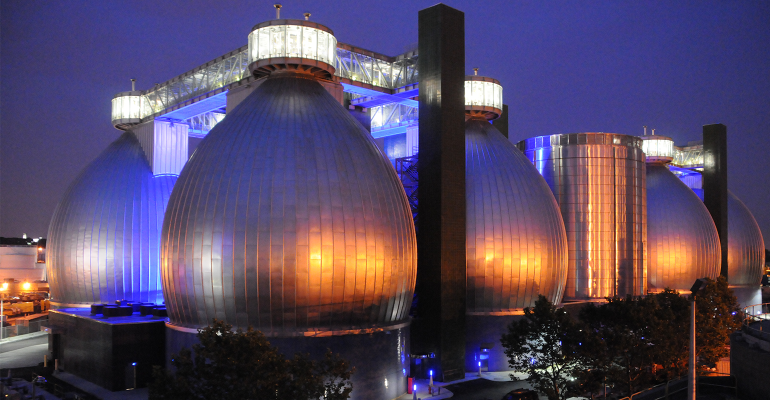 DEP’s Newtown Creek Wastewater Resource Recovery Facility has converted sludge to biogas for decades; and began co-digesting it with food scraps in 2016. The city expanded organic waste collections in October 2022, which will eventually translate to the ability to process 500 tons of food waste daily, along with 310 million gallons of wastewater.

This uptick will leave the city with plenty more biogas than it currently uses to heat its eight iconic, egg-shaped digesters and plant. Rather than flare the excess, it will be routed to National Grid for injection in order to heat over 5,000 homes, a project currently in the final commissioning stages.

Waste Management’s primary role is to produce an engineered bioslurry at its Brooklyn plant; a pumpable liquid prepared to ensure that the organics digest well.

Its system, branded as CORe, first removes contaminants (plastic to include packaging, glass, etc.); liquids are blended to make the bioslurry; transported by tanker trucks to Newtown Creek; and pumped into a feed-in station. From there, the material is fed into the digesters at a controlled rate to prevent disruption to the digestion process.

Chris Farley, vice president of Waste Management’s Greater Mid-Atlantic area, describes the bioslurry as an energy shake, with the physical and energy properties designated by the operators at Newtown Creek for increased production of RNG.

“CORe is an outstanding solution for urban areas that want to divert waste from landfills and offset fossil fuel use by generating renewable energy,” Farley says.

Third-party haulers and Waste Management’s commercial customers that generate food waste deliver it to the facility. Customers pay a per-ton fee to dispose of their material there, which Farley says is competitive with landfill tipping fees.

After the decomposing food is loaded into a hopper and processed, the bioslurry is stored in tanks, mixed, and analyzed to ensure a consistent quality before it’s introduced into the digesters.

National Grid built and will operate the biogas cleaning and injection  system on DEP property. Once the utility recovers its costs, it will split revenue from RNG sales with DEP.

“National Grid’s system ties into our existing wastewater treatment process. From an air quality perspective, it’s great because the system takes gas that would otherwise be flared and turns it into a replacement for fossil natural gas,” Gajwani says.

The utility will reportedly be able to reduce its annual CO2 emissions by more than 90,000 metric tons, equivalent to taking nearly 19,000 cars off the road.

“It will play an important role in decarbonizing New York City’s heating system, even in buildings that are difficult or impossible to electrify,” she says.

Accessing appreciative volumes of food scraps, which come from commercial, residential, and school collections, has been work. What came into the city for processing initially hovered around 30 tons day, in time rising to about 70 tons, eventually climbing to just over 200 tons a  day before temporarily dropping to 25 tons during the pandemic when New York City’s Department of Sanitation (DSNY) paused its collection program. Today the plant processes about 130 to 140 tons of food waste a day, on its way up to full capacity.

“Growing a successful organics collection program requires behavior change, and that takes time. We continue to partner with DSNY and private companies such as Waste Management to ensure we are using the system to capacity,” Gajwani says.

She describes the operation as a puzzle with multiple parts that need to fit together, not only pointing to DSNY and Waste Management for their roles in executing a successful co-digestion program but commenting, “We have also needed to reimagine our relationships with other utilities, like National Grid … It’s good to keep food waste out of landfills, but the greenhouse gas reductions we can make are even greater if we’re replacing fossil natural gas with the RNG we make at Newtown Creek. That’s why we’re partnering with National Grid on our gas-to-grid project here.”

There is strong demand for outlets for organic waste, and Gajwani only expects that to grow, adding that with its eight sizable digesters, Newtown Creek stands positioned to take on more.

“We fully support composting and other means to manage organics, but before we start building new facilities, we should use what we already have, and our digesters have large capacity.”

Nonprofit Energy Vision touted this collaborative project at a recent leadership awards reception and said if the Newtown Creek model were implemented at every New York City wastewater treatment plant (it has digesters at all of its 14 facilities), besides recycling volumes of the municipality’s food waste, it could produce enough RNG to replace nearly every diesel vehicle currently powering its municipal fleets.