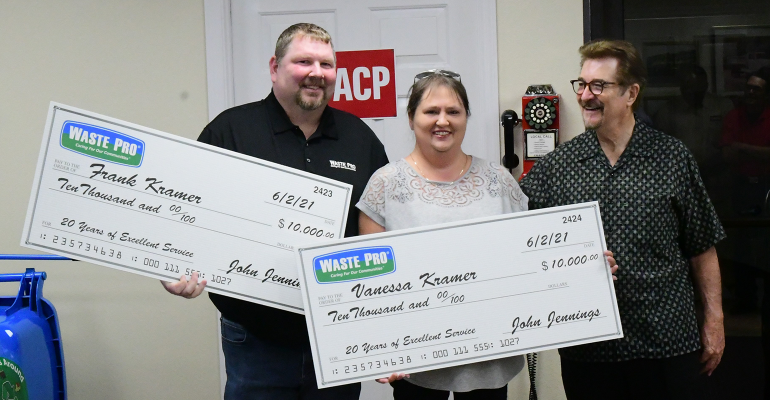 Couples who work well together at home and in the office are few and far between, but for Frank and Vanessa Kramer, they wouldn’t want it any other way.

“We do our best when we’re together,” said Vanessa, Office Manager of Waste Pro’s Lake City Division. “Our kids don’t understand it. They’ve never seen us argue. We work well together, we live together…we thrive that way.”

Frank and Vanessa have been together nearly 30 years and both were among Waste Pro’s first employees. Vanessa joined the organization after Waste Pro bought the previous company that served the area in 2001. She had been working for that company as a temporary employee and didn’t expect to stay with Waste Pro when they took over, but Founder John Jennings saw a spark in her from the beginning.

“To see the company grow from just a couple of trucks to what it is now, it’s amazing,” Frank said. “We put in a lot of hard work in the beginning. Both of us personally have been to multiple divisions to help out as they were first opening up, getting them up to Waste Pro standards.”

Frank, who now only manages Lake City as Division Manager, takes pride in the fact that Lake City was also the first division to restore old trucks and make them like new again – a practice which has spread across the company and has led to more than 150 trucks being given a new life on the roads.

As for Vanessa, while she may not have had experience in the waste industry prior to Waste Pro, it never affected her job or relationships with her coworkers. Her children are sure she was a drill sergeant in a past life.

“I’m five-foot-nothing but I just have that personality, I don’t intimidate easily. I just fit in well with the men,” she said. “There are always that one or two in the bunch who can’t take orders from a woman, but I just stand my ground and they would see I won’t budge.”

In fact, most of the guys call her Mama Ness. Many of them, Frank said, go to her when they have an issue they feel uncomfortable discussing with him.

Over the past 20 years, Waste Pro has become ingrained in their family. Vanessa has been with the company for half of her life; her youngest son was a baby when she started. Of their three sons, two of them have followed in their footsteps. Christopher Costello is a roll-off driver in Lake City, and Nathan Frischkorn is the Division Manager in Gainesville/Alachua. Both started with Waste Pro at just 18 years old.

When Christopher was a child, Vanessa said, he used to come with them to the yard and Mr. Jennings visited him frequently. Mr. Jennings even went so far as to grow a garden outside full of peppers and watermelon. He then made a special trip for no other reason than to cut the watermelon open with him when it was ready.

“It was the worst watermelon you ever tasted,” Vanessa joked, “But the fact that he did that made me emotional. You’re not just a number. He knows my kids.”

Likewise, they have known Mr. Jennings’ son, Sean Jennings, since he was 10 years old; they always saw him riding behind his dad, Frank said. Sean Jennings is now the President and CEO of Waste Pro.

Family is very important to Vanessa, and that is evident in the way they describe working together as a married couple for so long.

“We’ve had maybe three arguments in 27 years, and they were probably stupid,” she said. “You’ve just got to find somebody you like all the time, and you’ll be fine.”

A critical thing for them, Frank said, is turning work off when they need to and going away together from time to time. They enjoy going on cruises and like to do two or three a year.

In June, Mr. Jennings surprised Frank and Vanessa with a $10,000 check for each of them as a thank you for their 20 years of service to Waste Pro.

“I was completely floored and trying not to cry,” Vanessa said. “I don’t know why I was so surprised. John has always been so good at taking care of the people who take care of him.”

The secret, they said, is to simply do what’s right, don’t take things personally, don’t compromise, and treat everybody the same. That’s what Vanessa tells anyone who is looking for a lasting career in the industry – men and women alike.

When they’re not working or cruising together, Frank likes to take out his boat and fish; they both also enjoy simply spending time with their family.

“There are only three things you need to know about me,” said Frank. “Number one: family, number two: Waste Pro, and number three: go Steelers!”