USP Talks “Getting to Zero Waste” During Inaugural Forum 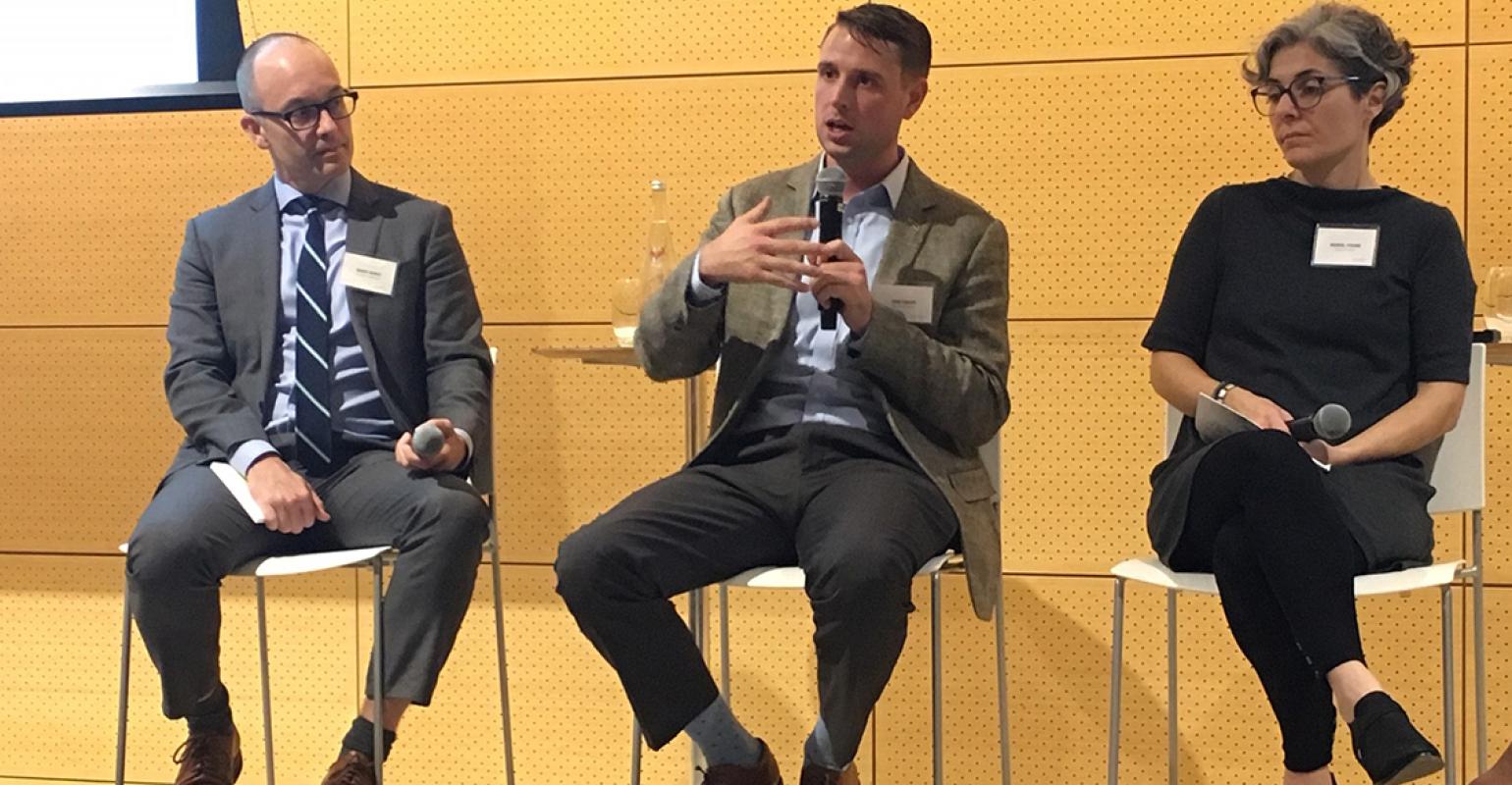 Union Square Partnership held its first-ever forum at The New School’s Starr Foundation Hall. Here’s a deeper dive into some of the highlights from the event.

In New York City, commercial buildings alone generate tons of trash—more than 3.5 billion tons a year. That’s according to Ushma Mehta, co-founder of ThinkZero, a waste reduction and diversion company that conducts waste audits. Mehta moderated a panel discussion about transforming the office space and wasting less at work during a waste reduction forum on October 15.

The forum, “Getting to Zero Waste,” was hosted by the Union Square Partnership (USP) and was the organization’s inaugural event on waste reduction. The forum was held at The New School’s Starr Foundation Hall in New York City.

In addition to the panel discussion on reducing waste in workspaces, a group of food experts from a few of the area’s restaurants revealed some of the sustainable tactics they’ve implemented to help reduce food waste. Here are some of the key takeaways from both panels.

Wasting Less in the Workplace

During the panel titled “Transform Your Office and Waste Less at Work,” Muriel Poure, facilities services sustainability specialist at Eileen Fisher; Erik Eibert, assistant director of sustainable initiatives at The New School; and Geoff Hurst, sustainability manager at Related Companies, divulged what worked best for their companies, as well as some of the challenges they faced when the time came to execute waste reduction efforts.

At Eileen Fisher, Poure has been working on transforming the company’s recycling program over the past two years. It started when she attended her first zero waste conference and realized that though there was a recycling program at Eileen Fisher, it wasn’t working. The company had bins dispersed across its offices, but the bins weren’t set up in one place, and employees were confused as to which bin to use for waste, recycling, composting, etc.

Poure ended up developing an itemized system to sort the company’s waste in a straightforward manner for employees. Now, all bins are labeled and color-coded, so employees know where to discard their trash, recyclables, food waste, etc.

“Zero waste is real; it can be achievable,” said Poure. “And especially at Eileen Fisher, knowing my company has a big sustainability goal, I wanted to bring that to the people around me every day and show people that we all have our place. And every change that we make, even if it’s a little change, can have a big impact.” 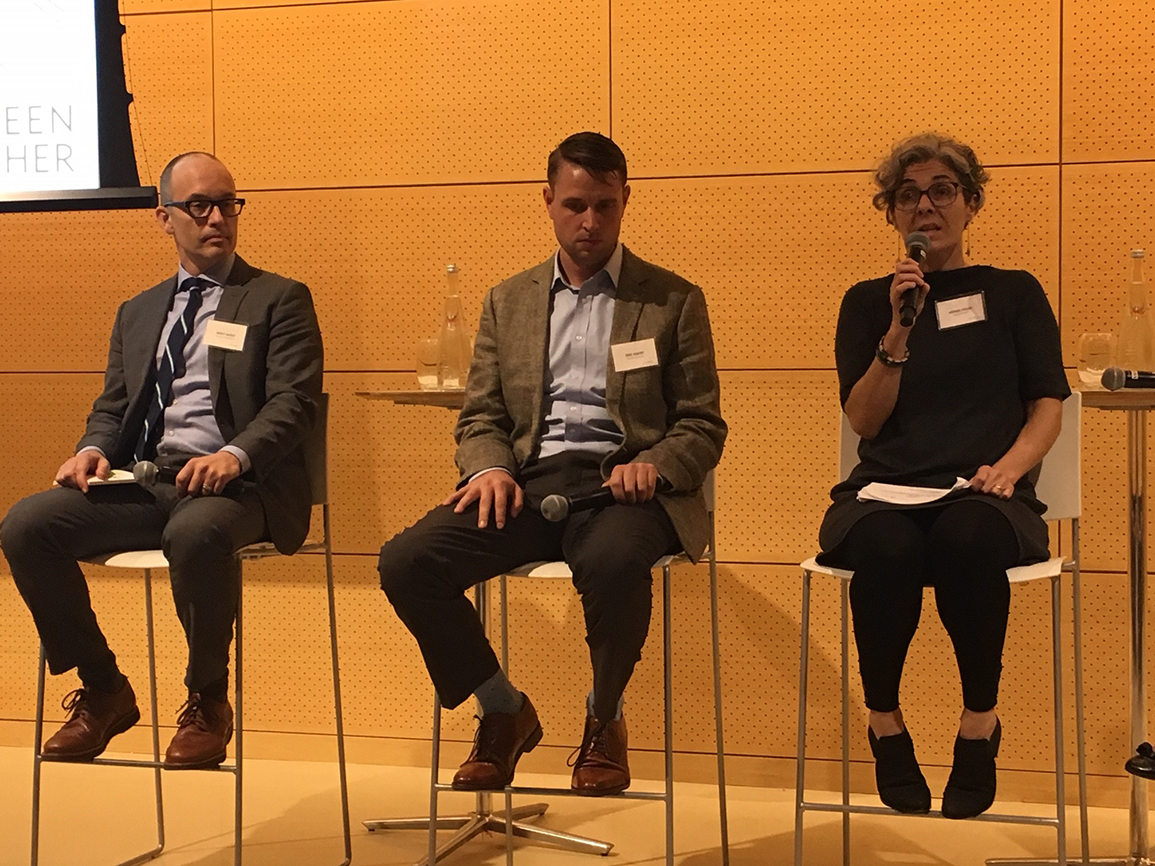 Eibert has been working at The New School for about three years, and he focuses on sustainability in energy, water and waste. About a month after he started the job, he began receiving monthly reports that analyzed traffic to the school’s webpage. Eibert noticed about 80 to 90 percent of all the interest was going to the site’s waste management page.

When it was time to renovate the school’s waste reduction efforts, Eibert noted the approach was two-fold: The design of the school’s waste signs, which were developed by Parsons School of Design, and measuring and quantifying the waste generated.

“We did a lot of speaking with students, surveying them and trying to understand what sorts of problems they had,” he said. “We realized there was a lot of confusion on what was supposed to go in what bin. It’s really important to make sure all the signs have really obvious and clear color coding. That’s made a really big impact, and we’re starting to see that in some of the feedback that we’re getting.”

To measure its waste, the school focused on quantifying and really examining the data. Eibert studied the amount of compost generated, what went to recycling and how much waste went to landfill.

“That was not an easy number to get—it’s an estimate based on city pickups and spot checks from our waste haulers,” explained Eibert. “But it starts to tell story that is pretty accurate and helps us quantify our waste.”

As the sustainability manager at Related Companies, Hurst said when it comes to reducing how much waste the company’s multi-housing and business projects generate, one thing the company didn’t do until recently was consider this at the beginning of and throughout the design process.

Now, during the design process, Hurst and his team formulated the company’s owners’ project requirements to include some waste reduction strategies. Hurst noted it involved some rudimentary auditing to see what types of waste volume these projects were emitting.

“It helped us realize that our storage facilities were undersized in almost every case,” he said. “We developed sizing guidelines and looked into using multiple collection chutes for our multifamily buildings. We are now putting in two or three chutes, so our residents can put everything down the chutes into central storage. We also added a basic program for clothing, e-cycle, e-batteries, all these things that you just have no place to put in your house and workplace. All of that becomes part of what our architectural team puts into the building process.”

“Wherever we can, we are trying to make people aware of how much waste they’re generating, as well as how much they are contaminating,” added Hurst. “And hopefully it will reduce waste and improve recycling rates.”

Changing the Game in Foodservice

From farm to table and beyond, most of the food produced in this country goes uneaten, explained Christina Grace, CEO of Foodprint Group, during her initial comments before moderating the forum’s second panel.

“This is a big issue,” stressed Grace. “Every year, we throw away enough disposable dishware and plastic to circle the planet 300 times. We’ve got a task ahead.”

She said New York City produces 8 million tons of waste every year and has a goal to divert 90 percent of that waste from landfill by 2030. “And it’s daunting—it’s daunting, but it’s doable,” added Grace.

Grace then turned to the three panelists to explain how their establishments have put food waste reduction efforts into action. 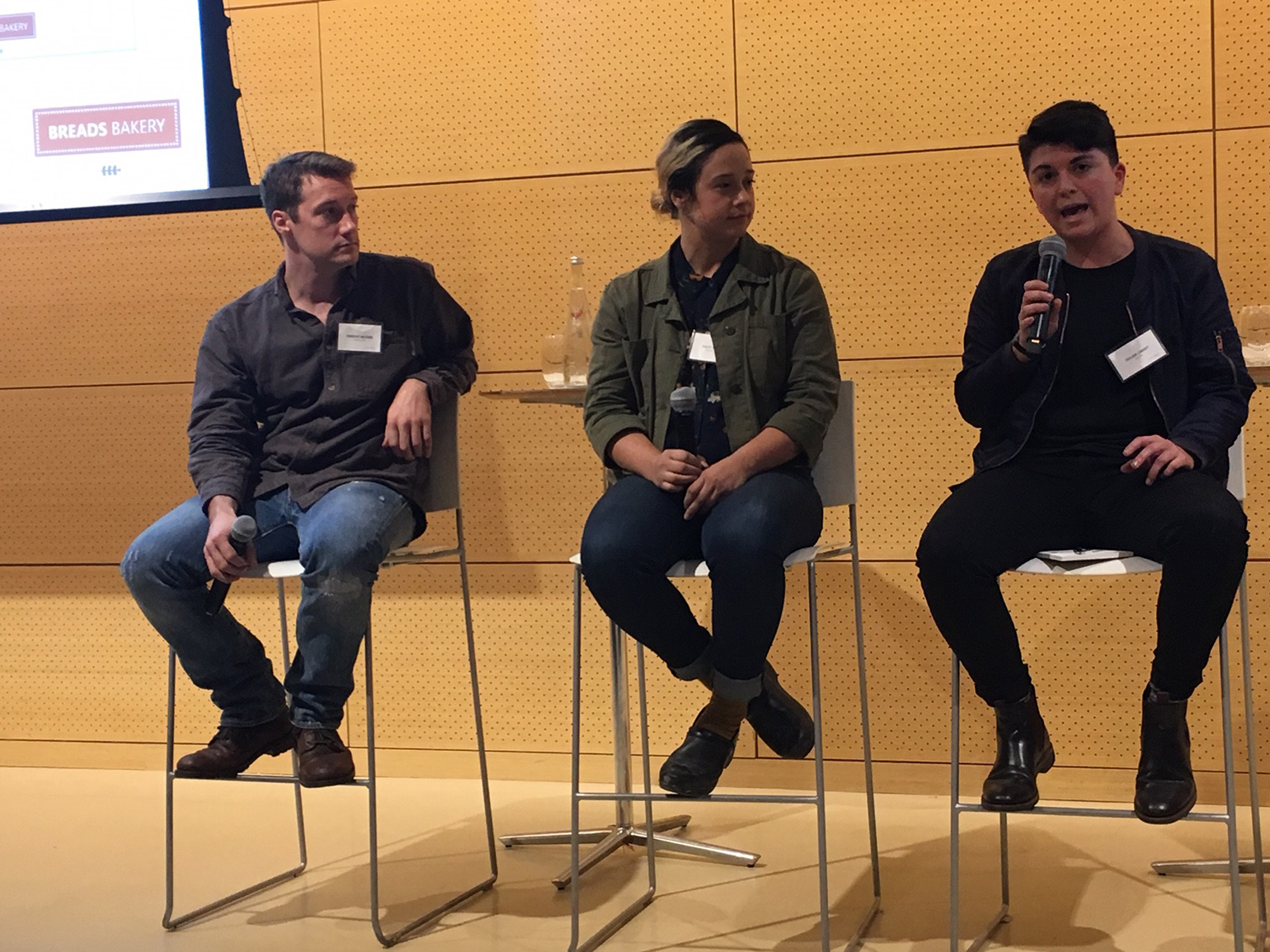 Timothy Meyers, the executive chef at Bocce in Union Square, explained that though there is still a lot of work to do, he tracks and reuses food in the kitchen that would otherwise have been discarded. “It is pretty easy for me to track if there is food waste in my kitchen by creating a menu made from items that otherwise would have been thrown away,” he explained.

Kelly Jacques, operations manager at Breads Bakery, noted zero waste efforts are deeply engrained in the bakery’s personal values. The bakery sends out food to be repurposed into materials like compostable straws and cutlery. Jacques noted the bakery also focuses on using local ingredients and puts a great deal of emphasis on staff training.

“It’s these micro-decisions made by every employee and every customer that ultimately determine our success,” said Jacques. “I think when you get into the food industry, at least some part of you is driven by an urge to feed people and to provide a positive experience for somebody. And I think we’re going into it [as a whole] with a contradiction by wanting to do that but not considering the environmental impact.”

Taylor Lanzet, director of supply and sustainability at Dig Inn, explained that over the past few years, the restaurant’s journey to zero waste has put its initial focus on upstream work, meaning sourcing and utilizing non-fine dining appropriate vegetables and items that most chefs otherwise wouldn’t want. She said Dig Inn’s goal is to create a market for imperfect food items that aren’t necessarily aesthetically pleasing to others—think leafy greens with bruises and torn leaves from being out in a wet field.

“The second part of our effort has really been around food rescue at the end of the day and giving back to the food pantries,” explained Lanzet. “It’s really about donating those local vegetables and high-quality proteins to food insecure communities.”

Asked what a zero waste menu means to him, Meyers said it could be challenging because inventory management falls on the line cooks, who are typically younger, college-aged people.

“It’s about teaching the cooks what we’re doing,” he noted. “While the philosophy is holistic, it doesn’t have to be lofty. There’s no fancy culinary technique here. We just want this to be good for us and the Earth.”

And then there’s the challenge of packaging at these establishments. All three panelists cringed when they heard the words “packaging” and “disposable dishware.”

“Packaging is the worst,” Lanzet quipped, noting that is where Dig Inn is currently investing a lot of its funding and brainpower. “Packaging is really hard because we still need it. If you have really bad packaging, you kind of come across as a monster, and there aren’t really any scalable options out there. We need more scalable packaging companies that make sense.”

Jacques also said packaging was one of the biggest challenges to overcome because compostable containers can’t hold a wet salad. Plus, many containers have a recyclable top and compostable bottom, which ends up confusing people.

“I think this is something where industry can have a big impact,” she added.

Since Bocce makes a lot of pizza, Meyers explained the restaurant has incorporated using pizza boxes made from a certain percentage of recycled post-consumer product. He added that when Bocce sets up a pizza truck or holds events in Union Square, he refuses to give customers a pizza box if they are eating their food onsite. Instead, he uses paper plates for personal pizzas.

“There are a lot of options, but there are few of them that make feasible sense,” he said. “Until we find something that works, we are making sure we are sourcing as best as we can. Portion control can also help prevent food waste.”