Student Rounds Up Mega Volumes of Spent Markers for Reuse 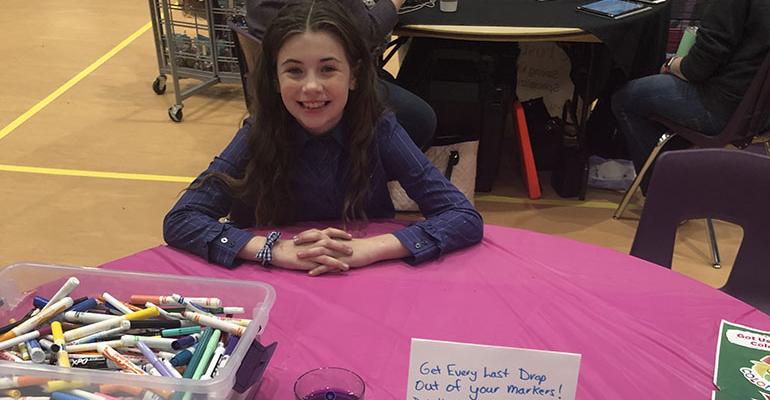 In just over two years, 12-year-old Joslyn Stamp has collected more than 12,000 markers, diverting them from landfill and helping to make fuel.

When 9-year-old Joslyn Stamp stood at the front of her classroom with a proposition for her 20-some fourth-grade peers, she was nervous and unsure if they would get behind the environmental project that she wanted their help in pulling off.

But not only did they buy into her idea, so did her whole school. And then three more schools got involved, as did other folks in her Bellevue, Neb., community—from toddlers to seniors—who support her work to help clean up a trash problem.

Joslyn, who is now 12 years old, collects spent markers and mails them to Crayola, which pays for shipping. Through its ColorCycle initiative, the brand sends the markers to waste-to-energy facilities where they are made into electricity, or they go to processors to be repurposed into wax compounds for asphalt shingles and road asphalt.

In just over two years, Joslyn has collected more than 12,000 markers, diverting them from landfill; they are turned into steam to run generators to create electricity for the grid.

“I wanted to find ways to help our earth. I did not want the planet to turn into a giant landfill, and I was worried about animals losing space and eating trash,” says Joslyn, who did chores to make money for bins in each classroom as well as a community bin that she painted with rainbows, recycle symbols and other catchy art, like markers inside beakers.

“It was such a different idea. I don’t think a lot of people recycle markers and some of the other [art supplies] Crayola collects. But we use a lot of them at our school that were getting thrown away. We went through so many Sharpies in art, dry erasers the teacher uses and markers for different projects. It was a convenient way to deal with all of them,” she says. 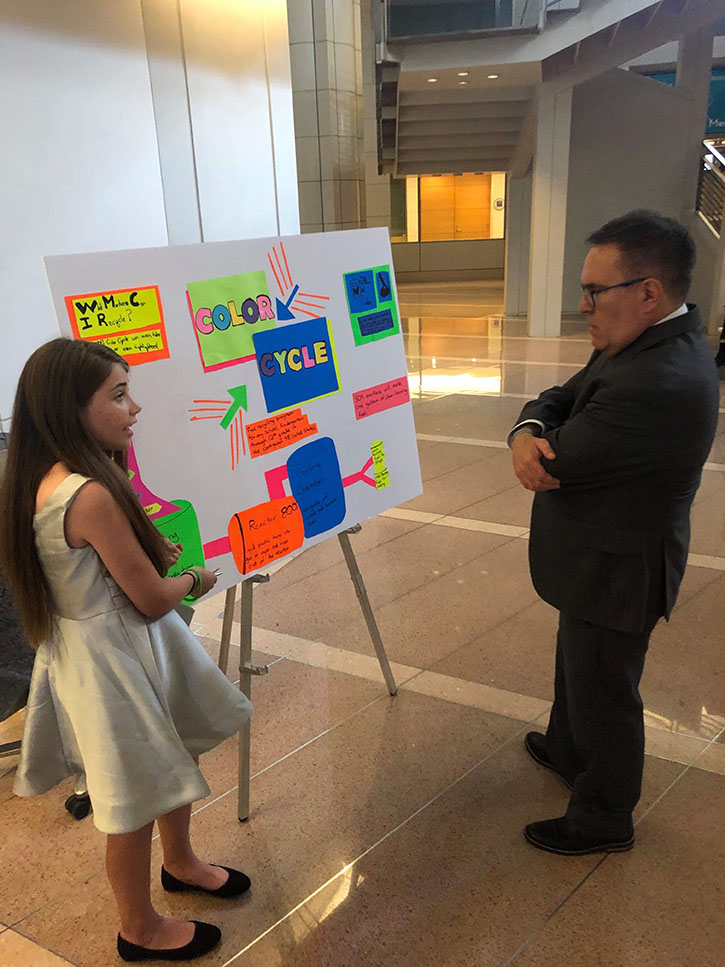 When Joslyn told her classmates what she wanted to do, they were confused but fascinated.

“They thought it was crazy that markers could be turned into fuel, and they wanted to know more about it,” she says.

Their fascination quickly turned into something else.

“They got super excited, and we got 100 markers the first day,” she recalls.

Joslyn and her peers take turns toting the large community bin from class to class to round up the accumulating spent materials.

Remembering her jitters that day she first pitched her idea, she says, “I thought it wouldn’t lift off. But still I was shooting for 1,000 markers. When [the kids] started telling me this is so cool and asking what they can do, I knew it was going to become a thing in my school. I was overjoyed but had no idea it was going to go further,” she says.

At first, she got people she knew, like the school librarian and town librarian, to put out bins. But the momentum spread. And soon the hairstylist of her mom, Margaret Stamp, got her “mothers of preschoolers” group to collect markers where they meet.

“The preschoolers color a lot, and when they’re done, they put the dead markers in the bin. I’m so proud of these little kids for cleaning our world because they are our future,” says Stamp.

When a former teacher of hers transferred to another school, her first graders there adopted their own pet project, grabbing markers from kindergarten through sixth-grade classes. Then, once Joslyn’s story hit the local media, a teacher from another school tracked her down through her mother to learn how to get the program going.

Joslyn now collects from four schools, the local 4-H Club extension office and at Bellevue’s annual Earth Day celebration. Her brightly painted bin, huge banner and rainbow pencils have become an attraction there. She’s collected about 1,000 markers at each of the past two events.

Bellevue City Councilman Don Preister saw to it that Joslyn got a booth at the Earth Day celebration. With allures such as a fashion show where youth model clothes they make from trash and an electronic car show, the event draws a good-sized crowd.

The Crayola markers are among a growing number of recyclable items collected there.

“What Joslyn was doing was a perfect fit because we want to give people hands-on opportunities to make an impact on the environment. Joslyn offers a ready-made program. You just save markers, bring them in and she takes care of getting them recycled,” says Preister.

Kirsten Wood, the children’s librarian at Plattsmouth Public Library, learned what Joslyn was doing from Stamp, who asked if her daughter could leave a bin there.

“I said absolutely. We go through a lot of markers. I myself use them for story time,” says Wood.

Joslyn empties one midsized bin every couple of months. But, says Wood, “When you consider we’re a small town, it’s a good amount. Joslyn gives people the opportunity to participate from our little corner of the world. And for kids, it makes it more within their reach to see a goal they can help work toward along with a lot of other people.”

After Joslyn picks them up from each location, she counts them, packs them and ships them to Crayola.

“Sometimes, I have my sister Maggie help me count because she’s seven and it helps her practice her math, plus she’s becoming aware of the environment,” she says.

It’s about priorities, Joslyn says of the Crayola project, which builds on other ventures of hers. She’s one of two students selected nationwide as an ambassador with the National Park Trust, educating kids about the value of national parks. She also blogs about the environment, writes for Sports Illustrated KIDS and saves money to adopt animals from wildlife organizations.

“I’d rather be doing this [Crayola project and the others] than be on my phone or gaming. And I don’t watch a lot of TV because I don’t feel like I’d be doing anything to help anyone. If you are doing something more productive, you have become a better person,” says Joslyn.

Through Crayola’s ColorCycle, kindergartners through 12th graders across the U.S. and parts of Canada collect Crayola markers. On its website, Crayola describes the program as an opportunity for teachers and students to explore eco-friendly practices. Specially developed lesson plans are available to guide instruction and promote class discussions.