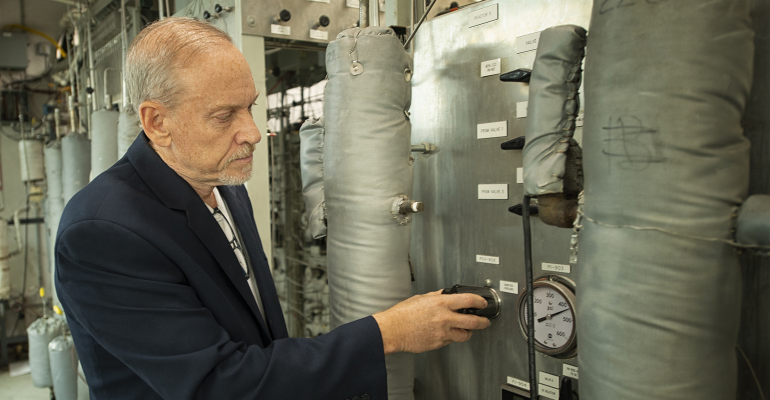 Energy tech company Emerging Fuels Technology (EFT) has developed a platform to make renewable diesel and sustainable jet fuel, beginning with carbon monoxide (CO) and hydrogen (synthesis gas), which are used as building blocks to make synthetic crude. The gas is polymerized via Fischer-Tropsch (a chemical reaction) to a hydrocarbon, which can be upgraded to a product to meet industry specs.

The core technology, which works with multiple feedstocks, can be used to make waxes or other specialty nonfuel products, but EFT’s focus is on the fuels— and on more than just selling rights to the technology.

“We signed several licenses with project developers, but we decided we want to build, own, and operate projects. And we focus on two platforms: Flarebuster and BioGTL (gas to liquids),” says Kenneth Agee, EFT founder and president.

Flarebusters are designed to turn flared gas into transportable fuel rather than have it take its toll on the environment.

“There is enough gas flared globally to make over a million barrels a day of products. It’s a tremendous waste, and the carbon and methane are going into the atmosphere. So, we want to reduce greenhouse gas emissions, produce clean-burning products, and generate profit for our shareholders,” he says.

Flarebuster, which converts gas to liquid fuel, is designed to operate primarily in remote locations where oil and gas production is occurring; and where there is no pipeline. The equipment can be skidded to be trucked to remote locations to make the liquid fuel, which is easier to transport than gas.

Gas is about 600 times the volume of liquid and would have to be compressed and put in a tank to move in the absence of a pipeline, so converting gas to liquid makes transportation easier, explains Agee.

He is also targeting potential clients with surplus gas where there may be a pipeline, but it is not being accepted.

“In the U.S. there is a lot of gas volume, but what we found when we looked for Flarebuster sites is that a lot of [operators] have shut in gas,  meaning they have excess volume that the gas pipeline won’t take. We see an opportunity to build several Flarebusters in the U.S. with partners with that problem.  The Flarebuster provides the opportunity to convert shut in gas to products that are marketable,” Agee says.

The other platform, BioGTL, facilitates the same process as Flarebuster but with different feedstocks, such as landfill methane, anaerobic digester gas, or water treatment plant biogas.

While targeted Flarebuster end users would be gas generators, the BioGTL customer could be an offtaker, such as an airline.

“Airlines are looking for sustainable aviation fuel, and that is a good fit for our BioGTL because the chemical composition of what we synthesize makes good jet fuel. There is an ASTM specification for it that we can meet, so we can make a spec product that can blend into jet fuel,” Agee says.

EFT has already partnered with carbon-conversion company Twelve to make jet fuel from carbon dioxide (CO2) for an Air Force pilot. It’s been delivered, tested, and proven out, says Nicholas Flanders, CEO and co-founder of Twelve.

The product is a blend of 50% renewable and 50% conventional jet fuel, which can be dropped directly into existing engines.

Twelve, based out of Berkeley, Calif., developed the process to convert CO2 into CO, which involves CO2, water, and electricity. The electricity breaks apart the CO2 and water, and Twelve uses catalysts to recombine the elements to make new products.

One product Twelve makes from its process is syngas — the mixture of CO and hydrogen that EFT uses to make liquid fuel.

“What’s unique about what we do is by making fuel from CO2 it is carbon neutral. We are taking CO2 from the air, capturing it at the point of emissions. And we are turning it into useful products. This is a new way to make syngas where historically it has come from other sources like fossil fuels or gasifying municipal solid waste,” Flanders says.

“We would sell the RINS, which are worth more than the fuel. And now Congress is considering a blending credit for sustainable jet fuel. You might sell jet fuel for just over $2 a gallon, and currently a RIN is worth over $5 per gallon,” Agee says.

A potential drawback is that these plants are small—BioGTL plants generate about 60 barrels a day (as opposed to 500 barrels a day produced via Flarebusters). So to make the model pencil out economically, EFT would need to build quite a few of them.

In EFT’s favor, the mini-plants can be operated remotely requiring no staff to operate them. Because they are modular, they are semiportable and can be moved to capture what gas is generated where it’s generated.

For Flarebuster, Agee envisions, after demonstrating the platform commercially, taking it to remote locations outside of the U.S.. The company would partner with large international operators such as oil companies with experience in that part of the world.

He hopes to launch the first BioGTL and Flarebuster plants in 2022.

Currently EFT is doing fundraising and in discussion over a number of identified sites. The company would own and operate BioGTL plants and likely have a partner – an oil and gas producer with substantial reserves—operate the Flarebuster.

He sees them as potential partners.

“We need access to capital. And companies that fabricate equipment are potential partners where we would standardize the design and fabricate over and over in order to scale.”