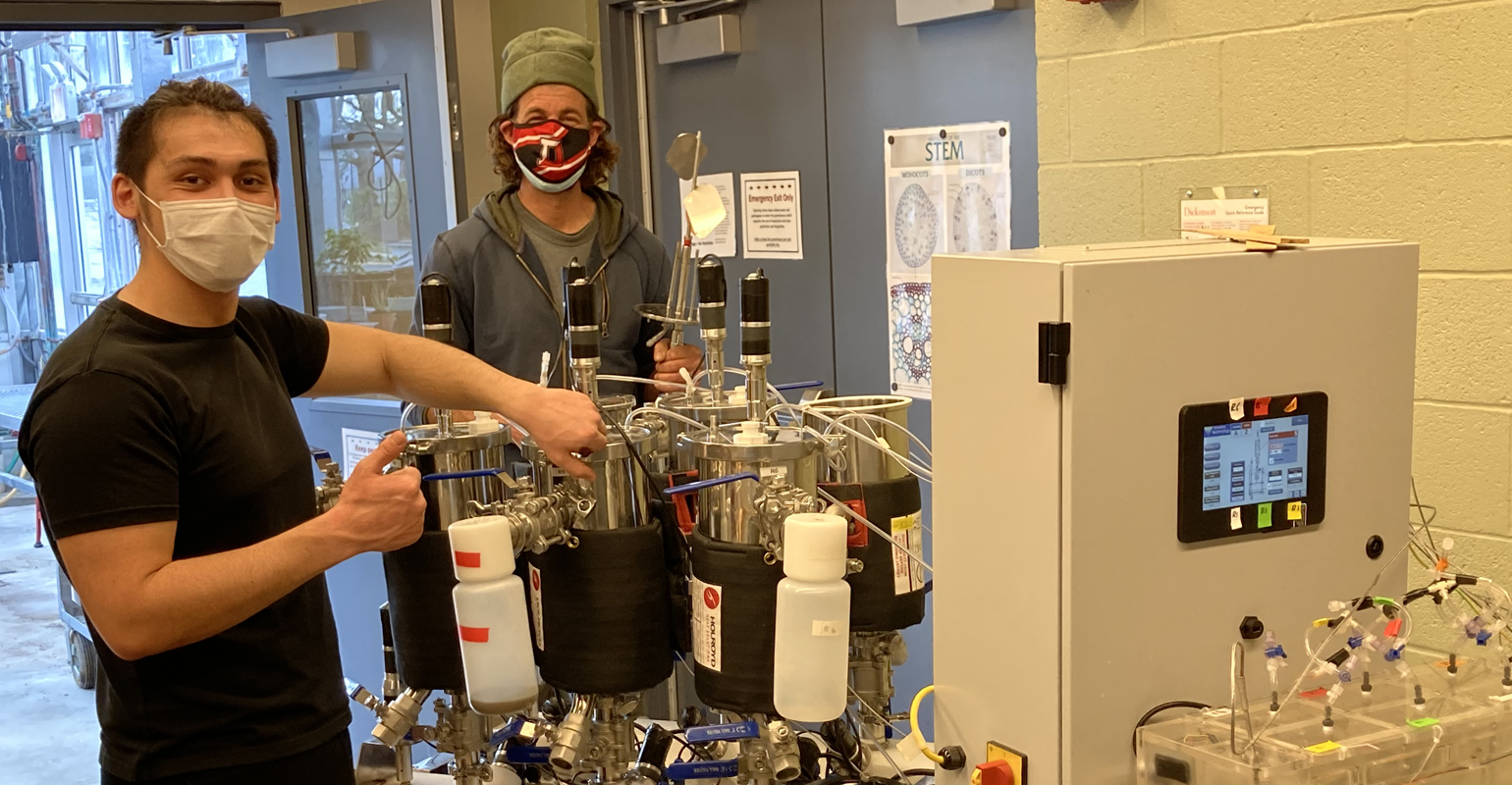 Over 10 years ago, Dickinson College in, Carlisle, PA, began making biogas using cooking oil byproduct as feedstock – and later took their project up a couple notches, increasing the fuel’s energy value by co-digesting cow manure and dining hall food waste. Today, the college known for its sustainable agricultural programs is augmenting with a higher energy feedstock to produce more biogas.  Actually, the investigation into how do scale it anaerobic digestion process (AD) began several years ago, but the work keeps evolving.

“In 2016 we partnered with environmental engineers from Bucknell University who conducted a study of our AD system with the question, what would be the impact of just running on 100 percent food waste?” says Matt, Steiman, Clean Energy manager, Dickenson College Farm.

The pilot showed food waste was an excellent feedstock. There was no decline in production and the pH remained stable.

“From that study we realized biogas from food waste has enough energy to power the whole 90-acre farm where we run the operation, so we could cancel out our electric bill,” he says. The farm consumes about 30,000 kwh electricity a year.

Most recently Steiman and his team added brewers’ grain as a replacement for some of the cow manure. Unlike the grain and campus food waste, manure is not easy to collect; the college crew was having to go out to the farm and shovel it. The grain is simply picked up directly from the brewery. And dining hall food waste is ground in the kitchen with a pulper, picked up daily from the dining hall loading dock, and transported to the farm.

Currently biogas is pumped into bladders and moved around the farm on handcarts for use as cooking fuel.

“This has turned out to be a great use, but the system keeps producing more gas every day, so we realized the possibility of converting it to power so we would not have to worry about storage. And we are working on upgrading the system to make this power at scale,” Steiman says. 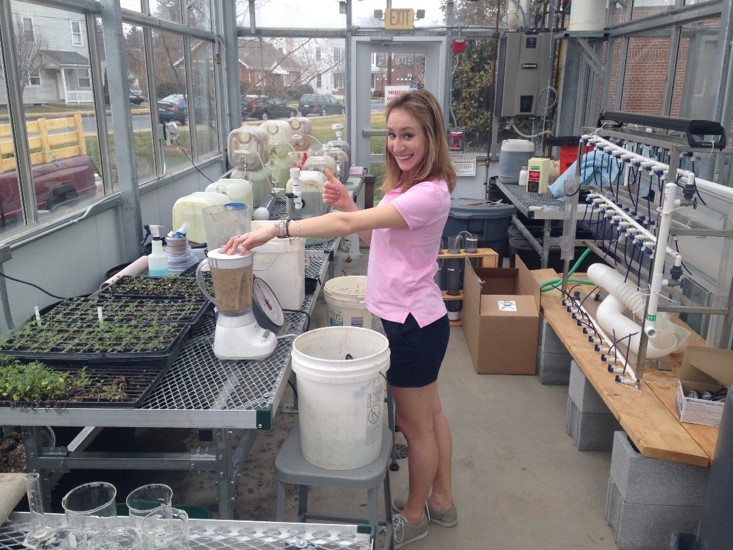 He and a team from Dickinson are now building a project with plans to make mainly electricity with some cooking fuel by early 2022. They anticipate being able to use the same gas line for both fuel types and expect the project will generate over 200,000 kwh per year – not only powering the farm but yielding surplus to export to the grid.

This upgrade will be a 75,000-gallon full mix digester that automatically mixes the liquids. The microbes convert waste organics to biogas and break down the resulting digestate that will be added to a compost inventory.

Dickinson is using some manure as an integral part of the feedstock, partnering with the dairy farm next door who will provide this waste. The farmers will use solids separated from the affluent as cattle bedding. The college and farms will split the liquid digestate for compost or soil amendment.

This new digester is unique in that it’s small, which makes it well suited for Pennsylvania where the average dairy farm has about 100 cows.

“In the U.S. it was thought that you needed a 500-cow minimum for anaerobic digestion. But we found this smaller system, which is built in Belgium, that we will get from Martin Energy Group who is setting them up in the U.S.

We plan to show dairy farmers that with this technology they can modernize their manure management while reducing greenhouse gas emissions and odors. And they can generate renewable energy for their farms and the public good,” Steiman says.

The outreach will include field days for farmers, and Dickinson plans to develop a database of information from its research to help farmers understand the value of different organic waste streams that might be available to them.

Errol A. Huffman, director, Dining Services, Dickinson College, gives  his perspective on the project’s benefit to a foodservice operator:

“Reducing food waste positively impacts both the potential impact on the waste stream and the financial components related to our operations and services.  Where food waste cannot be avoided it is absolutely the right thing to do to transition food to a natural, beneficial contributor,” he says.

The logistics have been fairly easy.

“Throwing food waste in the garbage or grinding up and flushing it into the water supply is no easier than composting [or sending for AD] once the groundwork is laid out properly,” he says.

Huffman’s team moves food waste from customer plates or food pans to  buckets, places the lidded buckets at their dock for pick up by the college farm staff, and the empty buckets are returned each day.

The dining hall’s food pulper reduces the space needed to store the food waste, and further cleans the material. The pulper also accelerates break down of the food in compost and AD systems.

Beneficial use of this waste not only supports the farm but helps kitchen operators too.

“It reduces the nasty cleanup processes required when simply throwing away garbage. It reduces hauler tipping fees and reduces or eliminates fines for fats, oil, and grease. It reduces excess from grinding food, and we rest well knowing the food waste handling process is healthier for all of us, socially responsible, and financially beneficial in the long term,” Huffman says.

Dickinson gets a byproduct of mash used in beer manufacturing from   Molly Pitcher Brewing Co., which is added to the feedstock.

“The grain waste dry is 400 to 900 pounds for one brewed batch. Before we hooked up with Dickinson, we gave it to a local farmer for cattle feed but got out of doing this and had no other outlet to get rid of the grain,” says Tim Fourlas, co-owner/brewer at Molly Pitcher Brewing Co.

“Working with Dickinson fills my need for disposal and helps them get more biomass for their digester,” Fourlas says.

The project serves Dickinson students as well, providing an education, and Dickinson hopes the experience will have long-lasting impact that will resonate beyond the college setting.

“We strive to model practices that students can learn from to apply in their personal lives and in their careers. We educate them in our processes and involve student workers in every step,” says Lindsey Lyons, Dickinson College assistant director, Center for Sustainability Education.

She describes the potential educational opportunities as exciting and innovative.

“These anaerobic digestion systems will provide students with experiential research opportunities that are rare amongst higher education liberal arts colleges. And we are happy to pave the way to this learning.”