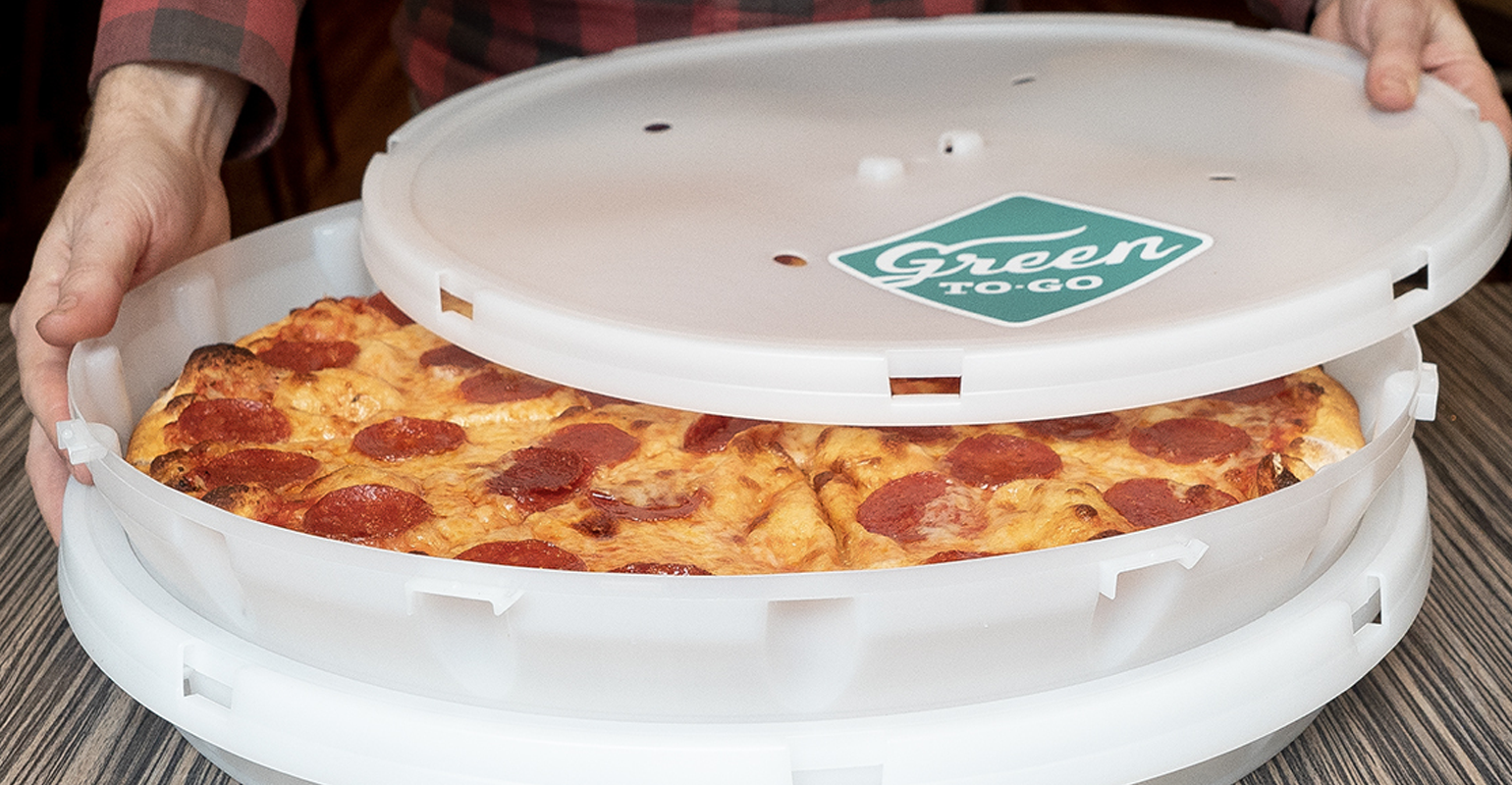 Crystal Dreisbach was a public health researcher when she became troubled by what she saw as a big trash problem: a giant swell of dirty food takeout containers inundating landscapes across the country. When she moved to Durham, NC she decided to do something about it, at least in that one fast-growing foodie town, known for its outdoor festivals and eateries – and for its garbage, which it ships 196 miles to be buried.

Dreisbach launched Don’t Waste Durham to try and lessen the load of food and food packaging waste, and as part of that nonprofit she started GreenToGo, a takeout container reuse system and program.

Participating restaurants get clean clam shells and pizza boxes made of rigid plastic, and their customers pay to be GreenToGo members to be able to pick up their orders in these alternatives to single-use packaging.

“To make a reuse system like this work we had to build infrastructure and a supply chain.  How we did it is we arranged for restaurants to stock and fill the clean containers, and when customers are done with them, they return them to one of 32 collection centers around Durham. From there they are transported to a central facility where they are washed, sanitized, and dried, then returned to restaurants for their next use,” Dreisbach says.

The program’s evolution was a grass roots effort, beginning with a crowdfunding campaign that drew support from people who soon became the first paying GreenToGo members. After the campaign those whose interest had been sparked began coming together to brainstorm ways to make the idea work.

“We met at a co-op grocery store, and all sorts of people came out to discuss program design and implementation, from Uber drivers to the health department, chefs, and residents,” Dreisbach reflects.

GreenToGo launched in 2017 as an all-volunteer operation and now has five paid employees, while volunteers continue to heavily support their work.

Don’t Waste Durham leveraged social media, distributed marketing materials, and trained restaurant staff on what the program was about and how to tap into it.

The project has grown – now up to 600-plus individual members and 26 restaurants and grocery stores, though the number of restaurants will trim down significantly while Dreisbach is focusing on what she calls other “higher impact reuse models” for providers of food services.

GreenToGo buys what was its first product—the pizza boxes—from ARRRC (which stands for Always Reliable, Reusable, Recyclable Container). It took some time for ARRRC Founder Mike Sudia to flesh out the design, and it’s taking longer to sell it at scale.

After a few years Sudia had an injection-molded, food-grade design, made of high-density polyethylene (HDPE) that’s tolerant of heat and cold, holds the pizza temperature well, is stackable for tight storage, and resistant to grease stain buildup.

“People that believe in zero waste and reduced waste look at this concept and say, slam dunk; why not?” he says.

Durham is clearly in that base of enthusiasts, though the fact that a nonprofit environmental group got behind the concept and pulled consumers and restaurants in differentiates the Durham scenario from many others.

Sudia has had a harder time going direct to restaurants and municipalities and convincing them to take the lead.

It’s a culture change, not to mention there’s a money factor. As he made cold calls to restaurants, he was hearing they typically had two-plus-year contracts to buy boxes preprinted with their name or logo. And they’d need space for both those traditional pizza pie holders and this new alternative.

“So, the question is, how do you integrate reusable boxes into the cardboard mentality that exists?

With municipalities I asked city council members how my reuse concept could fit in.  And they are not ready to do this either. They typically aren’t budgeted to give restaurants incentive to do zero waste beyond the normal things like compost and curbside recycling,” Sudia says.

The biggest buyers he says have been individual consumers who want an alternative to what ultimately ends up in the trash. Then there are some restaurant owners like one of his customers in California.

“He has a house that’s totally off the grid. He believes in this kind of thing. So, he buys the boxes and encourages his customers to use them,” Sudia says.

Pie Pushers is one of the Durham restaurants that’s bought in.

The small pizza operation started out years ago working out of a food truck, which is when it forged a relationship with Don’t Waste Durham who supports these vendors in offering “green” food service packaging at outdoor events.

“We had talked about the idea of reusable pizza boxes, but finding the right one, planning for a pilot and timeline ... there were a lot of logistics for GreenToGo to figure out and execute.  We were so happy, and honored, to partner with them for the pilot initially and still now, as the program continues,” says Becky Hacker, Pie Pushers co-owner.

Staff have to make space for the boxes and juggle getting them to the kitchen, but the adjustments really haven’t disrupted operations she says, and demand has grown.

“There are a lot of benefits …  the positive feedback from customers and staff; the excitement to be a part of this; the working relationship we continue to build with Don’t Waste Durham and GreenToGo; making a small difference to the environment; spreading the word; setting a great example,” Hacker says.

The nonprofit provides wash services for schools and other institutions and businesses that want their containers back. And it started what it calls the GreenToGo Dinner Club, a delivery mechanism for large group orders that launched in the midst of COVID-19, reducing the pile up of trash from spiking to-go orders.

Dreisbach says she wants to take the system to a larger and more comprehensive scale.

“Our ultimate goal is to take what we learned from GreenToGo and expand to a reuse system for packaging of any kind.  A reuse system should be part of any solid waste department, but in the meantime innovators in communities have a large role to play. This is an alternative that works, and we are doing this because we can’t wait for government to do the right thing on a large scale,” she says.