Hazmat Professionals Brush Up on Technology and Techniques During Arizona Drill

Southwesterners might like to brag that their summer heat is dry and tolerable when compared to the muggy East Coast.

But members of the Alliance of Hazardous Materials Professionals (AHMP) can attest that even so-called dry heat is close to unbearable—especially when the temperature rockets beyond 100 degrees and they’re decked out head-to-toe in full gear to participate in a Sept. 2 interactive training session in Tempe, Ariz.

The real-time, emergency-response drill—involving swimming pool chemicals leaking from a tractor-trailer—capped AHMP’s four-day 2015 national conference in nearby Scottsdale. That scenario allowed participants to be privy to the newest technologies and techniques deployed during a spill of hazardous materials.

“It was Sept. 2 at about 2 p.m. and it was above 100 degrees,” Cedric Calhoun, executive director of AHMP, tells Waste360. “It was toasty for us but especially so for those dressed in protective suits, respirators, masks and the whole nine yards.”

Of course, these professionals aren’t limited to transportation incidents. Responders are on the scene for natural and man-made disasters. They are trained to handle spills, leaks and releases of the full gamut of oil, chemicals and other hazardous materials in air, water and land.

Waste360 caught up with Calhoun after the conference, when he had returned to the air-conditioned AHMP headquarters in the Washington, D.C. suburb of Bethesda, Md.

Waste360: How did this scenario play out?

Cedric Calhoun: We all went to the Tempe/APS Joint Fire Training Center. A plume of white smoke was coming from the back of the tractor-trailer and hazmat teams had to investigate. It wasn’t clear if the load had shifted in transit or if the truck had been in an accident. 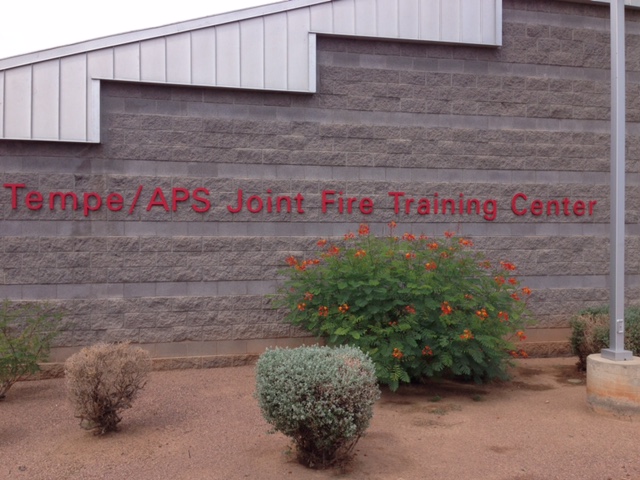 The first team had to enter the back of the truck cab to take readings and identify the materials and what their hazards were. It turned out to be boxes of chlorine, the low-grade liquid type typically used in backyard pools. Then, they went into the trailer to identify the leaking boxes. Part of that involved using an infrared thermometer to gauge if an already hot material was dangerously hot. Some of the boxes might have been damaged but not leaking.

The second team was tasked with removing and containing the material before team three was sent in to clean up the chlorine that had spilled. Team four went in and sealed everything up. The incident commander was directing everything the whole time.

Waste360: Why are these “rehearsals” important?

Cedric Calhoun: First responders know that your plan is a straight line but your reality is a squiggly line. They train because they know they’ll be thrown an unexpected hazard. Rarely does a plan go from A to Z as you thought. Actually, it doesn’t go to script 99.9 percent of the time. You have to be able to adapt and adjust.

Waste360: How was this particular training helpful?

Cedric Calhoun: First responders from Kary Environmental Services, an Arizona company, did the demonstration. It wasn’t just a quick run-through. Instead, they explained what each team was doing and why. They broke down the scenario and explained what was going on at each stage so everybody watching could understand what type of equipment they were using and what type of gear they were wearing. The audience was totally involved. We would hear the incident commander talking to the responders.

It’s an educational tool on a number of different levels. All the gear was passed around so we could get a hands-on feel for it. Observers could learn about new techniques and new technology that make everything safer, from identifying the hazard more quickly to executing the cleanup.

Waste 360: What kinds of new technologies are available in the field?

Cedric Calhoun: We got to see some really cool equipment. For instance, one patch with a sensor could measure how much oxygen each responder was using and another recorded each responder’s body temperature. The incident commander could read and track that information, and check in with each responder in case something didn’t seem right. Ten or so years ago, responders didn’t have the capability to talk back to incident commanders while on the scene. A lot of our folks don’t don personal protective equipment every day, so this was good exposure to new tools they could be using.

Waste360: Mistakes in this line of work can be fatal. Please talk a little about how these first responders foster trust with their co-workers.

Cedric Calhoun: When you are putting your life on the line in these situations, you have to be able to trust the person next to you—that they know what they are doing and doing the right thing—because the different teams of responders depend on each other so much.

When an incident commander is telling first responders to walk into something, they have to trust that they’re also going to be able to walk out. So, yes, they have to trust one another but they also have trust in their own capabilities, which requires being aware of changes and thinking on their own. And that’s why two-way communications technology is so important.

Waste360: Have you ever served as a first responder?

Cedric Calhoun: No, but my father is a retired Marine. I grew up in Jacksonville, N.C., a military town outside of Camp Lejeune. I admire anyone willing to put his or her life on the line for someone they have never met, and not ask for anything in return.

Also, I double-majored in biology and chemistry as an undergraduate, so I like to think I have a connection to the content of what AHMP does. I learned to manage non-profits during my pursuit of the Certified Association Executive credential, which I obtained in 2005. I’ve been at the helm of AHMP since landing here about eight years ago.

Waste360: From your perspective, are first responders made or born?

Cedric Calhoun: You can train to be a first responder but you don’t get there unless you want to do it. This line of work isn’t something you fall into; you have to make a conscious decision to go into it. They’ll tell you, “It’s my job,” but it’s a little beyond that. They’re responding to scenarios that most people are running away from and tell them they’re crazy because they’re running toward it.

To some degree they’re born to assist because they seem to be a completely different breed. You have to be selfless. Someone like me, I go into work at an office expecting to come home that day. But when you get in that squad car or fire truck or respond to a situation involving hazardous materials, you have to at least sometimes be thinking, “Today could be my last day.”

Waste360: Some conference attendees volunteered their time at the Scottsdale Training & Rehabilitation Services (STARS), a non-profit geared for teens and adults with developmental and cognitive disabilities. What did you do?

Cedric Calhoun: We reached out to the Scottsdale Chamber of Commerce to find a place that could use our assistance. STARS had two activity areas, a work room and an art room, that were brown and drab. We painted those rooms so they would feel like they had a better and more colorful space. To hear the squeals of delight from those teens and adults when we were finished made our five-hour investment of time worth it.

Waste360: Who organized that event and why?

Cedric Calhoun: It’s an initiative I pulled together five years ago. Beyond the money we spend in communities where we have our conferences, I wanted to figure out a way to give something back. We are able-minded and able-bodied and should be leaving these cities better off than they were when we came in.

This year, 20 to 21 of us participated, including the 12 members of our board of directors. It was a wonderful way of bonding and building camaraderie beyond the boardroom. We did the project on the Saturday before our meetings, so we were able to show a video clip at the opening of the conference. That was a big hit.